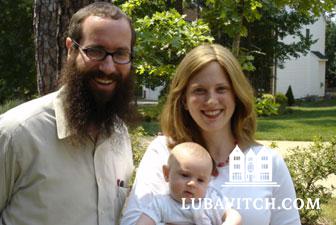 In an exclusive interview with Lubavitch.com, Rabbi Yossel Kranz, executive director of Chabad of the Virginias, named the young couple who formally accepted the offer to head the new Chabad House opening next month at Virginia Tech.

Rabbi Elazar and Rivkah Bloom, both with advanced science degrees and Chabad outreach experience, tied up loose ends with Rabbi Kranz late on Sunday. Earlier in the week,  an innkeeper chose Chabad’s bid for her bed and breakfast that stands a block from campus, to become the home of the new Chabad House, named for Liviu Librescu. The inkeeper gave V Tech Chabad six months to secure the funds to complete the purchase.

“It’s auspicious that we have ironed out the last of the wrinkles this evening—the eve of the beginning of the month of Menachem Av—a month symbolic of Divine blessings of healing and consolation,” Rabbi Kranz said.

When tragedy struck Virginia Tech last April, after a deranged students sprayed gunfire at students sitting in their classrooms, Rabbi Kranz pledged to open a Chabad center on campus to serve as a house of healing for Virginia Tech’s students, adding yet another to the 100-plus Chabad Houses on college campuses worldwide.

On their first tour of the campus, Rabbi Elazar, 31, and Rivkah Bloom, 25, noted orange and maroon banners that proclaim, “We will prevail” still dotting college grounds. In VT colors, they remind Blacksburg of that horrific day in April when student Seung-Hui Cho’s shooting rampage ended the lives of 32 people. Included in the carnage was Prof. Liviu Librescu, a Romanian-born Holocaust survivor, whose heroism during the shooting saved students’ lives and catapulted Chabad’s drive to open a campus center.

Prof. Librescu’s bravery became a source of much pride among the estimated 1,400 Jewish students at VT.

“They came out of the woodwork at that moment, and now many of them are really searching” for a way to understand that surge of Jewish feeling,” Rabbi Bloom told Lubavitch.com.

Both Blooms’ savvy mix of secular and religious qualifications makes their placement at V Tech a no-brainer.  Rivkah Bloom earned her Bachelors and Masters degrees from MIT. Rabbi Bloom carries parchment from University of California, S. Barbara in Environmental Science, a rabbinical ordination, and – nearly – a Masters in Jewish education.

The Blooms’ offbeat background is where they really get interesting. Crosses planted alongside the road into Blacksburg reminded Rivkah of her childhood in Charlotte, NC, driving through the Bible Belt. Rivkah’s parents took steps toward greater Jewish observance after Rivkah attended Chabad summer camp in Detroit. Rabbi Bloom is also a child of the south, sort of. Raised in Florida, Elazar Bloom attended Hillel Day School of North Miami Beach. After graduating from a Jewish high school, he got to know Chabad during college and went on to study in yeshivas in Jerusalem, New Jersey, and Massachusetts. The Blooms cut their milk teeth as Chabad representatives in Milwaukee, where they assisted Rabbi Yisroel and Brocho Devorah Leah Shmotkin. Experiencing the Shmotkins’ “devotion to the community, after 40 years of shlichus,” said Rabbi Bloom tuned his approach to outreach.

Though the Blooms will get their chance to invite VT students to share a Shabbat meal starting in August, they’ll have to wait at least six more months before welcoming Hokies to the B and B. It’s by that date that the Blooms will know if the $1 million L’Arche Bed and Breakfast with its six guest bedrooms, owner’s suite, colonnaded porch, gazebo and 4,650 sq. ft. of Southern charm is theirs.

“The owner wanted her home to be used in a meaningful way to memorialize the hero of V Tech,” said Rabbi Kranz. “Now we want to get the word out, and find the money to buy the place so we can make this happen.”

Contributions to the Librescu Chabad House at Virginia Tech can be made online at http://www.chabadofva.org.

Related Articles
View All
Victim of Virginia Tech Shooting To Be Flown to Israel Wednesday
Beginning with Tuesday's convocation at Virginia Tech, faculty, family and others connected to those killed in Monday's massacre at the university, will start a process…
A Time To Cry, A Time To Act
Virginia Tech students sat quietly, some weeping at the Blacksburg Jewish Community Center’s brief prayer service Tuesday night, too overcome, too emotionally exhausted to do…
New Chabad House To Open At Virginia Tech
Lubavitch of the Virginias, headed by Rabbi Yossel Kranz, will be opening a new Chabad House at Virginia Tech in Blacksburg, Va, to serve the…
A Brighter Shabbat for Students on Campus (video clip)
This past Friday night, Jewish women on college campuses across America participated in an initiative to dispel some of the darkness experienced by events of…
Guest Editorial: Random Kindness in the Face of Random Terror
Up until the morning of April 16, things were pretty much happening as they should on most American campuses at this time of year. Students and…
Campus
Two Universities React as Antisemitism Steps Out of the Shadows
While college administrators debate the limit of free speech, Chabad campus leaders take action.
Campus
Popping Bottles With Intention
“I’m still popping bottles, but instead of popping them at a bar or nightclub, it’s at the Shabbat table. It’s the same hustle but with…
Campus
Israeli Minorities Find A Platform at Stanford University Chabad
Less than twenty-four hours before it was due to begin, an event scheduled to take place at Stanford University’s Hillel facility earlier this week was…
Campus
In Irma Aftermath, Campus Chabad Stays Put and Open
"A disaster like Hurricane Irma can be frightening, but it also brings people together and highlights the wonderful community on campus."
Get Inspiration to your inbox!
Newsletter
Join our weekly newsletter for inspiration and updates
Donate
Find Your Local Chabad Center
Chabad
About Chabad-Lubavitch
About Chabad Lubavitch
The Rebbe
Headquarters
Magazine
Magazine
News
News & Updates
In The Media
Impact
Social and Humanitarian
Social and Humanitarian
Education
Education
Community
Community