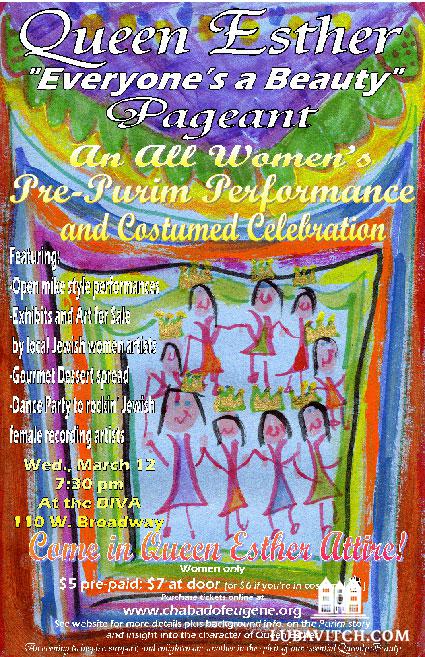 All News
By Dora Chernock , Eugene, OR

(lubavitch.com/LNS) On March 12, a royal court of Jewish princesses will gather in Eugene, OR.

The upcoming holiday of Purim celebrates the heroics of Queen Esther, and Chabad of Eugene is determined to give Esther her royal due. Raw foodists, musicians, ceramicists, painters, poets and dancers will interpret Purim’s message at the “Queen Esther ‘Everyone’s a Beauty’ Pageant,” an open mike, art and performance event at The DIVA, a community art center and gallery.

More than a feast for the senses, the pageant will challenge America’s beauty ideal with the Jewish take on inner beauty.

“Society’s idea of beauty is skewed,” said artist Laneia Seumalo, who will be presenting several pieces at the pageant. The event “will reinforce the power that is inside each of us as Jewish women. It will make us aware of the power within.”

Seumalo graduated University of Oregon in Eugene in August with an art degree. While she hunts for studio space in Portland, she’s started a painting especially for the event. Still in the beginning stages, she’s envisioning shapely trees that evoke the woman’s role as life giver, life sustainer.

An event to showcase the creative works of Jewish women has been a longtime dream of Aviva Spiegel, co-director of Chabad of Eugene. “Everyone has beauty to share with the world, and it will only shine if it is received by another,” said Spiegel. “It is really exciting for me to be providing a forum where creative Jewish women are appreciated and heard.”

The by women, for women – only – vibe of the evening rides an undercurrent of Jewish women’s performances that has been rolling from LA, to the east coast, across Europe and Israel. Last month, Kol Haneshama Performing Arts Conservatory, an all Jewish, all women consortium, in southern California debuted their first all-women movie. In New York, Nishmat Hatzafon’s all-female Jewish dance troupe has performed for standing-room-only audiences along the eastern seaboard.

In the wider culture, feminist artists have reemerged on the museum scene. WACK! Art and the Feminist Revolution, which attracted crowds at the Museum of Contemporary Art in LA, opened this month in the New York Museum of Modern Art affiliated space, P.S.1.

Art – visual and performance – conveys more than a lecture ever could and is unique in its universal language, making it a transcendent kind of medium. It’s why a very diverse crowd is expected at the pageant. Students from University of Oregon, local artists from Eugene, Jewish community members of all shades have signed on to showcase their works at the event. Final reviews of all pieces and performances will take place before March 5.

Showing up dressed as a queen is worth a dollar off the modest $7 admission. University of Oregon women who participate in Spiegel’s art workshop at Hillel in March will create crowns just right for wearing at the event. Spiegel, an artist in her own right, is busy completing her copper tiara with semiprecious gems to wear as the QC, Queen of Ceremonies, of the show.

The one night pageant could be the start of something bigger.

“Women who get together and sing, express their desires through painting, through art, have shaped their communities, the culture,” said one of the event’s organizers, Jamie Zebrak, a psychology and international studies major at U of O. It’s important that the event will be more than Jewish women looking at art or watching a show. The event will involve hearts and minds.

“Jewish women as a collective – now that’s a force.”