Novosibirsk: Purim Will Be Joyful Despite Anti-Semitic Posters 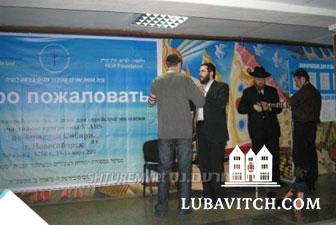 Jewish students from Russia are welcomed to a Chabad-sponsored educational program in Novosibirsk.

(lubavitch.com/lns) Authorities in Novosibirsk have yet to determine who was behind the anti-Semitic posters put up on the doors of residential buildings in this Siberian city earlier this week.

Chabad’s Rabbi Zalman Zaklos, who heads the Jewish community (pop. approx 20,000) in Russia’s third largest city, is working with the police and city officials to identify the source of the posters that revive the primitive blood libel, calling on residents to protect their children from Jews who “kidnap small children" and use their blood to prepare matza.

Anti-Semitism is not new to this area, but the graphic posters reflect an extreme aggression that is disturbing, Rabbi Zaklos told Lubavitch.com in an interview Thursday morning.

About two months ago the Jewish community won a protracted case against Boris Mironov accused of publishing viciously anti-Semitic literature.

“It took us two years to finally have him convicted,” says Rabbi Zaklos, but Mironov was forced to stop publishing his material.

The real concern is that the posters prey on the ignorance of many locals who may easily be duped into believing what they read. Zaklos says he is urging stronger intervention by the authorities.

Though the posters “create a very unpleasant feeling here,”  they will not disrupt the joy of Purim or the level of participation in the holiday’s festivities, promises Zaklos. He expects 500 to show up at the main Purim celebration, to take place on Sunday in a rented hall.

“The only way to dispel this kind of darkness is with a lot of light,” he says, taking a lesson, from the light that came to the Jewish people after the threat and darkness in the story of Purim.

This provocation comes at the same time that a report by the U.S. State Department on Contemporary Anti-Semitism was released, with findings of an upsurge in all forms of anti-Semitism, including traditional violence against Jews around the world, with Russia mentioned at the top of the list.

"Today, more than 60 years after the Holocaust," says the report, "anti-Semitism is not just a fact of history, it is a current event."