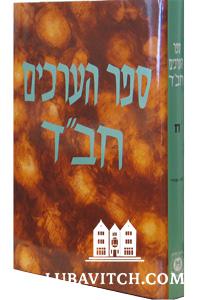 Beginning with the Hebrew entry “az” (alef-zayin) and ending with “echad” (alef-chet-daled), the volume covers a range of topics from “hyssop grass” (an ingredient of the Passover and Parah Adumah ceremonies) and the meaning of fraternity, to the unity of G-d.

This newest volume represents just one slice of a monumental project aimed at explaining issues raised in the discourses of the Chabad Rebbes. Although the encyclopedia’s primary function is to define the often complex and arcane terminology found in works of Chabad Chasidic philosophy, entries also explore the spiritual and psychological meaning of particular mitzvoth, as well as their practical application.

The tradition of organizing concepts in Judaic thought is not new. Rabbenu Bachya ben Asher (d. 1340) compiled Kad Hakemach, the Encyclopedia of Torah Thoughts. Closer to our times works such as the S’dei Chemed, an eclectic compendium of concepts in Jewish Law, was published by Rabbi Chaim Chezekiah Medini of Crimea, Ukraine, in 1890, and the Talmudic Encyclopedia—a current project which aims at summarizing Talmudic discussions and their relevant Rabbinic commentaries—have taken a prominent place in Torah literature.

The Sefer Ha’Arachim project is unique in its focus on the texts of the Chabad Chasidic movement. Despite the movement’s renown for unique depth of explanation and analysis, it had yet to organize themes and terms in an easily accessible way.

Chabad Chasidic works—scattered among some 700 volumes of discourses, books and letters—were typically culled from oral sermons on the weekly Torah portion or the various holidays, making the task of indexing particularly difficult. Students seeking to research the discussion on a pertinent topic would have little resources to help them reference it, or to find related discussions.

In a letter written in April of 1971 to the editor of the Talmudic Encyclopedia, Rabbi Shlomo Yosef Zevin, the Lubavitcher Rebbe, Rabbi Menachem Mendel Schneerson, of blessed memory, explained the impetus in spearheading the project. Despite the absence of a precedent for a project of this kind—a single concentrated work indexing the concepts discussed in Chabad Chasidic philosophy, the Rebbe explained that the task seemed “particularly fitting to the outlook of Chabad’s philosophical theory,” given that one of its core components is the analysis of various spiritual concepts in a clear and defined manner.

Indeed, in 1942, after he was appointed the head of Kehot, the publishing arm of the Chabad Lubavitch movement, the Rebbe began the process of publishing edited and indexed versions of the various fundamental works of the Chabad Rebbes.

The job of leading the project ultimately fell to Rabbi Yoel Kahan of Brooklyn. Rabbi Kahan, who was born in the Soviet Union and raised in Israel, was at the time already well known for his brilliance in Torah and Chasidic philosophy. One of the Rebbe’s “chozrim” it was his job to memorize the Rebbe’s Shabbat talks, when electronic recordings and even note-taking are forbidden, and then write the entire discourse verbatim after the conclusion of Shabbat.

Based on directives of the Rebbe, Rabbi Kahan set about the daunting task of leading the editorial board for the encyclopedia. The resulting first volume, published in 1970, included an appendix, a discourse specially delivered by the Rebbe on the essence of Chasidic philosophy and its expression in all aspects of Torah study.

While a collaborative effort between a team of scholars lies behind the project, Rabbi Kahan’s scholarship is its driving force.

His unique approach to the subject and his encyclopedic breadth of knowledge are well reflected in the encyclopedia’s entries. Beyond the basic definitions for the terms discussed, his scholarship is particularly evident in the addenda to the book that delve more extensively into the entries, and provide additional analysis of tangential topics.

Soon after the release of the initial volume, the Sefer Ha’Arachim assumed an integral role in the study of Chasidic works and ideas.

The breadth of discussion in its entries can at times seems overwhelming, but the encyclopedia has allowed for the clarification of essential concepts in Chasidic study. According to Rabbi Y. Paltiel, who lectures on Chasidic thought and is a teacher in United Lubavitcher Yeshiva in Brooklyn, Sefer Ha’Arachim has proved useful in his research.

“Chasidic texts can be very deceiving when studied superficially,” he says. “Often the text can seem very repetitious in nature to uninitiated. Sefer Ha’Arachim delineates the subject at hand forcing the student to see the subtlety of the text and come to a proper understanding of the subject.”

The volumes of Sefer Ha’Arachim Chabad have been used in the study of Chasidic thought beyond the yeshiva, in the broader academic world. Elliot R. Wolfson, a professor at NYU and scholar of Chasidism, has used it in his research, calling it a “useful tool for the academic and the non-acedemic, [that] makes the material more accessible.”

Though preferring to study from source material as opposed to reference works, Wolfson has used Sefer Ha’Arachim’s entries for clarification and direction, noting that “it is very useful to have this systematic presentation of the key concepts, symbols, and terms that inform Chabad philosophy.”

The current volume joins the preceding entries in discussing fundamental topics of Jewish faith. Previous volumes included entries on the meaning of love in Chasidic terminology–both the immutable love between the Creator and the Jewish people, as well as the love between two people—the Kabbalistic understanding of the letters of the Hebrew alphabet, and the revelation of the infinite essence of G-d’s divine ‘light.’

According to Rabbi Sholom Charitonow, who joined the editorial team in 1981, among the most essential concepts addressed in the current volume are its analysis of the unity of G-d, specifically as expressed in the Shema prayer, the fundamental affirmation of Jewish faith.

“While there is no official title to this volume,” he said, “its implied subtitle is the underlying concept of [G-d’s] unity and its pervasive presence in our lives.”

The next volume of Sefer Ha’Arachim Chabad is slated for release in the mid-2011.

The volume is available online, at: www.kehot.com.