First envisioned by the late Rabbi Daniel Moscowitz, the already-iconic building is eight years in the making. 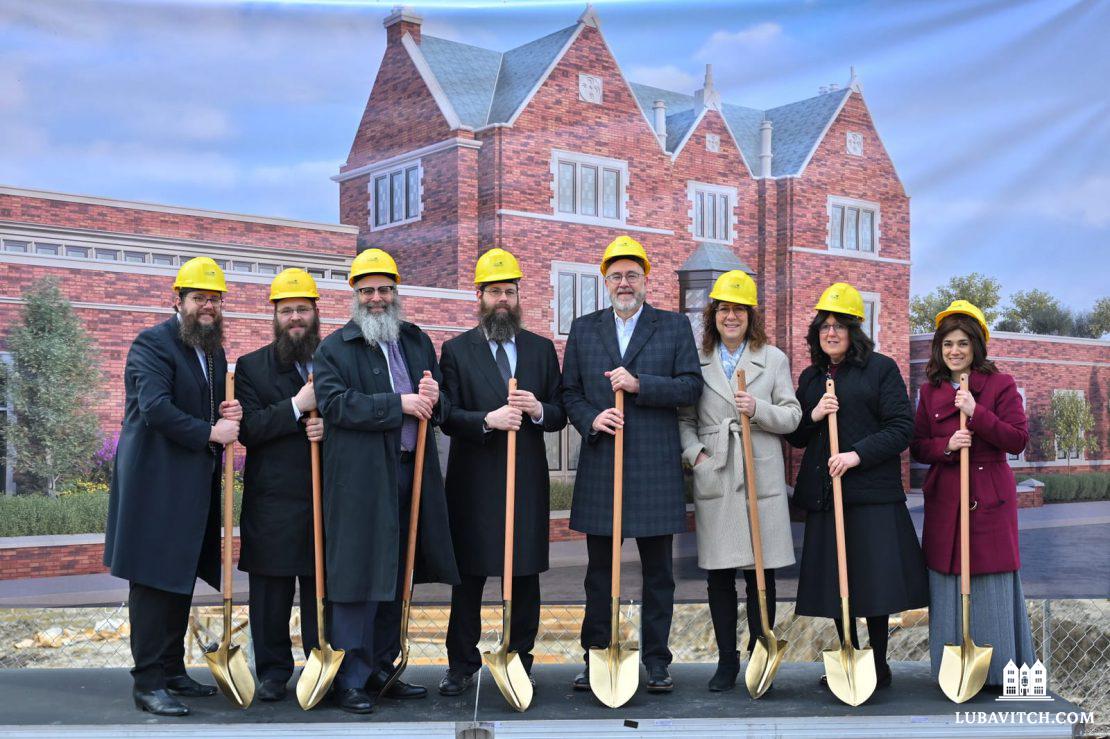 A jubilant crowd cheered as dozens of rabbis donned hardhats and gripped shovels to break ground in Chicago on a new replica of the Chabad Headquarters building in Brooklyn. Intended to house a synagogue and Lubavitch Chabad of Illinois’ headquarters, the building has been a decade in the making.

When Rabbi Daniel Moscowitz was appointed Chabad’s regional director to Illinois in 1979, he was just twenty-five years old, and Chabad’s regional activities were just getting started. Within just a few years, he and his wife Esther Rochel had launched a summer camp, a day school system, and programs for youth and seniors. Before long, they were bringing in other couples as emissaries to open Chabad centers in the suburbs.

In 1995, Rabbi Moscowitz and Rabbi Baruch Epstein rented a run-down storefront with mushrooms growing from the carpet. They cleaned it up and opened Bais Menachem, a synagogue on the northern border of Chicago’s Rogers Park neighborhood whose motto said it all: “it’s not just a shul, it’s a family.” Rabbi Epstein’s Torah classes were a hit, and together with Rebbetzin Chaya Epstein’s “Women to Women” classes, they formed the nucleus of a warm and vibrant community.

The Bais Menachem building had office space to host the main offices of Chabad of Illinois, and its ideal location soon made it a hub for the growing number of Chabad emissaries in the state. “Every corner is taken,” Rabbi Epstein says with a laugh, “shluchim are squeezed next to each other with their laptops.” Chabad’s schools are nearby, as is a kosher supermarket, making Bais Menachem a convenient stop for rabbis and rebbetzins who commute into town for the day.

In the early 2010s, Rabbi Daniel Moscowitz began laying the groundwork for a building that could house a proper headquarters for Chabad’s activities. “He wanted to create a space where shluchim can come to rejuvenate and collaborate with their colleagues in a very convenient location,” says Rabbi Yosef Moscowitz, who worked with his father from the first moments of the project. He selected a design that paid homage to “770”, Chabad’s World Headquarters in Brooklyn, replicating its iconic three-pointed red brick facade. Soon Chabad was assembling properties on bustling Howard Street for the build. But in 2014, Rabbi Daniel Moscowitz tragically passed away after routine surgery at the age of fifty nine.

Picking up the mantle of their father’s leadership, Rabbi Meir Moscowitz and Rabbi Yosef Moscowitz continued developing the project. The build has energized the Chicago Jewish community, and small donors have provided primary funding for the project.

Mrs. Beatrice Crain recognized that the new Headquarters would have an outsized impact on Jewish life in the entire state. “Give shluchim the support they need, and you turbocharge the work they’re already doing throughout the state,” says Rabbi Yosef Moscowitz. Mrs. Crain dedicated the building in honor of her son, naming it the Michael S. Maling Chabad of Illinois Headquarters.

The Maling building will host a Shluchim Center, dedicated by the Walder Foundation.  It will give Chabad’s emissaries a central meeting ground and a community base. “Instead of spending the day at Starbucks, shluchim who drive into the city for the day will have a custom-made space to work, prepare classes and learn from each other,” Rabbi Yosef Moscowitz says. Equipped with a research library, play space for children, and even an exercise room, the Shluchim Center serves the practical needs of the Chabad emissaries.

The Bais Menachem Chabad Center, now led by Rabbi Epstein and Rabbi Eliyahu Rapoport, will also be housed in the new building. It gives them ample space to continue serving up a plethora of programming for the local community. “Right now, we’re running programs over Zoom, and in our living rooms,” says Rabbi Epstein. “The new building will give us a beautiful space to bring them all together.”

Wednesday’s groundbreaking happened just in time for the 120th anniversary of the Lubavitcher Rebbe’s birth. Howard Street was closed down for the event, and an eager crowd of hundreds of community members, dignitaries, and even schoolchildren participated. Alderman Debra Silverstein shared greetings and spoke about the excitement this project has stirred up throughout the community. After the ceremony, twenty-two Chabad Mitzvah Tanks paraded out across the city, delivering handmade matzah and other Passover supplies.

The new Headquarters’ iconic architecture will certainly catch the attention of passersby, and Rabbi Meir Moscowitz says that the design conveys the building’s message. “Seven-seventy is a building that symbolizes bringing the light of Torah to the world,” he says. “This building will provide a warm home for the local community and will also be a lighthouse, shining out to the entire state.”