Sukkahwood Brings People Out to Come In 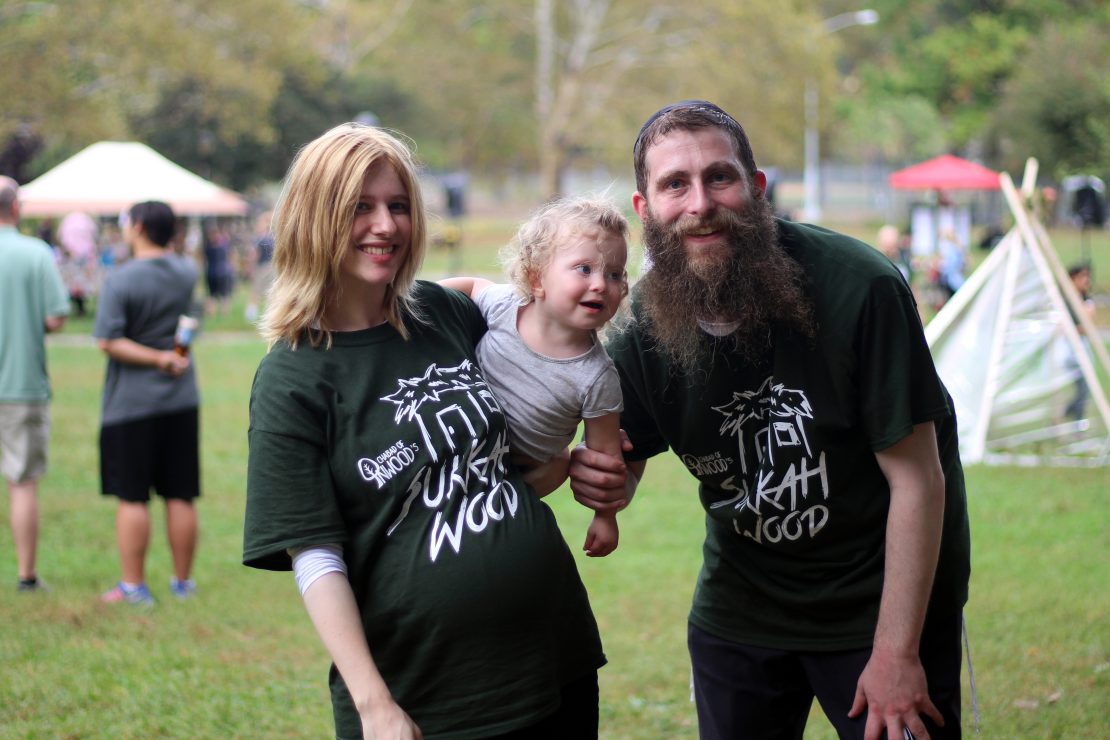 To get her sukkah to Inwood Park in Manhattan on Sunday, artist Shaina Denburg detached its walls. But even in pieces, it didn’t fit in her rented U-Haul. So she completely dismantled the frame and drove it several hundred blocks north of her Brooklyn studio. Upon arrival, she carefully put the pieces back together.

But even then, it wasn’t ready.

Denburg’s creation, entitled “Collaborative Sukkah,” was one of six designs presented at Sukkahwood’s Temporary Dwelling Art Installation, a project of Chabad of Inwood and Art Kibbutz New York. Abiding by the parameters of a kosher sukkah, select artists were tasked with creating temporary dwelling art installations in their medium of choice. Some 700 visitors came to explore and admire during Sukkahwood’s first annual celebration in conjunction with the nine-day Autumn holiday.

Riffing off Sukkot’s theme of unity, Denburg’s sukkah began the festival as a wooden frame. Visitors were invited to thread thousands of multi-colored chains across its length, completing it in a communal effort. “This holiday only truly comes alive and takes on meaning when we are together,” shared the 29-year old. The chains, she explained, symbolize the Jews’ eternal connection based on maintaining tradition. “My concept really is about the core of the holiday, inviting guests and having all kinds of Jews come together.”

Coming together was the theme of Ali Shrago-Spechler’s contribution as well. Entitled “Pass the Schmear,” the artist’s sukkah was made entirely of bagels. 400 of them. The yeasty rounds formed the frame and were strung across to create walls. Date and sun palms, a nod to her Israeli and Floridian heritage, were splayed on top, as schach. Bagels, Shrago-Spechler believes, are more than a Jewish nosh. “They are a powerful symbol. People say, ‘I know about Judaism, I love bagels!”

As a child, Shrago-Spechler gathered with her cousins and grandparents for bagels in her Florida home, a tradition several generations deep. Sunday’s sukkah paid homage to the artist’s mother, an artist herself, whose first installation in the 1970s was a ceramic brunch of bagels, lox, and cream cheese. Shrago-Spechler had one of her mother’s original bagels on hand. Her own bagels, donated by City Harvest (one of the event’s co-sponsors), were week-old rounds sprayed in polyurethane for protection.

City Harvest was one of 17 corporate and cultural sponsors who helped fund and promote Sukkahwood. The event was also possible due to New York City’s support: the City Parks Foundation gave Chabad a $5000 grant and permission to set up shop in the park. “As we reached out to organizations and artists, we quickly recognized the universal appeal of this project,” says Rabbi Herschel Hartz, Chabad’s representative to Inwood and Sukkahwood’s creator. “We were able to bring the theme of Sukkot, a somewhat abstract holiday in America, to the mainstream. People loved it.”

For Elise Silverstein, a medical professional from Brooklyn, creative sukkahs were a real novelty. But she found the crowd just as energizing as the structures themselves. “The diversity of the attendees was inspiring and really drove home the theme of unity that is a part of Sukkot,” she shared on the grassy lawns. “I love seeing how all the different artists approached the idea of a sukkah and the thoughtfulness that went into the concept behind each one. It’s really cool to be at an event encouraging art and supporting artists.”

Google Maps said it would take Asherah Cinnamon and her sukkah five hours to get from her Maine home to Manhattan. It took eight and a half. Her sukkah, “Brief Sanctuary,” made the trip strapped to the top of her blue car. It was a long journey, but its symbolism of refugees on an endless journey themselves, needed to be shared.

Cinnamon was born in Shanghai. Her parents were Holocaust survivors, refugees from Vienna and Germany. Throughout her migratory childhood, they told her stories of the Austrian woods. It was only when she came to the forests of Maine as an adult that she really felt grounded, at home. “Refugees are part of the story of Sukkot,” Cinnamon stated. “They had recently left slavery and were wandering the desert in search of a home. They believed the promise. Today, we have hundreds of thousands of refugees looking for a safe space. It’s the story of history.”

As with the other artists, Cinnamon put a strong emphasis on sustainability and affordability when choosing her materials. The maple branches came from her own property (“I love my chainsaw”) and the plastic bags she hand-sewed together allude to a refugee’s need to use whatever is available. The stripped branches represent the vulnerability of the refugees and were painted in red to symbolize that “Jewish people are alive. The blood is flowing through our community.”

“The Sukkahs showed me that the traditional square with evergreen on top is only a start, an opening: there are so many options, so many possibilities to make a sukkah not only unique and artistic, but personally meaningful as well,” said Doug Pein, a 30-year-old marketing executive from the Midwest. “For example, the bagel sukkah showed me that you can create something beautiful, religious, and holy from what many might consider to be simply waste product.”