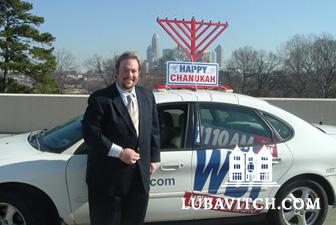 Like chocolate coins in plastic mesh bags, Chabad rabbis driving around with menorahs strapped atop their cars are familiar sights during Chanukah. A surprising trend is the many “civilians” who follow suit.

Randy Defilipp has been driving in the Charlotte’s Car Menorah Parade for years, and leaves the menorah on her Suburban throughout the holiday. “In this part of the world, the menorah creates a lot of positive energy. People wave, high five me, tell me about their Jewish memories out of nowhere.”
Having non-rabbis driving menorahs takes the holiday symbol where it’s rarely seen. Defilipp’s car gets a lot of attention at Charlotte Latin School’s carpool time. As a premier prep school in North Carolina with student clubs like “La Table Francaise” and “National Junior Classical League” and an orchestra that travels to Beijing to give concerts, Defilipp and her car menorah provide an unexpected dose of Jewish awareness.

When those reached by Chabad encourage other Jews to take part in Judaism, it fulfills the vision of the Lubavitcher Rebbe. Rabbi Menachem M. Schneerson, of righteous memory, saw every Jew as a potential lamplighter, dispelling the world’s darkness by sharing the light with acts of goodness and kindness.

This will be the first year a student at Franklin and Marshall College in Lancaster, PA, will be driving with Chanukah lights (electrically) ablaze. Mike Morgenstern quickly accepted Rabbi Elazar Green’s offer to strap on the menorah. “My love for Judaism and my hope to educate and inform other non-affiliated Jews about our beautiful religion motivated me. I really love Chabad and am willing to help out in any way to take part in Jewish outreach,” he told Lubavitch.com. Other board members will have stocks of Chanukah kits to distribute to any of the 200 Jewish students who need them.

Rabbi Green expects Morgenstern’s eye catching car menorah will also “increase awareness of what Chabad has to offer to Jewish students here.” Morgenstern anticipates some “weird looks,” but he’s up for it. Growing up in Potomac, MD, he saw car menorahs everywhere. People laughed and “others [were] truly intrigued. “If we reach one person and help them celebrate Chanukah, then it is a success.”

Exactly how many non-rabbis drive around with menorahs remains a burning question. Car menorah parades cruise the streets in Melbourne, Miami, Maryland, Montreal and many more. Numbers of car menorah sales have risen this year according to Nochum Goldshmidt, owner of Carmenorah.com. Goldshmidt packed up his patent pending LED lit menorahs destined for Kazakhstan, Hong Kong, and Cologne, Germany. Careful menorah designs that don’t scratch the car and stores flat has made it easier for people to join in the experience.

In Boca Raton, FL, driving your own menorah has caught on with the full gamut of Jewish community members. Within the span of just a few days, Rabbi Shmuly Gutnick, youth director of Chabad of Boca Beaches, received confirmation that the driver of a Rolls Royce would need a menorah and a request from the King David Motorcycle Club to roll with the parade. Rabbi Gutnick, who builds and wires his own wooden menorahs and paints them fluorescent orange, said illuminating menorahs for motorcycles is a challenge because they don’t have lighters and require battery power.

An opportunity to share the light, as it were, appeals to many who aren’t the usual Chabad crowd. Last year, the car menorah phenomenon reached radio talk show host Jeff Katz. Most days, Katz is “your voice of liberty” at the mike of the 50,000-watt WBT during drive time in the Carolinas. He took the wheel as the grand marshal of Chabad Lubavitch of North Carolina’s car menorah parade last year.

“I had never seen anything like this!” Katz told Lubavitch.com. “It was a great opportunity to educate non-Jews on the holiday and I found that very rewarding. I have celebrated Chanukah my whole life and never once did I dream of something like this. What a thrill!”

The impact of being a lamplighter doesn’t end once the holiday’s eight days are over. Every time Brad Rabinowitz pulls into his garage in Charlotte, he sees his car menorah awaiting its moment to shine. It becomes “Jewish wall art” and reminds Rabinowitz “How happy everyone is to see menorahs on the road.”