Menorah Lights To Shine At the Games 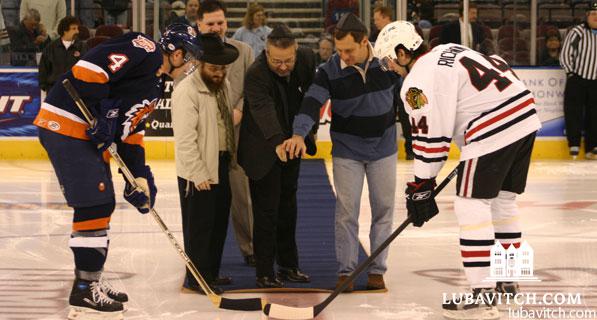 (lubavitch.com) The Chanukah holiday, as wildly popular as it has become, was barely known several decades ago.  But Chabad’s holiday awareness programs with olive presses and dreidel houses, menorahs carved of ice, chocolate and every conceivable material, have put the message of the holiday at the forefront of the winter season.

Today, public Menorah lightings have become a fixture in hundreds of locations across the globe. Celebrities and public officials vie for the honor of kindling of the lights. In town squares and shopping malls and along well-traveled highways, the Menorah lights are a familiar sight. And this Chanukah, they’ll illuminate sporting arenas coast to coast.

PORTLAND TRAILBLAZERS
“We invite fans to share the joy and festivity of their Chanukah celebrations at the Rose Garden,” says Sarah Mensah, chief marketing officer of the NBA’s Portland Trail Blazers. The Trailblazers and Chabad of Oregon are expecting the largest crowd in the history of the event, with more than 530 tickets already sold.

Former team owner, Mr. Harry Glickman, will kindle the Menorah lights at halftime. Twenty children from the Portland Jewish community will get a chance to high-five the players before the game, says Rabbi Chaim Wilhelm.

Rabbi Pinny Andrusier, of Chabad of Southwest Broward said he was approached by the Miami Heat to partner in a Jewish Heritage Night celebrating Chanukah. “An employee of the Heat had previously worked with the Portland Trailblazers and saw the success of the Chanukah program,” Andrusier said. “Knowing the demographics of South Florida, he thought it would be the perfect event for our community.”

More than 1500 tickets have already sold for the game at the American Airlines Arena on Tuesday, December 15th. Popular Jewish rock band, 8th Day will perform a pre-game on court concert and a halftime show from the concourse.

“They are very popular of late, and with their name, 8th Day, it is apropos that they be the group to perform,” Andrusier said.

The halftime show will broadcast throughout the arena and will also feature a Chanukah message from the rabbi. Before play resumes, a presentation will be made to the team. One of the club’s former star players will accept an award on behalf of the team. A post-game Chanukah party on the court is planned especially for Patrons of Jewish Heritage Night.

TAMPA BAY LIGHTNING
At the St. Pete Times Forum in Tampa, FL, the NHL’s Tampa Bay Lightning will be hosting groups from 10 Chabad Centers from the Tampa Bay area to celebrate Jewish Heritage Night on Wednesday December 9th. Tickets purchased through www.jewishhockey.net at $20.00 will gain fans access to a pre-game Chanukah party which includes the kindling of the Menorah by team owner Craig Sher. Tickets also net fans a seat, kosher hot dog and special souvenir.
Rabbi Mendy Dubrowski, director of Chabad of South Tampa said scheduling did not allow the event to actually be on Chanukah, but has allowed them to partner with Tampa’s Jewish Family Services for a toy drive.

“The main purpose is to give back. Instead of just celebrating ourselves, we must see that others receive the opportunity to celebrate as well.” Fans are encouraged to bring along a wrapped gift to donate to the drive. In addition to local synagogues and youth groups that will be at the arena, the Jewish War Veterans group will present the color guard prior to the game.

NORFOLK ADMIRALS
In Norfolk, VA, the Lightning’s minor league affiliate Norfolk Admirals has paired with Chabad of Tidewater for the second time to bring the joy of Chanukah to Scope Arena. The team approached Chabad in early October to express interest. “By having a Chanukah celebration in Scope Arena, we are allowing many people to experience the lighting of the Menorah and learn something from the message of Chanukah,” says Mrs. Rashi Brashevitzky, director of youth programming.

At Scope Arena on December 16th, there’ll be latkes and donuts; Chabad’s dreidel mascot will be greeting fans and handing out Chanukah gifts to the kids to the backdrop of Chanukah musica. An ice sculptured Menorah will be kindled between periods.

NEW YORK ISLANDERS
On December 12th, At Nassau Coliseum in Hempstead, Long Island, Rabbi Yossi Lieberman will be kindling the second Chanukah light accompanied by two local children. The Menorah will be placed on the Red Carpet on the Ice between periods of the evening’s New York Islander’s game, and Rabbi Lieberman will share the message of Chanukah with the thousands of fans. Kosher food will be available and Chanukah materials will be freely distributed.

Mitchell Nathanson a member of Chabad of West Hempstead said Rabbi Lieberman’s enthusiasm and commitment inspired him to get involved. “If we reach one person that didn’t know it was Chanukah, that will ignite the light,” Nathanson said. “He’ll get a menorah for his family and that will spread the light in their home. It’s all about touching people.”

Rabbi Lieberman said the Islanders had dedicated the evening’s “Charity of the Night” 50/50 raffle to the Friendship Circle of West Hempstead. Last year the raffle garnered FC nearly $1,500.

HOUSTON ROCKETS
Chabad Outreach of Houston had partnered with the Houston Rockets once before. The relationship began when Rabbi Dovid Goldstein met Evan Gelber, the team’s official videographer. The two presented the idea to the team and this year, Hoops & Hanukkah returns to the Houston Toyota Center on Tuesday, December 15th. Chabad’s efforts are joined this Chanukah by the Jewish Federation of Greater Houston and the Houston JCC.

In an interview with Lubavitch.com Rabbi Mendy Traxler said there would be a pregame Menorah Lighting outside the arena and a special post game Chanukah party for the first 100 Hoops & Hanukkah tickets sold.

“During halftime, we will have the opportunity to bring Chanukah to the nearly 18,000 fans at the game,” Traxler said.

The message of Chanukah, says Rabbi Goldstein, is relevant to everyone, Jewish or not. “We’ll be on the court for just a few minutes and in that time we will deliver a universal message.”

The message? Kindle your light, and add your gift of goodness and kindness to the world we share.