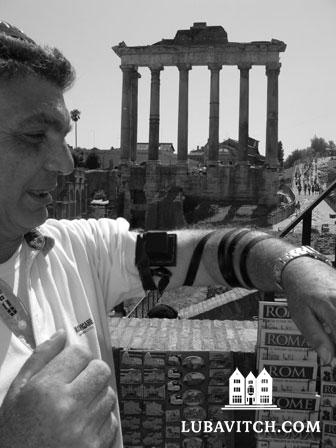 (lubavitch.com) After hours of travel through the back-roads of the Rocky Mountains, Rabbis Daniel Cowen and Asaf Advocat, two young rabbis on the Chabad-Lubavitch community enrichment program, or Merkos Shlichus, as it is referred to, have reached the last leg of their day trip, the town of Pueblo, Colorado. Pushing aside empty soda bottles, half-eaten bags of chips and mapquest print outs, the two emerge from their car with a flurry of the red dust for which the state of Colorado is named.

In a land where the ten gallon cowboy hat and not the black fedora is considered a fashion statement, the rabbinical students will nevertheless reach out to Pueblo's small local Jewish community, and visit with them at the local synagogue.

Beryl Sims, a retired computer scientist whose research in the early 70s was important in the development of the Internet, is among the locals waiting to greet the rabbis. He walks over to Cowen and embraces him warmly.
"You don't know how happy I am to see you two," he says, a large toothy smile spreading across his face.
Living in a small Jewish community isn't easy for Sims. He uses the Internet to further his Jewish learning, but acquiring even such basic provisions as kosher meat is difficult.
"The other day I was praying, and asked G-d to help me further my commitment to Judaism. When the president of the Jewish community called me and said that we would be visited by two rabbis . . . I was overjoyed."

This scene will repeat itself countless times over the course of this summer, as 400 young rabbis, most only in their early twenties, set out in pairs to some 185 destinations around the globe. On the list of places to be visited this year, a group of 12 rabbis will be heading out to Beijing, Shanghai and Hong Kong, to help with the influx of tourists for this Summer's Olympic games. New on the itinerary of this year's program are the Marshall Islands, Guam and Cartagena, Colombia.

From the lone backpacker in the Peruvian Andes to bustling tourists along Sardinia's Mediterranean shores, the rabbis will seek out even the solitary Jew, no matter the distance.
Established sixty years ago by the previous Lubavitcher Rebbe, Rabbi Yosef Y. Schneersohn, the idea of this program was to reach out to Jewish people living in places without the benefits of a Jewish community and help plant the seeds to establish a Jewish infrastructure.
"Merkos Shlichus is about enriching communities," says Rabbi Moshe Kotlarsky, Vice Chairman of Merkos, Chabad-Lubavitch’s education division. “The rabbinical students spend time in communities that typically have limited or no access to the larger Jewish community.”
Through action on the grassroots level, teaching classes and meeting with locals, they lay the groundwork for  building a Jewish community. Very often members of a particular community will be called upon by the locals for greater involvement, be it a request for a full-time rabbi, a Jewish camp or High Holiday services.
New to this year’s program, 12 groups of traveling rabbis will work under a special partnership with the Aleph Institute, reaching out to some 4,000 Jewish men and women incarcerated in the nation’s state and federal institutions, with support.
Shneur Nadjar coordinated the Merkos Shlichus program: “A lot of research goes into matching the  rabbis with a suitable destination. A town that may have a large population of Russian immigrants will get rabbis who have spent past summers in the Former Soviet Union. That way the program feeds into itself, experience gained in one region then cycles back into another."
Cartagena, Colombia, a Northern seaport nestled along the Caribbean may have under one hundred Jews in its population of over one million, but uring the late 15th and early 16th centuries, Cartagena was home to a diverse crowd of  Jewish merchants and settlers, amongst them Portuguese Conversos and Sephardic Jews from Amsterdam, Morocco, and the Ottoman Empire. When the Spanish Crown established an office of the Inquisition in 1610–a building that can still be seen today in the city's historic old town–Jewish activity ended, and by 1650 the last vestiges of the community went into hiding.

Today, there are new signs of Jewish growth. Rabbi Sholom Blooming, of Brooklyn New York, led a Passover Seder there this past April, for thousands of Israeli tourists who visit Cartagena. But during his visit, he says, "we made contact with the local Jewish community, and they expressed interest in our return this summer."

So, Blooming and his partner Rabbi Shmuel Loebenstein of Melbourne, Australia will be returning to Colombia, fresh from ending their stints helping the Chabad yeshivas in Buenos Aires, Argentina and Berlin, Germany respectively. They’ll come with open hearts and minds, a Torah Scroll to read from during services they will be holding, and much needed items such as Tefillin, Mezuzos.

The friendships forged by the rabbinical students in the course of a summer tour run deep, and it is their human element of care and non-judgmental Judaism that others relate to.

After spending time last summer with Rabbis Yossi Silverstein and Meir Perlstein, the elderly Mel Borenstein of Puerto Vallarta, Mexico announced: “I don't know how much time I have left on this world, but I wish to see a Jewish community established here!”
The rabbis returned this summer, and will do so again at Rosh Hashana, to help with High Holiday services.