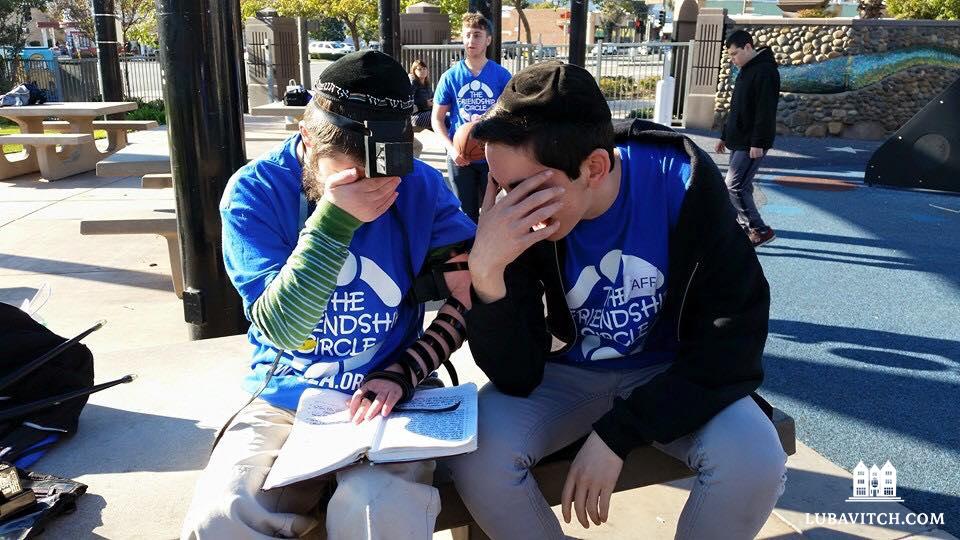 All News
By Masha Shollar

Any boy’s bar mitzvah brings changes in the transition from child to man. But those turning thirteen over the past year have had to contend with more change than expected. COVID has led to many boys having scaled down celebrations — or none at all.

Rabbi Mendel Groner is the director of Friendship Circle International, an organization focused on supporting and celebrating children and young adults with special needs. Early in the pandemic, Groner started hearing from chapter directors that many of their participants were canceling their celebrations.

Because “there’s no way for them to mark this milestone, a lot of the parents said, ‘Forget about it, it’s not going to happen.’”

So Groner decided Friendship Circle’s next initiative should be to send tefillin to some of these bar mitzvah boys — one for each chapter organization, eighty-one pairs in all. Tefillin, or phylacteries, are black leather boxes containing parchments with Hebrew writing, which men over the age of thirteen strap to their head and non-dominant arm while praying. The cost of a pair typically starts at around $300, and can cost as much as $1,000, depending on the quality. Each kit also includes a yarmulke, tzedakah box, and prayer book.

As demands for the kits grew, Friendship Circle began to hear from chapter directors that “they had bat mitzvah girls they knew would appreciate this as well.” They’ve started putting together similar boxes, containing candle sticks and prayer books. Though they haven’t yet begun to discuss the details of maintaining these bar/bat mitzvah boxes, Groner said that “we definitely want it to be something that continues” after the pandemic ends.

Rabbi Elazar Bogomilsky, who runs Seattle’s Friendship Circle with his wife, Esther, had been mulling over the problem of delayed or canceled bar mitzvah celebrations for a while. One of their participants, Yonatan Shectman, was shortly to turn thirteen and “we were trying to figure out how to plan a whole bar mitzvah around COVID,” while being mindful of the shifting protocols.

Yonatan’s mother, Irit, planned “to go to Israel because all of our family is there. But the pandemic started a few months before his bar mitzvah and of course, all of our plans fell through.” Instead, Yonatan’s bar mitzvah came and went, back in June, and although Irit hopes to eventually celebrate in Israel, she doesn’t know when that will be possible. “It will take a long time to get him back to his normal. Because he has severe autism, flights are already a big challenge. So we thought to postpone but until when and until what? It’s all so unknown.”

When Bogomilsky heard about the new initiative, he knew exactly who to send the tefillin to. “One day, Esther just called me and said, ‘Tefillin are on the way to you,’” Shectman says, “Honestly, I just burst into tears. It was a big surprise. A bar mitzvah is a big deal for us and we can’t wait to see him becoming an adult, officially.”

Lisa Waldbaum, mother of bar mitzvah boy Alex, of Solon, Ohio, said that when she received the sign up link from Yossi and Estie Marasov, who run her local Friendship Circle, she thought she was just ordering the tefillin through Friendship Circle. “I did not know at the time that they were helping the family and the child, that it was more involved. So that was a nice surprise — a really thoughtful program.” Alex is preparing for his bar mitzvah, which he’ll celebrate in September, along with his new tefillin.

One of the benefits of this program is that it will tackle what Groner calls the “innocent misconception” that he came across several times; “Do kids with special needs even need to put on tefillin?” The accompanying how-to guide explaining the steps in laying tefillin features bar mitzvah boys with special needs. This is a guide Groner says he hopes “shluchim will be able to give out to teens in general and it will include pictures of kids with special needs. The Friendship Circle participant is often looked at as a victim or someone we pity, but now, they’re going to be the example of how to celebrate a bar mitzvah during COVID. They’re going to be the ones inspiring their friends, their parents.”

The first recipients are set to receive their tefillin in the coming weeks. Schectman, who is planning a small celebration, said it will be a proud and emotional day. “We are so deep inside of our routines and challenges of just surviving the pandemic, and you don’t see the light at the end of the tunnel. And this is something to look forward to, something kind of normal. That’s our little light.”