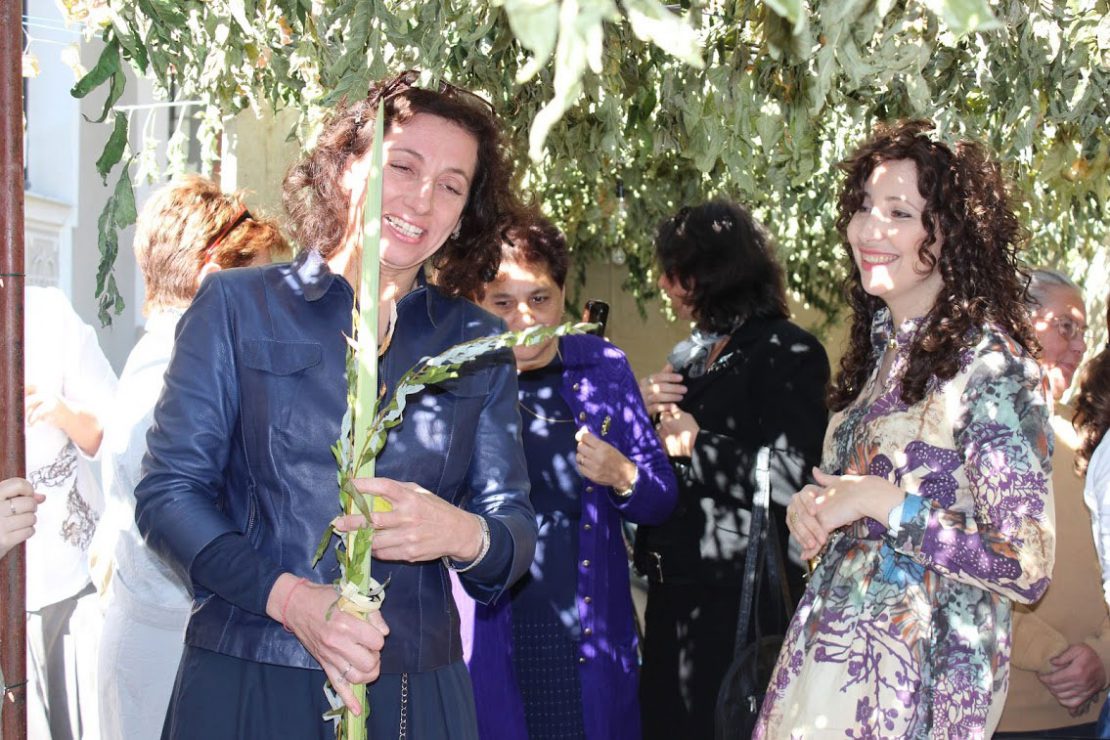 In the summer of 2014, Chana Gopin, a Chabad-Lubavitch emissary in Lugansk, Ukraine sat down to write the 150th editor’s letter of The World of the Jewish Woman, a monthly Russian-language magazine she founded 15 years earlier.

“I’ve had a lot of dreams,” she wrote, “I’ve dreamed about how my family would look, and how I’d develop the community in which I’ll find myself as a Chabad-Lubavitch emissary. But what’s happening now wasn’t in the dreams.”

At the time, she now recalls, she was writing the column to “the backdrop of sirens, gunshots, fighter jets, and the smell of death in the air.” An emissary to the historically peaceful eastern Ukrainian city since 1999, Gopin never dreamed that Lugansk would one day be in the headlines.

“I was used to people asking me to repeat the name of the city two or three times, sometimes just settling on, ‘Ukraine.’ And suddenly, morning, noon and night, my family and others were calling to ask what’s happening in Lugansk.”

She ended her first-person narrative with hope that “the next issue will be written in a different atmosphere.

Little did she know how prophetic those words would be.

Two years have passed since the devastating conflict that erupted between pro-Russian separatists and Ukraine’s central government dominated the headlines. As the fighting dragged on, the world forgot about the self-proclaimed “Lugansk People’s Republic,” which has since taken control of the city. But with the world watching or not, the so-called War in Donbass has irrevocably changed this once quiet eastern region of Ukraine, claiming 1,200 civilians and rebel lives, reducing a population of about 600,000 to half that number, and creating tens of thousands of refugees, several thousand among them, Jews.

Anya Nekhainko, who served as the central Lugansk synagogue’s secretary for nine years, recalls the terror of the constant bombing and shooting. “We had no water or supplies, no electricity, no phones or any connection to the outside world.”

Speaking by phone from Lugansk, Nekhainko remembers “crouching in my house one night as the bombs fell around me. In one hand I clutched an envelope with all my documents in case I needed to flee, and in the other hand I held my Tehillim (Book of Psalms), praying to see another day.” Though the situation was “terrible,” Nekhainko remained in the city under siege with her bedridden and disabled mother.

The vast majority of young professionals, families with young children, and people with means escaped the carnage. “Everyone who saw a way to rebuild their lives elsewhere left,” says Gopin. She and her husband, Rabbi Sholom, and their seven children held out as long as possible, escaping the city under heavy shelling just a few short months after her hopeful letter, when the situation became dangerous.

“We had not planned to leave, but one morning a bomb destroyed an administration building right in the center of the city, just a few streets away from our synagogue,” Gopin recalls. Within hours, the couple placed their children on a train to Kiev, joining them shortly afterwards. Leaving behind their house, car, and nearly all of their possessions, they temporarily relocated to Israel, where they have since moved between ten different apartments. Emissaries in exile, the Gopins now divide their time between Kfar Chabad, the Israeli town where Rabbi Gopin grew up, and Kiev, Ukraine’s capital city, where they frequently visit and help fellow refugees from Lugansk.

While arranging for the relocation of his own and many other Jewish families, Rabbi Gopin tapped into Chabad’s network of support, funded by the Ohr Avner Foundation, which helps resettle displaced Jewish community members throughout Ukraine and Israel.

One such person is 63-year-old Lena Yerelchenko, who fled Lugansk with her husband, Sergey, “amid explosions” during some of the worst of the fighting. With Gopin’s help, the elderly couple made their way to a Chabad-run transit center in Zhitomir before transferring to an Internally Displaced Person (IDP) camp. After “literally living in a camp in the forest” for a year, the Yerelchenkos finally settled on the outskirts of Kiev, along with other Lugansk natives displaced by the war. As they began building a new community from scratch, Lena was put in charge of running the camp’s kitchen and arranging for kosher food, while her husband helped construct the compound, which included a new school and synagogue.

Yerelchenko, who has children in Israel, says that though she can easily make aliyah, she will stay as long as the community needs her. “Yes, we left behind our home and belongings, but here we are making a new community, making sure we keep in touch and never lose that sense of responsibility toward each other.”

The desire to stay connected to the once vibrant community is strong. The Gopins regularly organize community gatherings and reunions in Israel for the dozens of refugees who chose to start their lives over by immigrating to Israel. “When it is possible, we get together physically. Otherwise we rely on telephone calls to sustain that connection and provide our community members with the support they need,” says Chana.

Today in Lugansk an eerie sense of calm prevails. Following the signing of the second Minsk Protocol on February 15, 2015, the intense fighting ceased. And although the Kiev forces and those of the self-proclaimed republic continue to violate the “silence regime” with nearly daily shelling on the outskirts of the city, there are few casualties.

A relative semblance of order has been reestablished in the shelled-out city, though Nekhainko describes empty, quiet streets, shuttered stores, and an early curfew that keeps inhabitants indoors after dusk. With a military presence but few functioning government agencies, low-level lawlessness abounds as squatters take over empty houses and robberies become commonplace.

“The city doesn’t really belong to anyone,” Gopin asserts. “There are no banks or proper hospitals, and no one feels a responsibility towards the citizens.” Residents look to “how many lights are on in the windows” as a measure of who is still around.

Still, as shelling and gunfire have ceased and security has somewhat stabilized, some of the displaced have started to trickle back into the city. Most of the refugees who have returned home live in the poorer rural suburbs of the city and have little opportunity to make it elsewhere. But with the Ukrainian government in Kiev imposing a virtual blockade on the separatist region, those with higher incomes or young children are not looking back.

Yerelchenko says that getting in and out of the city is a “nightmare” with miles of red tape, checkpoints, and permission to enter often dependant on any given guard’s mood swing. “People who must, go. Others avoid it at all costs.”

Gopin confirms that 70% of the Jewish community has permanently relocated, an overwhelming majority of them young families with children. The Jewish demographic today skews older, with some new, previously unaffiliated faces joining the diminished community for support during these trying times.

The Lugansk synagogue, which sports some broken walls, windows, and fences from the fighting, now hosts services only three times a week instead of daily. The Gopins continue to lead holiday programs long distance, and conduct Torah classes via community members who have stayed. Other programs have stopped temporarily as the focus of activity turns to providing humanitarian aid to the impoverished. With the unwavering assistance of Rabbi Yechiel Eckstein and his organization Keren Hayedidut, Chabad has established soup kitchens and runs a meal distribution system which feeds nearly200 people every day. Though it is “difficult” that Friday night services are no longer an option due to the curfew, Nekhainko says locals are glad for whatever opportunities are still available to connect and be inspired.

Rabbi Gopin has managed to return to Lugansk a few times for short visits, and in September the entire Gopin family temporarily returned for the first time in over a year and a half to celebrate the High Holidays with their much-missed community.

“We are very connected to Lugansk and my children miss their home terribly,” says Gopin. Those short few days back in their own home were very emotional as the children wandered the house, reveling in the familiarity of their own beds, linens, and treasured toys.

The unsettling reality of no longer having the stability of her own roof over her head has rattled Gopin. “There was so much potential when we came here,” she says wistfully, describing the investment, “heart and soul” into building a strong Jewish infrastructure with a school, synagogue, orphanage, and a full schedule of programs and activities that now operate at a fraction of their previous rate, if at all. “I still sometimes think that one day I am going to wake up from a bad dream.”

Although Jewish Lugansk now seems bare, the seeds the Chabad emissaries have planted continue to bear fruit, albeit in different places. Mikhail Rabinovitch, a 50-year-old engineer who moved his family to Ashdod, Israel when things in Lugansk started going south, says that it was thanks to the strength and authenticity of the Jewish community of Lugansk, that their transition to Israel has been so smooth.

Before they fled the war, Rabinovitch’s son, seven, and daughter, sixteen, attended the Beit Menachem School, which Chabad opened in 2006 and had more than 130 students before the conflict forced its shut-down. “The school was amazing,” says Rabinovitch. “My children got a solid Jewish education and were very connected to their Judaism. Thanks to that background, when we arrived in Israel, they integrated into Jewish life here seamlessly. They knew enough Hebrew to communicated, and, with their knowledge of the holidays and Jewish culture, they immediately felt a part of things.”

Another project that continues to blossom, even out of Lugansk, is the popular monthly magazine for Jewish women that Gopin founded and still edits, along with the Russian-language website for women, Jewishwoman.ru. The magazine and website are read by thousands of women in Ukraine, Russia, the Baltic States, and in Russian-speaking communities around the globe. Even as conflict flared around her, Gopin hasn’t missed a single issue in the 15 years since the magazine was created.

“It is very much a labor of love,” says Gopin, who takes no salary for her work at the magazine, which she continues to publish, even after funding dried up, and she was unable to properly communicate with her team of writers. Her dedication is appreciated by her readers, who feel the need to share their stories and struggles and read words of inspiration now more than ever. Nekhainko, who has been unable to get her hands on a recent copy of the magazine due to the blockade, regularly peruses the website, which she says makes her feel connected to her scattered community.

Chana Gopin concedes that in all likelihood, Lugansk’s Jewish community will never return to its pre-war vibrancy, but “whether they are there by choice or not, there will always be Jews in Lugansk.” And as long as there are Jews there, the Chabad emissaries remain committed to serving them. The questions of when and if the family will ever physically return to the home and community that they love remains to be seen, but the Gopins are not giving up. “I hope that the last words of our story have not yet been written.”