Lost in The Andes, Found by Chabad 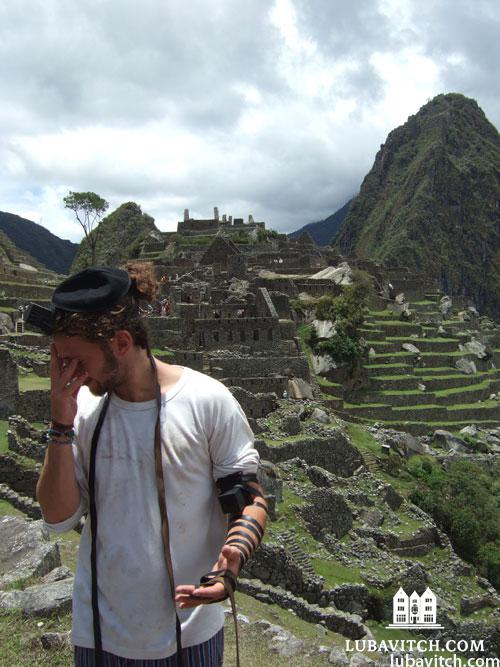 The writer, a Chabad rabbinical student, spent recent months in Cusco, where he encountered numerous Israelis looking for an escape.

(lubavitch.com) Roey Sadan, a 26-year-old old Israeli, was looking for adventure after he had finished his mandatory three years in the Israeli Army. Looking to explore the world, he took a job to pay for his travel expenses. When he had saved enough, he bought a bike, naming it emunah, the Hebrew word for faith, and spent the next six months preparing himself physically to bike around the world.

His journey began in August 2007 in Alaska, and would bring him joy and difficulty. More daunting than the storms, the treacherous mountains or having his possessions stolen in Mexico, he says, was the solitude of of months in the Andes mountain range.

Roey is not alone in his wanderlust; it has become a virtual right of passage among Israelis to travel abroad after leaving the IDF, and flock to exotic locations in India, South-East Asia, as well as Central and South America. Many go there hoping to get "lost." Far from home and family, often beyond cell-phone reception, solitary traveling in the mountain ranges is conducive to shaking off ties that bind.

But before Rosh Hashana, Roey began to look for a place to rest, both physically and spiritually, from life on the road. After more then than a year of travel, the sound of Hebrew in the streets of Cusco, Peru, was music to his ears.

According to the Israeli Ministry of Foreign Affairs, nearly 40,000 Israeli citizens travel to South America each year, where Chabad centers in Argentina, Bolivia, Brazil, Ecuador, and other locations have all become regular stops on the itinerary of the Israeli traveler. Cusco, situated more than 10,000 feet above sea level in the arid mountains of the Andes, with its graceful mix of colonial Spanish and Incan architecture offering a vibrant community and a chance for adventure — whitewater rafting down the nearby Urubamba river, exploring the ancient ruins of Machu Picchu, and trekking through the Inca jungle, is a particular point of interest.

Dressed in local alpaca garments and tanned by the sun in a city reported as having the highest ultra violet levels in the world, the backpackers that come find themselves warmed by an entirely different light all. Perhaps fueled by a desire to re-examine their own roots after experiencing a foreign culture, a stop in at Chabad has become an important aspect of the trip abroad.

According to Rabbi Ofer Kripor, who, along with his wife Yael, came three years ago to serve the needs of the Jewish travelers in the area (in Cusco), there has been a steady growth in the numbers attending Chabad services. About 40 guests join the Kripors on a typical Shabbat, and holidays the numbers soar into the hundreds (400 this past Rosh Hashana), even 1000, as was the case at the Passover seder last April.

The demand has been so great, that the Kripors have already been forced to find a larger location to house their activities. More than just a synagogue, this new center allows for all of the Jewish traveler's needs, from the sublime to the mundane. Just a few blocks from the center of town, this new location houses a kosher restaurant and an internet cafe, where backpackers can grab a taste of home with a shawarma, catch up with the world, relax, learn, network with other backpackers, and even find a caring ear provided by the rabbi and his wife.

When tragedy struck this past July and an Israeli traveler drowned during a rafting trip after falling in the water and being pulled under by the  current, Chabad was involved with the recovery of the body after an extensive search that ended shortly before Rosh Hashanah.

Chabad ensured that the body would be treated with respect, as mandated by Jewish law. When the coroner requested an autopsy, the rabbi intervened, so that the body could be buried intact in Israel.

Dedicated to helping all those who follow the song of the wandering Jew, Kripor notes that he, too, has benefited from the love and attention of Chabad emissaries — he was once one of the many Israelis who traveled the world, stopping, as fate would have it, in Cusco as well.

"My goal," he says, "is to give back in part what was given to me and in that way help carry on the Rebbe's vision that every Jew, no matter where he or she may be, has a home."