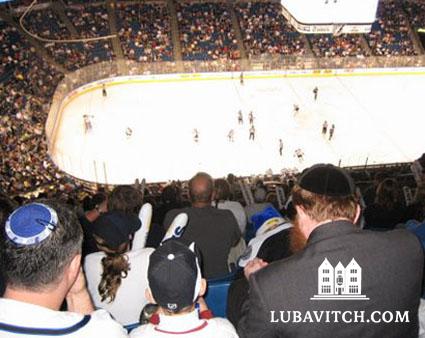 (lubavitch.com) Some 500 Jewish fans noshed on Glatt kosher hot dogs Thursday as Tampa Bay Lightning and the Colorado Avalanche played an intensely tight game. The Lightning team celebrated the return of their center, Jeff Halpern, who hasn’t played since reconstructive knee surgery in June. His debut, a couple of months into the season, was particularly apropos: Halpern is one of a handful of Jewish players in the NHL.

Eight Chabad centers in the Tampa Bay area sponsored the Jewish Heritage Night at the St. Pete’s Times Forum. Sporting commemorative “Light up Chanukah with the Lightning” t-shirts, fans partied at the pre-Chanukah bash and menorah lighting. Before the game began, three children from the Jewish community were honored to announce the game’s start with a call of “let’s play hockey!” Chanukah music, Jewish-themed video clips, and the participating Chabad’s names played on the Jumbotron throughout the evening.

“There can be no better way to celebrate the festival of lights, than with the entire community coming out in a display of Jewish pride to watch the Lightning,” declared Rabbi Yossie Dubrowski, director of Chabad of Tampa Bay.

“The fact that Halpern made his season debut on Jewish Heritage Night and scored the Lightning’s only goal is real divine providence. I have no doubt that it was due to the energy of the 500 Jewish fans that were cheering him from the stands,” said Rabbi Levi Hodakov, program director at Chabad of Pinellas County.

The ice was cold and the game hard, but for the greater Jewish community it was a warm night around the rink.