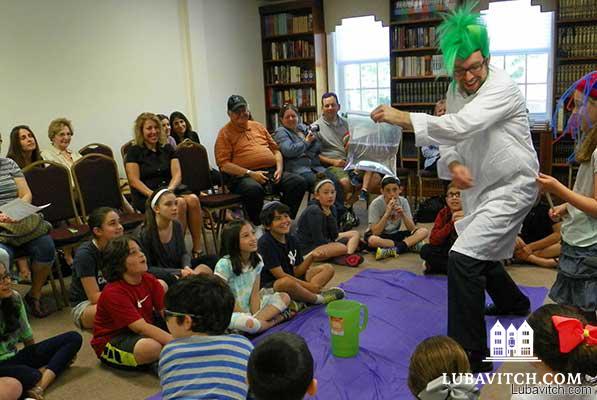 As electric leaf blowers blow rolls of toilet paper, a delighted crowd of young children listen to Dr. Schnitzel derive life lessons from Newton’s laws of motion, Jewish ideas, morals and observance. It is the ever popular world of mad science with a Jewish twist.

Rabbi Michoel Goldin, youth director of Chabad of Teaneck, New Jersey has been working with kids since he was a teenager. Dressed in a doctor’s coat and a green wig, Goldin says his passion for entertaining children has pushed his creativity “out of the box.”

As a counselor he’d reward his campers by performing juggling stunts or magic shows. He later joined up with a friend from his yeshiva days in Budapest where, known as the “Budapest Jugglers,” they ran programs for the children of the local Jewish community.

As director of Chabad of Brooklyn Heights’s Camp Gan Israel, he conducted weekly science experiments with the kids, employing them in his Judaic lessons. “The kids loved that more than anything else,” he says.

Goldin’s wacky sense of scientific adventure has captured the imagination of children and teens alike. To make a point about the human-G-d relationship, he demonstrates with five varieties of slime, each with its own texture: one bounces, one is very slimy, yet another is transparent. He shows the kids how slime is made and how its textures can be manipulated by adding one ingredient. “This slime is not so clear,” he says holding up a dark slime, promising the kids some at the end of the session. “You can make a big wall out of it and no one will know what you do behind it.”

Just as they think they got it, the wacky scientist disrupts their satisfaction: “The truth is,” he tells them, “you can never hind behind anything. G-d sees everything you do. It’s as transparent as the clear slime.

“So let’s say you have a big bottle milk that you are carrying and it falls on the floor, or there is ketchup on the baby’s head. When mommy asks you who did it, what do you say?” he says in a singsong as the kids burst out in laughter.

Hiding behind the dark slime, he assures them, his face turning serious, will only make the situation sticker, like the very sticky slime. His lesson to this group of four year olds is clear as the transparent slime he’s showing them.

“When someone asks us a question, we always need to be very clear and always say the truth.”

Goldin, who now travels to do shows in the New York tri-state area, says that once he has the children’s attention, he finds that they are very receptive to his Jewish messages. “It’s important to do activities that the kids like, but there has to be a Jewish message and that is what I try to give the kids.”

Goldin searched Jewish texts and stories to come up with 70 ideas of how to connect mad science projects with Jewish ideas.

Aviva Edelstein is a mother of two children in Chabad of Teaneck’s summer camp. Her children, she says, loves Goldin. “The day that Dr. Schnitzel comes, that is their favorite day of the week.” One day last week he brought an expanding bridge. After explaining to the three year olds why we need bridges, he called up one of the children to assist him in erecting his model bridge.

“You get to wear Dr. Shnitzel’s pajamas,” he tells the excited child. Everyone in the room cheers him on. As he slowly expands the bridge from one chair to the other, he asks the kids what holds the bridge from falling down.

“The streets and the sidewalk,” one child calls out.

“The street and the sidewalks are very important, but there are important pillars that hold the bridge.”

He then tells the children that there are three important pillars that the world stands upon.

“Do you know what they are?” he involves the children.

Torah, prayers and doing good deeds, he explains, “are the pillars of the world.” 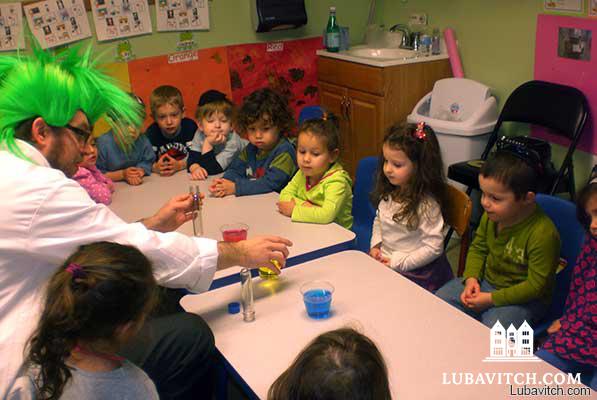 He shows them photos of bridges around the world and tells them to look out for bridges while they are driving around with their parents, and the next time he meets them they should tell him where they are.

“I think that a ‘scientist’ coming in and doing this, that in itself would be wonderful,” says Edelstein. “But the fact that he is also a rabbi, leading a life of Torah, and always teaching these dynamic science lessons, shows that there is a place for Torah in everything. Seeing him embody both worlds, my children could see how wonderful G-d’s world is while leading a good Jewish life.”

Related Articles
View All
Children Travel Through Jewish Time
Since opening some 50,000 people a year have been greeted by Abraham as he offers a gateway into the 7,000 square-foot tour of Jewish culture…
Children Learn Through Art and Community Service At A Toronto Chabad School
A new Chabad center in an unlikely Toronto neighborhood is getting noticed for its unique Hebrew arts school. Chabad of York Mills quietly opened before…
Jewish Kids in Action (JKA) Brings Tradition Alive to Children in Uruguay
When the lights at the Kehila Theatre dim Wednesday morning, it will be show time for some 500 Jewish school children..
Striving for Excellence at Chabad Preschool
Josh is on the waiting list to get into Chabad of S. Mateo’s brand new Chai Jewish Preschool of Excellence, but he doesn’t know it.…
Fun and Laughter in a Land of Chaos
Forty yellow school buses make the rounds through Buenos Aires and the surrounding suburbs morning and afternoon, ferrying over 900 children back and forth daily.…
The Mitzvah Factory:Taking Fun Seriously
“Will your grandchildren be Jewish?” Rabbi Shraga Sherman of Chabad of the Mainline in suburban Philadelphia believes he has an answer to that question, so…
Jewish Public School Children Thrive at Florida Afterschool Program
Rabbi Moishe Kievman, Chabad representative in Highland Lakes, who co-directs the program together with his wife, Layah, says the school has grown by word-of-mouth. Children…
In New Hampshire, Kids, Parents Prepare for Passover With Chabad
An article in Tuesday's Nashua Telegraph, Rabbi's Bakery Blends Families, Bread, by Dean Shalhoup, featured a lively profile of New Hampshire’s Rabbi Levi Krinsky in…
Features
Coming Back From Cancellation
The notorious practice of “cancellation” suggests that our society has forgotten how to forgive, and how to make amends. What is the Jewish perspective? Here…
Features
Remembering Rebbetzin Chana: Jewish Feminine Role Model
A feminine role model of Jewish activism and proponent of Jewish scholarship, is being remembered today, on her yahrzeit.
Features
Grateful or Entitled?
I am concerned about what kind of people are we raising, and I want to reverse this shift in our family that is making our…
Features
Howard Glowinsky: Letter To My Children
Individuals who have come to Torah study as adults reflect upon something that they have learned
Get Inspiration to your inbox!
Newsletter
Join our weekly newsletter for inspiration and updates
Donate
Find Your Local Chabad Center
Subscribe
|
Log In
Chabad
About Chabad-Lubavitch
About Chabad Lubavitch
The Rebbe
Headquarters
Magazine
Magazine
News
News & Updates
In The Media
Impact
Social and Humanitarian
Social and Humanitarian
Education
Education
Community
Community