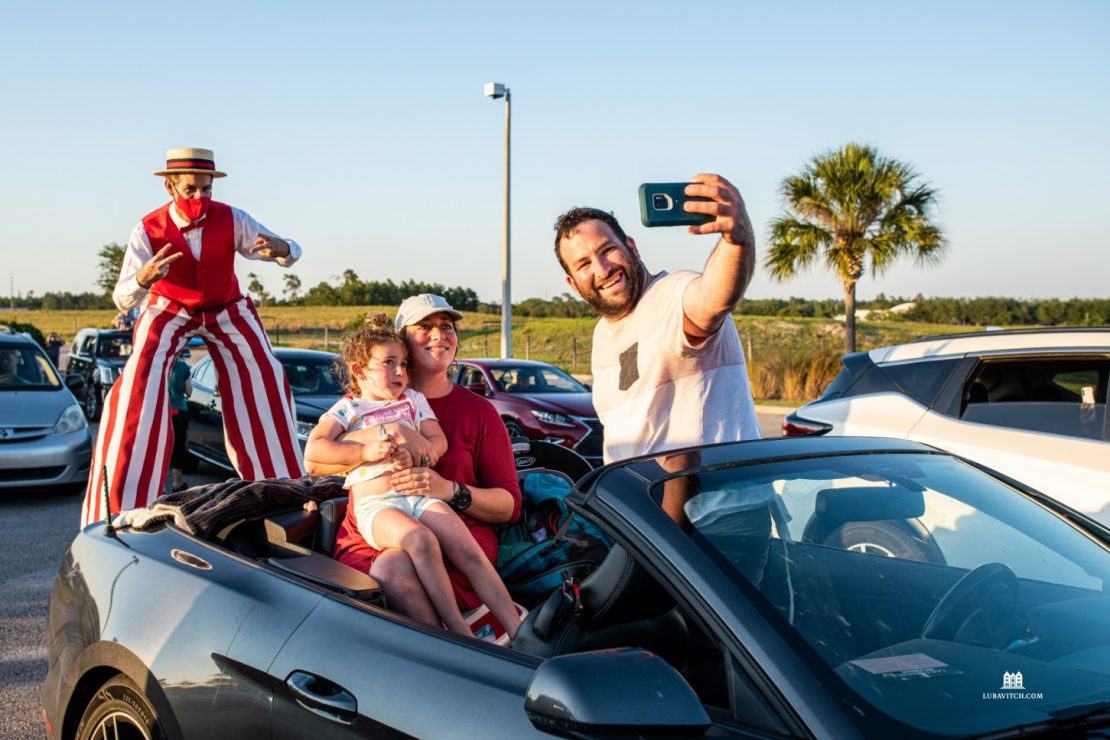 On Monday evening at 18:00 sharp, 45,000 individuals tuned into the livestream at 18for18.com.au. Narrated and presented by children and individuals from Jewish communities across Australia and New Zealand, the event sought to bring together 18,000 Jewish Australians for 18 minutes of Jewish unity just as (on the 18th day of Iyar) the holiday of Lag B’Omer began.

A minor Jewish holiday, Lag B’Omer is traditionally celebrated with major fanfare. Parades, picnics, bonfires, music and displays of Jewish pride mark the occasion that falls 25 days after the end of Pesach, on the 33rd day of the Omer count. It commemorates the miraculous ending of an epidemic that killed 24,000 students of Rabbi Akiva in the second century. It is also the anniversary of the passing of one of Rabbi Akiva’s foremost students, Rabbi Shimon Bar Yochai, also known as the Rashbi, the author of the Zohar, the foundational text of Jewish mysticism (kabbalah). The epidemic is attributed to a lack of respect among the scholars of the day, and so themes of unity and healing are central to its celebration.

This year, as a modern-day pandemic forces social distancing, thousands of Chabad communities around the world found creative ways to celebrate together. Whether online, or drive-by, the themes of Jewish unity had particular resonance for the more than a hundred thousand participants.

At the 18 for 18 event, Jewish Member of Parliament and Australia’s treasurer, the Honorary Josh Frydenburg, Israeli ambassador, Mark Sofer and Sir Frank Lowy, a Holocaust survivor and former chairman of Westfield Corporation and Football Federation Australia, offered greetings. “The lock-up has been very trying and has brought back memories of when my father was taken away when I was just Bar Mitzvah,” Sir Frank said. “These memories can be painful especially as I sat at my Seder alone, but I do feel connected to all of the Jews in Australia and New Zealand.”

Lainie Cadry, a registered nurse from Sydney and Rachel Shentzer of Victoria Police lead a prayer for healing and Natan Sharansky, the renowned former USSR refusenik shared words of inspiration. “Our strength is that we are never alone, we are always connected,” he said.

The non-denominational  broadcast was interspersed with musical interludes from Jewish Australian musicians and concluded with blessings from the Chief Rabbis of the Commonwealth, South Africa, Israel and Russia. It was followed with the announcement of an ambitious project to gather 180,000 good deeds from participants over the coming weeks.

Across the globe at a drive-in movie theatre in Deltona, Florida, the 150- car lot was filled to capacity. Online bookings had sold out days earlier.

“This is my first ever drive-in concert! Show me your lights,” singer Gad Elbaz enthused to the crowd as he jumped out of his blue convertible and hopped onto stage.

As Gad sang from the stage, families watched on the big screen, the music streaming from their car radios. The audience honked their horns in applause and flashed their headlights to the rhythm.

Organizers took precautions to keep physical interactions to a minimum. At entry, every car received a booklet with instructions asking them to remain inside their cars, a concession menu and program guide. The J Grill of Ormond Beach set up a barbecue 100 feet out of the parking lot and orders were delivered to the cars. The rabbis of the participating communities prerecorded a collaborative video explaining the message of Lag B’Omer and leading a prayer for the health of all those still recovering from COVID-19. From a video montage, children from each of the participating communities lead the crowd in reciting various Torah verses.

In lieu of a bonfire, a fire eater performed for the crowd. During intermissions jugglers, stilt-walkers and balloon artists walked up and down the aisles of cars.

People drove over an hour to participate and many others watched the livestream from home. “It’s nice to do it on zoom, but we’re people, we want to see each other for real. This is the closest we can get to getting together as a community while looking out for everyone’s safety,” said Rabbi Majesky.

As Tuesday dawned, communities large and small from Cincinnati, Ohio, to Sarcelles in France held car parades. In a display of Jewish pride, scores joined the parade in brightly decorated cars driving through neighborhoods to the delight of children viewing the procession.

Some, like Chabad-Lubavitch of Northern Virginia also used the parade as a way to show gratitude to the front liners in the fight against coronavirus. A parade of forty cars headed to the  Inova Fairfax Medical Complex flanked by fire trucks, ambulances, police cars and an entertainment bus. At the hospital, the community presented food packages imported from Kosher Mart in Maryland to medical staff and made presentations for the police and fire departments.

“We took inspiration from the Lag B’Omer parades the Rebbe would hold in front of 770 and used it as an opportunity to show our gratitude,” said Hindy Deitsch, program director at Chabad.

“This is the most I’ve been out in a long time and the most fun I’ve had in a longer time,” said Shana Simon, a mom and grandma who works for the local government. “It was a really, really beautiful show of community and holiday spirit. Thank you so much for organizing a way to bring joy to the health care workers,” Christina Ettedgui, a mom and healthcare worker wrote on Facebook.

Others kept their celebrations virtual. In S Monica, California, community members picked up picnic food from Chabad and joined each other for a zoom picnic. In a small town in Upstate New York, Rabbi Mordechai and Chana Rubin of Colonie Chabad Jewish Center, similarly offered barbecue dinners for pick-up, prepared in accordance with Department of Health guidelines. Later in the day, the community joined a virtual kumzitz with cellist Sholom Eagle of Toronto, Canada.

There are many seniors in their community so the last two months has seen the Rubins up their game as they reach out to a vulnerable population sequestered in their homes. “While isolated, people are more in touch with each other and making more of an effort to connect so we wanted to celebrate that unity on Lag B’Omer,” Mordechai shared with Lubavitch.com.

Dubbed the World’s Biggest Virtual Lag B’Omer Parade, hosted by CKids, the Chabad kids network, saw tens of thousands of children from twelve countries who joined for an hour of live inspiration and entertainment. Eight hundred children from 120 communities submitted five-second clips of themselves marching with signs displaying their pride in being Jewish, or their favorite mitzvah. A ventriloquist, wacky science show and concert with Eli Marcus entertained. Special greetings from US Ambassador to Israel, Mr. David Friedman, left the children from South Africa, Australia, England, Sweden, Denmark, Thailand, Canada, Portugal, France, Ireland, Israel and the USA feeling the transcendent power of Jewish unity.

Related Articles
View All
Holiday & Shabbos
It’s A Lemon. It’s An Orange. It’s An Esrog!
It may bear resemblance to its cousins, but the esrog is no simple citrus.
Holiday & Shabbos
Sweet and Sweeter
Rosh Hashanah, Yom Kippur, Sukkot, Simchat Torah . . . the holidays in the Hebrew month of Tishrei are chock-full of traditions uniquely symbolic of…
Holiday & Shabbos
Remembering Sinai, Reliving the Experience
A survey by Kelton Research found that less than six in ten Americans knew the sixth commandment, “Thou shalt not kill”
Holiday & Shabbos
Rabbi Dovid Olidort: Behind The Iron Curtain
These are the personal Shabbos stories of an eclectic group of influential personalities
Get Inspiration to your inbox!
Newsletter
Join our weekly newsletter for inspiration and updates
Donate
Find Your Local Chabad Center
Subscribe
|
Log In
Chabad
About Chabad-Lubavitch
About Chabad Lubavitch
The Rebbe
Headquarters
Magazine
Magazine
News
News & Updates
In The Media
Impact
Social and Humanitarian
Social and Humanitarian
Education
Education
Community
Community