Keeping That Daily Appointment with G-d

Two books give insight into the act of prayer 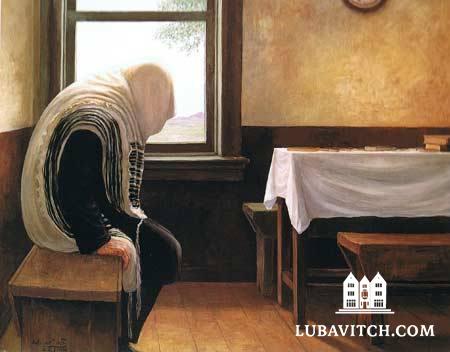 A Practical Guide to Davening: ideas and guidance on how to Daven based on the teaching of Chassidus.

Sea Traveler: a practical step-by-step guide to prayer and Chassidic meditation in poetry and prose.

A couple of years ago, I was asked to prepare a lecture in memory of the mother of a dear friend. As I sought an appropriate theme, I asked my friend what Jewish practices her mother, a Holocaust survivor, had found particularly meaningful.

“My mother didn’t daven formally every day,” she said. “But you know, she used to talk to G-d all the time in her own language.”

Thinking back to my youth, I can remember many other men and women who “talked to G-d”—who felt Him as a real presence in their life. During Rosh Hashanah and Yom Kippur, there was a palpable intensity, a deep beseeching, with total lack of self-consciousness.

While this is something that seems to come with much greater difficulty to our generation, there is reason to believe that the difference is only one of degree; davening has never been easy.

In the words of a hauntingly wistful Chasidic melody:

One of the major innovations of the Chasidic movement was the recognition that despite the deep value and personal intellectual edification that came about through the diligent study of Torah, there was a more elemental connection to G-d that could only be achieved through prayer. Rabbi Shneur of Zalman of Liadi was once asked why he traveled to Mezherich to become a student of the Chasidic leader, the Maggid of Mezherich (Rabbi DovBer), rather than going to Vilna, a city of many noted scholars and the first choice of most students. “In Vilna,” he replied, “one learns how to study. But in Mezherich, one learns how to daven.”

Prayer is an appointment with G-d—and all of us are called three times a day to engage in this most vital conversation with our Creator. And yet often, we find it difficult to find the appropriate focus—our recitation of the words mechanical, distracted.

What makes davening so hard? For those that are new to davening, there are technical barriers: the words are unfamiliar, hard to understand, perhaps even hard to pronounce. For those who have been davening for many years: the text may have been mastered through rote repetition, but this fluency often gets in the way of concentrating, making it easy to daven on “automatic pilot” in the same way that we often travel to work without being really conscious of the steps we took to get there. As the Talmud writes, “One who prays and finds himself at [the blessing of] “Shomei’a Tefilah” [He who heeds our prayers] may assume he had proper intent… R’ Masniyah said: I am grateful to my head, for when I reach the prayer of Modim Anachnu, it bows on its own!” (Jerusalem Talmud, Brachot 2:4)

One who is serious about his or her spiritual standing, then, must grapple with the challenge of mastering davening. Yet many contemporary proposed solutions reflect a lack of appreciation for the task. Many can recall the pleasure of engaging in a prayer service with catchy (or soulful) tunes—but then one has simply replaced davening with a passion for music. Others enjoy reading deep commentary on the pages of the siddur—but this solution merely replaces “service of the heart” with “forays of the mind.” Some wax enthusiastic about the power of personal meditations, but engaging in this exercise in lieu of prayer is much like showing up to the wrong wedding. Sure, there is a great party going on, but it is not the one to which we were invited. We may succeed at getting in touch with ourselves, but the point of prayer is to connect to G-d.

So what’s left? How can we overcome the natural barriers to meaningful prayer and find a way to revitalize our “conversation with G-d?” For those who long to master the discipline of davening and are frustrated that prayer comes with difficulty—“es davent zich nit”—two recent books breathe new inspiration and guidance into the discipline of mastering davening.

A Practical Guide to Davening by Avraham Katz, is a slim volume, but eminently practical. Drawing on the advice and guidance of noted mentors (mashpi’im) of yeshivah students, who traditionally guide their students in the art of davening, Katz outlines a number of concrete steps that the reader can undertake in order to implement a focused program of improvement.

Understanding the meaning of the words

Reflecting on the state of one’s spiritual connection.

The essential obligation of prayer consists of turning to G-d to provide us with our needs. So the first stage to building more meaningful prayer is regularly and consciously thinking about G-d throughout the day: reciting blessings before eating, mentioning G-d when we have needs, and fears, as well as expressing gratitude for what is good in our lives. Thus, incorporating in our mundane conversation phrases such as “thank G-d,” “G-d willing,” “with G-d’s help,” (and uttering them mindfully rather than just by rote) are an effective way of making G-d a presence in our life (p. 19).

To be “in conversation with G-d” is to master the first stage of prayer.

Understanding and concentrating on the meaning of the words as one davens is a more complex step due to a number of practical difficulties. First, there is the simple language barrier. The language of davening is sometimes difficult to parse. Furthermore, the logical structure of the prayers is not always obvious. Finally, even once one has learned the meaning of the words, it is hard to remain focused on what one is saying on a daily basis.

Katz offers a number of practical suggestions for building understanding and concentration on the meaning of the words. He suggests setting priorities for focus, such as the Sh’ma and the first blessing of the Amidah, and gradually adding more prayers for study over time. Another strategy is to pick an area each day for special attention. 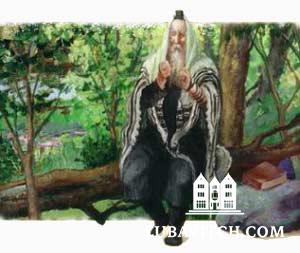 The writer similarly explores in very concrete terms how studying Chasidut can enrich davening, and how to practically incorporate a program into one’s davening routine, considering such details as how to select an appropriate study text, how much time to spend on it each day, and how to thoughtfully use what one has learned to inspire one’s prayer.

The style of this book is terse and direct, with a no-frills feel, almost like reading jotted personal notes. But it is also likely to be extremely helpful in assisting the reader with devising a practical program of change and sticking to it.

Sea Traveler, by Dov Ber Klein, likewise describes a journey of growth in prayer, albeit with a very different feel. Klein is creative and imaginative, and one gets the sense that prayer is something that he deeply relishes. In this book, he attempts to share his experience describing the dynamic of daily prayer through a series of short poems which he then explicates line by line.

When I first started reading, I found the poems somewhat childish and simplistic—the metaphor of sea travel somewhat forced, the meter off, the rhymes predictable, and cutesy interjections (like the words “rock your boat” printed in a wave pattern). My thought was that the book would be better without the poems.

But the more I read, the clearer it became that the poems were an integral part of the reading experience. Firstly, the chapters proceed by explicating the poems line by line, so that ultimately, the poems serve as a sort of shorthand for the book as a whole, making it easy to recall the structure.

But more importantly, what often holds us back from satisfactory prayer is that there is a part of ourselves that is too self-conscious, too busy “watching” ourselves to lose ourselves in the moment. To read Klein’s book about prayer is to observe someone who is able to lose himself in prayer with a total lack of self-awareness and an almost childlike joy and innocence. There is a sincere intensity and joy in these pages that is contagious, at first inspiring envy in the reader, and then, simply inspiring.

The book focuses extensively on how we are to prepare for prayer—outlined with the acronym SWEEPS: clearing the mind of Sadness, Worries, Excitement, choosing an Environment without distractions, as well as putting aside Planning and Sinful thoughts. The unpolished simplicity of this mnemonic for the process of preparing for prayer is more than compensated for by its memorability and ease of use.

Klein does not offer a detailed, line-by-line explication of the text of the prayer book. Rather, he introduces us to the dynamic of the larger themes of the daily Shacharit [morning prayers] and how each segment of prayer is a response to the previous one. A recurrent theme in the book is that of the dynamic of “approach and retreat”—or as he puts it, the spiraling switch of focus from our existence to our non-existence and back again:

“The role of this spiral is however much more than the resolving of the dilemma of where our spiritual priorities lie. Although indeed it does perform the function of preventing us from staying too high and removed from our involvement in the world and on the other hand it saves us from become too involved in the world and removed from spirituality, the process itself achieves a crucial end.

“This is because this to and fro, or rush and retreat as we called it earlier, is the very rhythm of energy and life itself. Is it not the expansion and contraction process in the pump of our heart that enables our blood to circulate? Is it not the rising and falling of our chest as we breathe that permits our lungs to send that vital oxygen around our body? Watch the rope as we shake its one end and its energy passes through itself in a rippling up and down pattern. Is this not like the movement of the waves of the sea as they roll forwards, with their crests and their troughs?” (p. 154)

This book, while deceptively simplistic, is never simple, and the reader that perseveres will be rewarded with a deepened appreciation of what it is like to lose oneself in prayer, as well as how to let go of the self-consciousness that so often gets in the way. Neither of these books are inspirational books in the classic sense of the genre. Do not expect to be transported by flowery turns of phrase or dramatic eloquence. What these books will do is give you the roadmap to find your own “Mezherich” so that you too can learn how to daven. 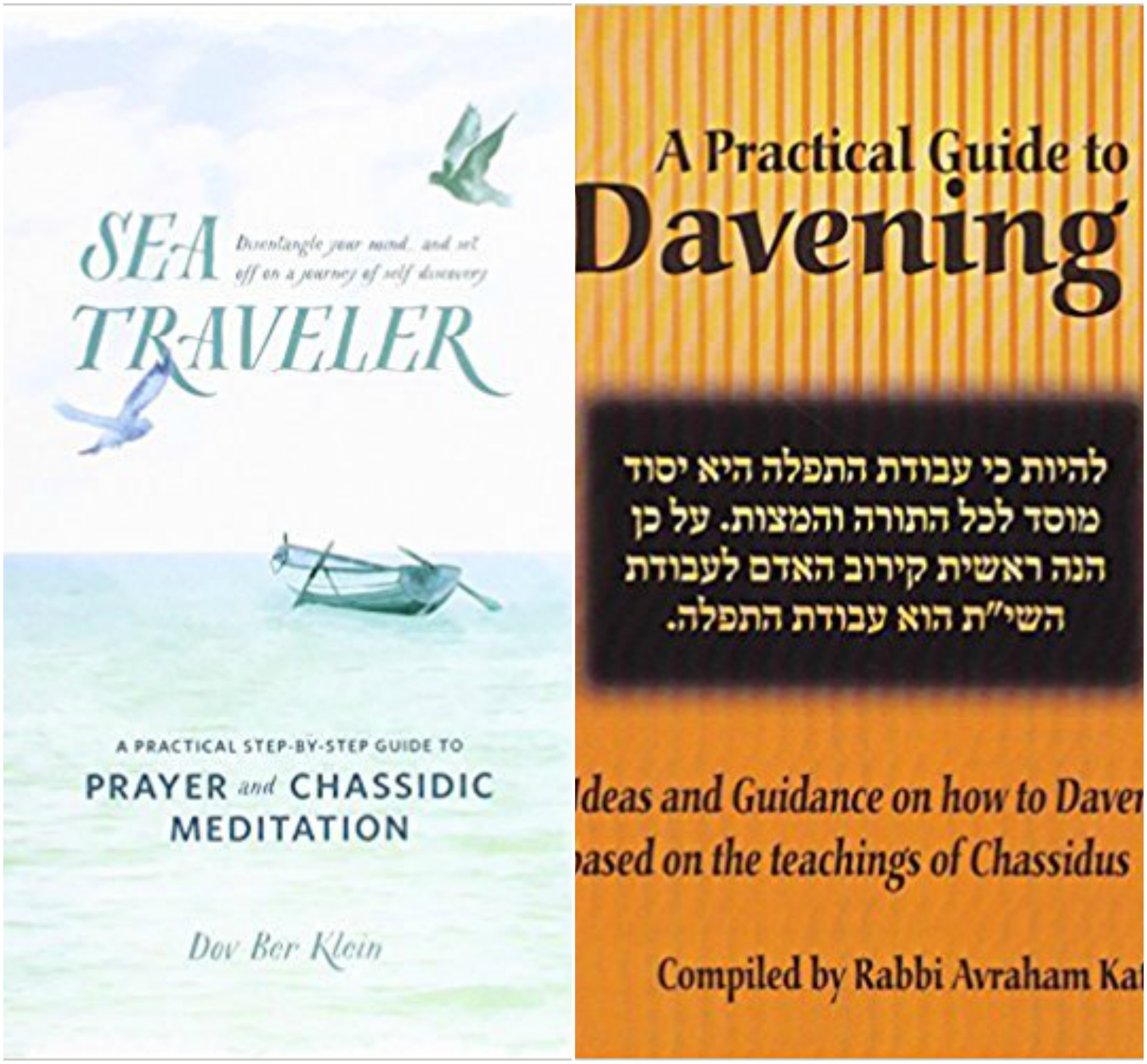 Related Articles
View All
Books
Book Notes
Scott Frank is a business executive. Yossi Lerman is a Chabad rabbi. Both have been on a quest to find more joy in life.
Books
The Haggadah Collection At The Library Of Agudas Chassidei Chabad
The prestigious Haggadah collection of Chabad’s Central Library began in December 1924, when the sixth Lubavitcher Rebbe, Rabbi Yosef Yitzchak Schneersohn, acquired the collection of…
Books
Hippy In the Mikvah
“The Rebbe encouraged me to continue with the doctorate. I blurted out, ‘But what about the heresy?’ The Rebbe answered: ‘You should write all the…
Books
Book Review: Teaching The Teachers
I spoke to an Israeli kindergarten teacher this summer who explained to me how the philosophy of early childhood education has changed. “Today,” she said,…
Get Inspiration to your inbox!
Newsletter
Join our weekly newsletter for inspiration and updates
Donate
Find Your Local Chabad Center
Subscribe
|
Log In
Chabad
About Chabad-Lubavitch
About Chabad Lubavitch
The Rebbe
Headquarters
Magazine
Magazine
News
News & Updates
In The Media
Impact
Social and Humanitarian
Social and Humanitarian
Education
Education
Community
Community