Jewish Teens: Chabad Keeps Them From Opting Out 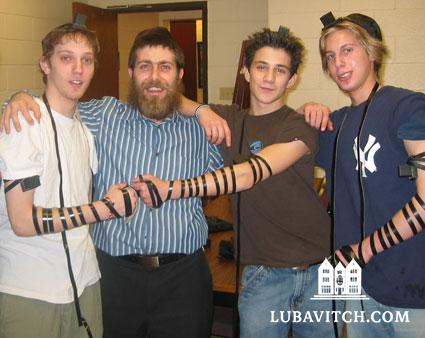 A frisson sizzles through Chabad of Flamingo as 90 teens swivel in their seats to see how their Torah for Teens rabbi will handle a high school senior’s challenge about why Judaism’s so uptight about tattoos.

Rabbi Shmuli Nachlas smiles. Year four into his booming Torah for Teens (T4T) program, and he knows what the group of 14-18 year olds want to hear. “They want to hear the real thing,” he said. “They are definitely looking for answers they haven’t heard until now.”

In 2002, Rabbi Nachlas, 28, was invited by Rabbi Mendel Kaplan to join Chabad @ Flamingo’s staff to serve as the youth rabbi. He and his wife Chani started teaching ten students that year. This year, 180 Jewish students, mainly from public schools like Westmount Collegiate High School have come on board. Some, like Westmount twelfth grader Evan March of Thornhill, Ontario, were drawn to the weekly course because it offers one high school credit per semester. “That’s what initially interested me, but if I didn’t like it, I wouldn’t have stayed.”

Spectacular growth and skyrocketing teen participation in synagogue activities bucks the epidemic post-bar and bat mitzvah dropout trend. In a September 2006 paper, Dr. Steven M. Cohen, a Research Professor of Jewish Social Policy at HUC-JIR, crunched National Jewish Population Study (2000-1) numbers and came up with a disturbing analysis. “For every 74 families in Conservative synagogues where the children are 6-14, there are 26 families with older children only, 15-17,” Dr. Cohen wrote. In the Reform movement, only 18 out of 100 member families have children 15-17 or older.

Chabad’s open door policy, its focus on reaching unaffiliated Jews, and its willingness to call any Jew male of age to the Torah could make it a likely place to host a quicky bar mitzvah. Chabad representatives are countering the “baruch ata, amen, goodbye” syndrome with programming especially for teens. With Chabad @ Flamingo’s full schedule of events, it is one of the bright lights, but certainly not the only Chabad center  reaching out to teens before they slip away and become a worrisome statistic.

Chabad @ Flamingo assembled a wedding cake of programs with tiers of involvement. Big holiday parties, like the meet, eat and shake a lulav event held after school during Sukkot is a way for teens to “get in touch and draw people in,” said Rabbi Nachlas. The parties “make Chabad Center their home, the place where they associate with meeting other Jewish kids and having fun. They are taster programs often leading to T4T involvement.”

At the parties or by word of mouth, the kids are introduced to T4T, a Jewish identity course for grades 9-12.  Aside from the course credit, students can up their GPA by doing well and improve their chances of receiving university scholarships. Of the 180 teens involved in the program, only 10% have parents who attend synagogue regularly. Usually, “parents don’t sign their kids up. The kids sign themselves up. They are not being forced to come. They come because want to.”

Over and over again, the topic of intermarriage sparks vocal, intense discussions. For many teens raised in mixed-religion homes and nurtured on Western ideals of equality, the topic rankles. The teens want to know, according to Chani Nachlas, “What’s wrong with it? Should I marry a Jew just not disappoint my parents?”

High school senior Melissa Perez of Thornhill has been attending T4T for four years. “The whole course teaches you how to look at Judaism from a whole different perspective,” she said. The Nachlases’ open-minded attitude “provides a stimulating Jewish environment. It is very positive.” Perez accumulated enough T4T credits to graduate a semester early from Westmount. She’ll spend her spare semester at a women’s yeshiva in Israel, an option she hadn’t considered before attending Chabad.

T4T participants get on the A-list for invitations to Chabad social events like Kosher movie night, where Jewish educational videos are screened and debated. There’s also Shulball, a night of basketball and Jewish talk. T4T’s New York weekend, where tourist hotspots are mingled with Jewish must-dos – like havdallah in Times Square – are always completely booked, as is their Montreal ski trip.

Last year, Chabad @ Flamingo introduced TSX, Thornhill Student Exchange, a mentoring program that pairs high school students with younger kids. TSX is an exclusive group of 30 high school students, trained by a committee of social workers, psychologists and teachers, who tutor and work on Jewish projects with their “mentees.”

Evaluating success of programs for teens is tricky, but Rabbi Nachlas offers hard core proof of the difference teen programming has made. Teens have hung mezuzahs on their doors, made commitments to give charity regularly, and dusted off their tefillin for regular use. On the High Holidays, Rabbi Nachlas ran for-teens-only services where honors were allotted to teens who won for bidding to keep new mitzvot such as keeping kosher for two weeks. Most tellingly, Chabad @ Flamingo’s first graduating class of Torah for Teens seniors are in university this year, and in response to their requests, the Nachlases are developing a college-level program.

No longer drop outs, Jewish teens in Chabad @ Flamingo are opting in.