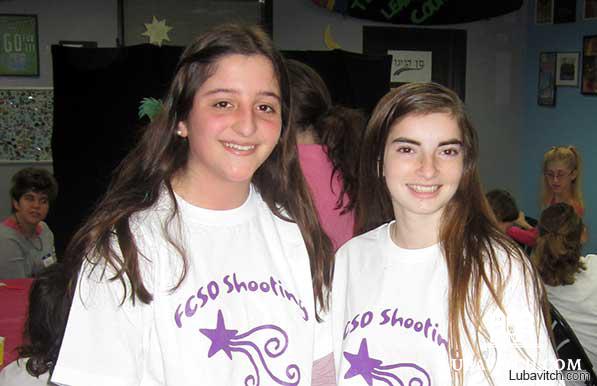 Chloe Dahan and Jamie Zimmerman. Below: Children with special needs work on their art.

Chloe Dahan, 13 and Jamie Zimmerman, 14, spent the summer before their 8th grade year avidly planning the various details of a new performing-arts program they designed for Jewish girls and teens with special needs. Under the auspices of San Diego’s Friendship Circle team, the program, called “Shooting Stars,” launched in September 2014 and has since garnered national attention.

In December, Tzivos Hashem: Jewish Children’s International announced that Chloe and Jamie were one of four winning entries in their annual “Power of Jewish Children” contest. The contest recognizes children under the age of 14 who have devoted themselves to a worthy cause and who have made a difference in their communities. Noted as “shining examples of the power of volunteerism,” the two young teens were selected for their impact on Jewish children in the San Diego community in such a short time frame.

Classmates and best friends, Chloe and Jamie are evidence of findings that the key to engaging youth is empowering them to become their own leaders. When teens take charge of their own Jewish journeys and engagement, they often go on to live vibrant Jewish lives.

The two first attended a Friendship Circle special-needs awareness workshop when they were just 10 and 11 years old. Regular participants in Friendship Circle events, the girls developed a special bond and soon started volunteering for weekly at-home visits with special needs children. The fulfillment of their involvement made Chloe and Jamie take it to the next level.

“We were inspired by all the work the Friendship Circle does and decided to create our own program,” says Jamie. Thinking of activities they themselves would enjoy, they decided to create a venue for special needs kids and teen girls to come together and explore the world of performing arts. Completely self-directed, the two began organizing the program, designing fliers, planning the curriculum and recruiting friends, volunteers and local performing-arts experts to participate.

As the planning progressed, the girls consulted with the executive and program director of the Friendship Circle for tips and advice, but took charge of all the coordinating themselves. Whether it was drama, dance, costumes, singing or a puppet show, the girls were constantly coming up with new ideas.

“We really committed to it,” says Jamie. “We talked about it all the time. We planned it at school and out of school. We’d think of something and text pictures to each other of art projects we thought would be fun and send each other links.”

Being the same age as the volunteers they were trying to attract helped them decide what activities to choose.

“As we were planning, we realized we wanted to make the program just for girls,” explains Chloe. The girls-only atmosphere would create a safe space for the young teens and kids to express themselves comfortably.

Their hard work paid off. The first event drew 10 special needs kids and volunteers and by the third event that number had already doubled. The Tzivos Hashem prize turned the lens on their work, and Jamie was in Brooklyn at the award dinner on December 9th to accept the prize for both of them.

“One of the prizes was $500 to give to the charity of our choice,” Jamie says. “We got to donate it to our own organization which was very helpful since we are self-funded.”

Impressed by the leadership skills they showed in planning and executing the program, it was Elisheva Green, executive director of the Friendship Circle of San Diego, who originally nominated the girls for the award. As the director of a teen-oriented program, Green recognized the importance of actively engaging the next generation to ensure a vibrant Jewish future strongly rooted in Jewish values.

“At the Friendship Circle we are constantly trying to empower our volunteers and give them the skills they need to do great things,” says Green. “Seeing these girls, at such a young age take the initiative to create a new program is a testament to the power of youth.”

In the United States there are approximately 540,000 Jewish teens (ages 13-18), yet in most communities any organized Jewish programming attracts less than 20% of the total potential audience. The teen years represent a critical period of identity development on the journey to adulthood, and experience shows that when young people engage in effective Jewish experiences as adolescents, they are more likely to choose to live vibrant Jewish lives as adults.

According to studies publicized by Child Trends Data Bank, most teenage volunteers who plan on completing four-year colleges, shun drugs, and avoid the pitfalls of unplanned pregnancies. They tend to do better academically, psychologically, and the Bureau of Labor statistics even correlates higher earning power with youthful volunteering.

These meaningful statistics aren’t lost on parents. For Yoram Dahan, Chloe’s dad, watching his young daughter actively engage in a leadership role that is self-directed, rooted in Judaism, and provides a tremendous service to a community in need, has proven to be “the most fantastic nachas experience of a parent.”

Observing his own child, “on her own merit, coming up with ideas and putting everything together and then seeing it come to fruition” have made quite an impact on the entire community.” When other children saw what Chloe and Jamie were doing, they too wanted to help and began volunteering and pitching in.

Celena Zimmerman, Jamie’s mom, brimming with pride at seeing her daughter take on such a mature role in giving back to the Jewish community says that it is especially meaningful to her to see “how much joy and happiness and fun they bring to these special needs kids, and they are also giving these kids’ parents a much-needed break.”

Chloe and Jamie are just getting their engines revved up with plans to take the program national.

“We have really big dreams for the future of this program,” the girls, bursting with ambition, offer.

Related Articles
View All
Musicians With Special Needs Release Recording
Chauffeured in limousines, dressed in formal attire, prepped by stylists, these aspiring musicians with special needs had the red carpet rolled out for them and…
Striving for Inclusion, Chabad Inspires Opening of Retail Shop
When parents of adults with special needs wanted to organize a group home in Charlotte, North Carolina, Rochel Groner had another idea.
UJA Awards Chabad’s Friendship Circle Leaders
(lubavitch.com/LNS) Friendship Circle Ontario coordinators, Chabad's Mrs. Esther Grossbaum and Mrs. Chaya Perman, were recently honored with the distinguished UJA Federation Inclusion Initiative Award. “What…
Michigan Friendship Circle Breaks Ground For New Facility
“We all grow up and have a dream that we will get married and have children. We just take it for granted that our children…
Children With Special Needs and Their Parents Applaud Chabad’s Friendship Circle
“A model for a Jewish People unified by shared goals and ideals,” is how Dr. Talya Fishman describes Friendship Circle of Chabad of the Delaware…
Get Inspiration to your inbox!
Newsletter
Join our weekly newsletter for inspiration and updates
Donate
Find Your Local Chabad Center
Subscribe
|
Log In
Chabad
About Chabad-Lubavitch
About Chabad Lubavitch
The Rebbe
Headquarters
Magazine
Magazine
News
News & Updates
In The Media
Impact
Social and Humanitarian
Social and Humanitarian
Education
Education
Community
Community