One thousand five hundred participants sign up to meet their match 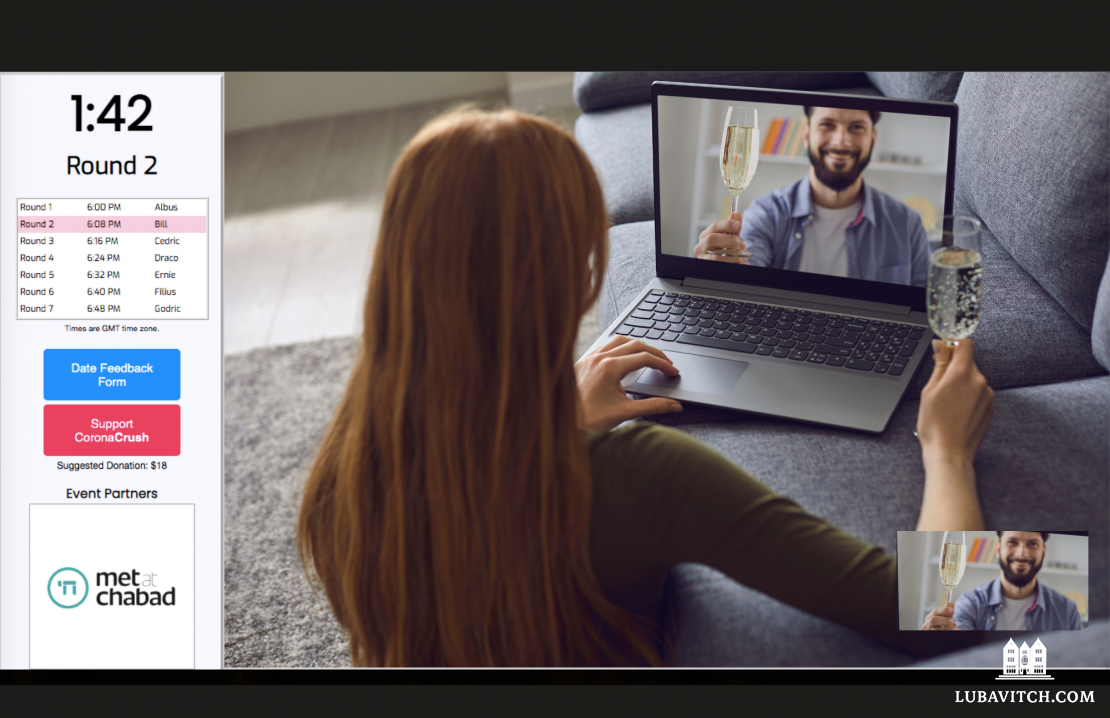 Intermarriage rates continue to rise as more than half the number of Jews–60 percent– who married over the last decade, chose a non-Jewish spouse. According to the 2021 Pew Research Study of American Jewry, that’s up from 45 percent in the 2000s and 37 percent in the 1990s.

Giving Jews more opportunities to meet other Jews seems to be an obvious way to make some dent in this crisis, and Chabad’s Young Jewish Professionals division has been creating and hosting social events that do just that. Met@Chabad is one such program and last month, it attracted 1,500 young Jews from around the world who signed up for a virtual speed dating event.

“Shluchim around the world know thousands of young Jewish professionals, and they’ve always been looking for a way of connecting them,” explained Rabbi Beryl Frankel, the Director at Chabad Young Professionals International. The speed dating event did just that, connecting individuals from over 250 Chabad houses who had joined forces for the venture.

The event was held on a new virtual dating platform called Corona Crush which sends participants to one-on-one break-out conference rooms. Based on a series of questions they answered prior to the event, each participant was matched on average, with five to seven dates, each lasting a brief eight minutes.

Rachel (name has been changed for privacy), a psychotherapist from Manhattan’s Upper East Side, has been a member of her local Chabad Young Professionals branch for seven years. She has participated in other speed dating events in the past, but prefers the virtual version because of the privacy it affords. “You’re able to get to know somebody in a really comfortable, intimate way.” Although she has yet to find her match, the experience, she said, was a positive one.

“Even if someone did not ‘match’,” said Rabbi Yosef Wilhelm, director of CYP of the Upper East Side with his wife Devora, “the fact that they see that there are people out there who meet their criteria is very positive.”

But 58% of participants did match, meaning both they and one of their dates expressed mutual interest in getting to know each other further beyond the event. Ian Mark, co-founder of Corona Crush, said that’s the second highest match rate they’ve ever had on the platform, out of forty five events. “To be able to invest in one hour and have over a 50% chance of matching with someone under the serious context of marriage is mind-blowing,” he said. The event was also the largest Corona Crush has ever hosted, which likely contributed to the high match rate.

Sunday night’s event was a beta-event, with many more speed-dating programs in the works. CYP is working with professionals on a comprehensive algorithm to match singles based on their goals and values.

In addition to speed dating events, the Met@Chabad program will also include a matchmaking system, a singles profile database for shluchim, a dating app, and other workshops and resources.

Met@Chabad is being developed in partnership with Chabad on Campus, with generous funding from the Eliyahu Foundation and the Meromim Foundation. “The vision is that Met@Chabad will educate singles about the importance of marriage, both from a Jewish perspective and in general,” commented Rabbi Moshe Kotlarsky, vice chairman of Merkos L’Inyonei Chinuch, the educational arm of the Chabad-Lubavitch movement.

Corona Crush typically works with around two to three partnering organizations on an event. Scaling it to accommodate 250 shluchim was quite an undertaking, but the shluchim’s unity really motivated him, said Ian. “It was incredible how supportive everyone was. All of the shluchim really loved what was going on and were eager to help and be involved.”

Related Articles
View All
Lifecycle
Travel Deals, Points, Miles, And a Jewish Burial
How anonymous points hobbyists helped complete the burial of Dr. Jay Goldstein
Lifecycle
A Nation is Born
A family? A race? A religion? How do we define Jewish peoplehood? Does it matter? To Read The Full Magazine Story Log In Subscribe Subscriptions…
Lifecycle
Four Brit Milot, Four Cities, Four Days
It was a whirlwind week for Rabbi Yossi Simon, director of the Chabad House of Golders Green in London, England. The rabbi, who is also…
Lifecycle
Paying It Forward
The post on the WhatsApp group shared by Chabad reps described the situation: A young dad in some remote town in a province of northern…
Get Inspiration to your inbox!
Newsletter
Join our weekly newsletter for inspiration and updates
Donate
Find Your Local Chabad Center
Subscribe
|
Log In
Chabad
About Chabad-Lubavitch
About Chabad Lubavitch
The Rebbe
Headquarters
Magazine
Magazine
News
News & Updates
In The Media
Impact
Social and Humanitarian
Social and Humanitarian
Education
Education
Community
Community