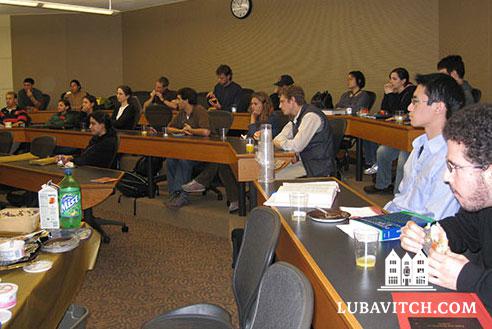 Students with Chabad at Stanford University.

(lubavitch.com) Jamie Zebrak, a senior at the University of Oregon, has seen Jewish involvement on campus grow five-fold since she started here as a freshman.

Four years ago, Chabad was getting 5-6 students at their Shabbat dinners. Rabbi Asi and Aviva Spiegel had arrived in 2002 to serve as Chabad representatives to this scenic city where they were just beginning to build their own family.

A few weeks ago, the Spiegels, who are now expecting their fifth child, moved out of their living quarters that doubled as the campus’s Chabad student center.

"With 20-30 students joining Chabad for Shabbat dinners, and double minyans when once we barely struggled to put a minyan together, we needed the space," says Zebrak, an Emerson Fellow and President of the Chabad Student Center.

The Spiegels moved three doors away, close enough to their former home which is now entirely dedicated to the students. There, a wide array of social and educational opportunities is attracting greater numbers of the university's 1500 Jewish students who are increasingly becoming involved in Jewish life.

Jewish students who might "spend the night drinking beer," says Zebrak, often choose instead to hang out at Chabad where "not only do they discover their own Judaism, but where Chabad opens a door to their souls."

Rabbi Menachem Schmidt, President of the Chabad on Campus International Foundation, says the growth at the University of Oregon mirrors the movement’s growth across the country. Today, Chabad chapters are bona fide student organizations at numerous campuses, many with beautiful student centers, and others like the Chabad center at the University of Oregon, are launching capital campaigns to buy and build suitable facilities.

"We've reached a level of maturity where we now have more than 100 Chabad centers on campus, with a substantial network of Shluchim who are employing very sophisticated resources, with people tied into every part of the academic community. And we're beginning to see exceptional results," says Rabbi Schmidt.

Wayne Firestone, President of Hillel, acknowledges that although Chabad’s approach differs from Hillel’s, “Chabad shares our visions. We share a common mission to engage Jewish students and to connect them with their Jewish identities.”

Chabad and Hillel often co-sponsor local programs, and, says Mr. Firestone, “Hillel enjoys a warm and productive relationship with our Chabad colleagues at the national and local level.”

Chabad's increased presence on U.S. campuses (11 opened in the past year, and five in the UK) is in part also a response to the new presence of Jewish students at a bevy of smaller colleges that are now actively recruiting Jewish students. With 130 on-site Chabad centers worldwide, Chabad offers a Jewish infrastructure that often factors into students’ decisions when applying to college.

Samuel G. Freedman, Professor of Journalism at Columbia University, who is also a Faculty Advisory Board member of Chabad at Columbia, has observed the impact of Chabad's activities at his campus.

"College is a time for students to explore and experience new things, and traditionally, that's meant students move away from religion." Yet Chabad, which he describes as “an increasingly visible and joyous part of student life at Columbia,” has actually brought "students toward Jewish life," and has shown that if students get turned on to Judaism during their college years, they will carry it with them well after they've moved on.

This weekend, 900 students from campuses nationwide will be arriving to Lubavitch Headquarters in New York for the annual campus International Shabbaton and Conference 08, sponsored by the Chabad on Campus national office.

That's an extraordinary spike in attendance, up from the 50-60 students that were coming to the Shabbaton only a few years back, as is the number of students—in the hundreds at some colleges—who join their campus Chabad for Shabbat dinners every week.

One of the remarkable developments, say campus Shluchim, is the vibrant leadership rising from within the student ranks. This year’s Shabbaton features a day-long program where 60 Chabad student presidents will convene for leadership training.

"We want to provide students with skills that will empower them to become active in the development of social and educational programs to further enhance the choices of Jewish activities on any given campus," explains Rabbi Yossy Gordon, executive director of Chabad on Campus International Foundation.

The Shabbaton program includes informative and inspirational sessions running back-to-back over the course of the three days, giving students the opportunity to explore leadership and Jewish identity from different angles, and from a rich diversity of voices.

Mrs. Keren Blum, co-director of Chabad at Columbia University says the New York Shabbaton "immerses students in an anthropological experience that allows them to make connections" and opens them up to becoming involved in Jewish life once they are back on campus in a tangible way, where "they will commit to a mitzvah, or choose to join a weekly Torah study class."

Looking ahead to the 2009 academic year, Mrs. Chana R. Novack, co-director serving Washington University in St. Louis says, "we want to lower barriers to entry, in terms of cost, location, and accessibility, and maximize the quality of our programs so that they are more meaningful and substantive."

Enhanced programming will attract greater participation, intellectually and practically in Jewish life, but maintains Rabbi Schmidt, nothing is more effective than the unique paradigm that Chabad Shluchim bring to the campus.

"Chabad is exceptional in the model of the Jewish home and the Jewish family that it brings to Jewish students on campus," offering students the only year-round access to a real Jewish home peopled by parents and children who live a fully integrated Jewish life.

Chabad Campus centers do not often enjoy ongoing support from their local Jewish federations or the organized Jewish community, (a situation Schmidt expects will change), and are responsible for raising their own budgets. With the economic slump, they're bracing to work harder now.

"Some of our graduate students who were committed to supporting Chabad on campus this year just lost great jobs," says Keren Blum. A disappointment, to be sure, but neither Keren nor any of the Chabad shluchim interviewed for this article spoke about cuts in programming.

"The situation we're in now shows the genius of the Rebbe's vision, and the beauty of the way the Rohr Campus Foundation was set up," says Schmidt, referring to the funding that new campus Shluchim receive for the first three years, after which they must develop their own fundraising base. "It's a system that has created a lot of stability, and we're seeing that now, when things could have been a lot worse."

At the recent dedication of the new Chabad student center at Binghamton University, Mr. George Rohr, a name synonymous with Chabad on Campus, said that after studying many charitable organizations, he's found time and again, "that Chabad has the best value for the buck."

Michael Denis, a graduate of UC San Diego, is one of countless examples that bear out Mr. Rohr's claim. At 22, Michael is an officer in the Marine Corps, with a kippah on his  head, and tefillin in his bag. He also has a standing request for kosher MREs and for his fellow officers to cover him when his shift falls on Shabbat.

Speaking with lubavitch.com from his base in Mission Valley, San Diego, Michael says that he grew up in a secular home in San Jose, and discovered Judaism in his teens when he met up with Chabad. It was only when he got to college and began studying with the campus Chabad rabbi, Yehuda Hadjadj, that he began to really explore Judaism in a way that made it personally relevant to him.

"Were it not for Chabad on campus," says the Marine officer, "I'd probably be nowhere, in terms of Judaism."

Today, Michael is dating Jewish women. Before his exposure to Jewish life on campus, he says, none of the girls he dated were Jewish.

"Were it not for Chabad," he offers, "I would have married out."

Related Articles
View All
Chabad Jewish Student Center Dedicated at Binghamton University
(lubavitch.com) The Chabad Center for Jewish Student Life was inaugurated Sunday as some 500 students, professors, and supporters looked on. The 24,000 square foot building that services…
Anonymous Donor Doubles Chabad Presence at UK Universities
(lubavitch.com) At the start of the UK academic term, six new Chabad representative couples will be greeting students at freshers fairs at some of the…
Campus
Two Universities React as Antisemitism Steps Out of the Shadows
While college administrators debate the limit of free speech, Chabad campus leaders take action.
Campus
Popping Bottles With Intention
“I’m still popping bottles, but instead of popping them at a bar or nightclub, it’s at the Shabbat table. It’s the same hustle but with…
Campus
Israeli Minorities Find A Platform at Stanford University Chabad
Less than twenty-four hours before it was due to begin, an event scheduled to take place at Stanford University’s Hillel facility earlier this week was…
Campus
In Irma Aftermath, Campus Chabad Stays Put and Open
"A disaster like Hurricane Irma can be frightening, but it also brings people together and highlights the wonderful community on campus."
Get Inspiration to your inbox!
Newsletter
Join our weekly newsletter for inspiration and updates
Donate
Find Your Local Chabad Center
Chabad
About Chabad-Lubavitch
About Chabad Lubavitch
The Rebbe
Headquarters
Magazine
Magazine
News
News & Updates
In The Media
Impact
Social and Humanitarian
Social and Humanitarian
Education
Education
Community
Community