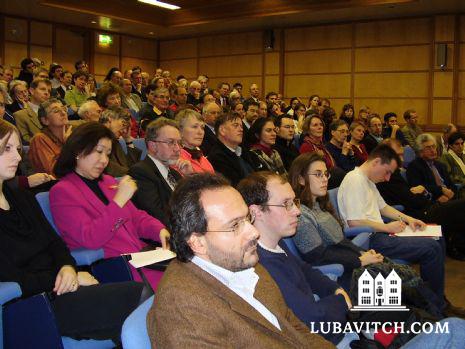 Faculty and students at a Chabad Oxford Society lecture.

(lubavitch.com) At the start of the UK academic term, six new Chabad representative couples will be greeting students at freshers fairs at some of the country's top universities. The expansion more than doubles Chabad on Campus UK’s previous scope.

An anonymous donor who had become fond of Chabad during his years at Oxford University is funding the initiative.

To date, Jewish students at Oxford, Cambridge, University College London, Brighton, Sussex, Leeds Universities, and University of London in Bloomsbury have benefited from campus Chabad representatives, but says Rabbi Eli Brackman, Chairman of Chabad on Campus UK and director of Chabad at Oxford University, the time is ripe for growth.

“What we are doing is crucial for the future and continuity of Jewish life on UK campuses and Anglo-Jewry,” said Rabbi Brackman.

By the end of next year, Chabad will appoint representatives to serve Jewish students at yet more of UK’s campuses, Rabbi Brackman disclosed to Lubavitch.com.

The expansion builds on Chabad’s presence on university campuses in the UK for “forty years, led initially by Rabbi Shmuel Lew,” said Rabbi Brackman. Rabbi Lew, a member of Lubavitch UK’s executive board, is on the Chabad on Campus UK advisory board, guiding the expansion, together with Rabbi Yirmiyahu Angyalfi, Dr. Naftali Loewenthal and Rabbi Reuven Leigh.

Most of the universities chosen as homes for new representatives met several criteria – a sizable Jewish student body and no Chabad rabbi in the city. University of Edinburgh met these qualifications, and so Rabbi Pini and Gitty Weinman are on their way to open a Chabad center that will serve Jewish students at the 425-year-old campus.

Although Chabad has a well-established presence in London, the sheer number of students and universities there warranted placement of two additional representative families. An estimated 400,000 students choose to attend London universities, and roughly seven to ten percent of them may be Jewish.

Rabbi Mendy and Sara Loewenthal are off to Imperial College London, and Rabbi Dovid and Sora Cohen are establishing a multi-campus center in south London.

Another factor guiding placement was student demand. At these universities, “We’ve had feedback from students who say they would really like a Chabad house on their campus,” said Rabbi Reuven Leigh, director of Chabad Jewish Society at Cambridge University.
Leading several of the new centers are Chabad representatives with previous connections to the campuses they will serve.

For Rabbi Mendy and Brocha Lent, arriving at Nottingham University is a bit of a homecoming. Brocha Lent’s father grew up in Nottingham.

“It’s like going back to my roots,” Mrs. Lent said.

Her grandparents’ home in the leafy residential side of Nottingham shares little resemblance with the student area where cheap takeout restaurants vie for student pounds. Soon the Lents hope to be able to satisfy student appetites with falafel and middle-eastern fare, all kosher of course, at a weekly dinner they’ll cater from their doll-sized (by U.S. standards) oven.

Over at Bristol University, Rabbi Dovid and Leah Usiskin have an advantage; they are not new kids on the block. Rabbi Usiskin graduated from Bristol several years back, and sought deeper knowledge of Judaism because of his conversations with a Chabad representative during his university years.

South London’s new representatives Rabbi Dovid and Sora Cohen have had their share of conversations with Jewish university students during their 14 years as university chaplains in Scotland. Rabbi Cohen feels he understands where “students are coming from” and how to help them explore “the fun and meaningful side of Judaism.”

Surrounded by boxes ready for the move to Wimbledon in south London, Rabbi Cohen told Lubavitch.com that he’s looking forward to helping Jewish students network with each other. Though the number of Jewish students respectively, at Kingston, Roehampton, Surrey, St. George’s Medical School, Goldsmiths, Greenwich, Royal Holloway and Wimbledon School of Art, is small, taken together they add up to a sizable number and the Cohens will reach out to them all.

Uniting students with disparate interests and attending different universities, shuttling between the campuses, will be a challenge the Cohens are ready to take on.

“When you see students enjoying Judaism and feeling a sense of belonging, it makes it all the effort worthwhile.”