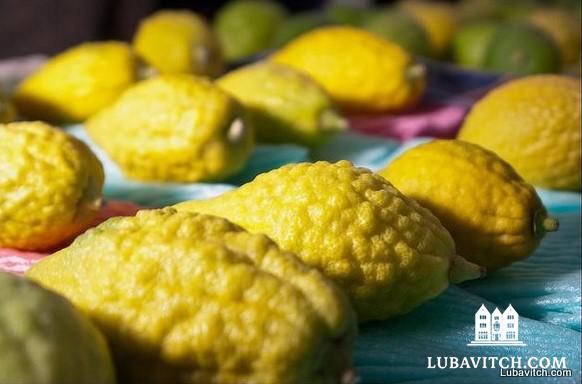 It may bear resemblance to its cousins, but the esrog is no simple citrus. Unlike its relatives, the esrog is not peeled and eaten neat. Instead, its thick white rind is cooked down in sugary bliss and enjoyed as a confection. Citrons are also used in alcoholic beverages, candles, and soaps.

But, of course, that’s all secondary. The esrog’s primary occupation is during the fall festival Sukkot, when it is united with palm, myrtle, and willow branches to form the Four Species. The three latter plants are combined into a heady bouquet and then shaken alongside the esrog.

It takes a lot before that little esrog is ready for prime time. Incredibly susceptible to the elements, the tree’s viability depends largely on each season’s conditions. A freezing winter will stunt its flowering, too much sun or rain will cause the fruit to wither, and then there are the bugs. “We are in a continuous war with the bugs,” sighs Nachum Luria, from his farm in Kfar Chabad, Israel.

“We need to have the proper balance of pesticides, enough to kill the bugs but not too strong to make marks on the esrogs. No one cares on an orange or another fruit, but any little blemish devalues an esrog.” Luria has been babying his citrons for decades. Unlike other produce, which can be left largely untended until harvest time, the esrog needs special care. “The whole year, all day, we take care of our esrogs,” he shares. “We protect them from the branches, from the leaves themselves, from the weather.” When harvest finally rolls around, one fruit is chosen at a time, then carefully held as the picker climbs down the tree to deposit it in its own cushioned box. Talk about individual attention.

The trees Luria lovingly tends have been growing in this Israeli village since 1966. His father-in-law Rabbi Eliyahu Rivkin, who founded Etrogei Lubavitch, was given an Italian esrog from the Lubavitcher Rebbe. He returned to his Israeli village, pulled out his nascent crop, and replanted an entire orchard from that one fruit. The Lurias like to say they grow Calabrian esrogs in Israel.

The distinction is significant. According to Chassidic lore, when G-d commanded Moshe to acquire an esrog, the faithful servant questioned where he could procure one in the desert. A cloud whisked away to Calabria and returned with the finest of the species. Since then, many Chabad and other Chassidic sects prefer these esrogs from Italy’s lowest region, the toe of the boot.

For the last 42 years, Rabbi Moshe Lazar has supervised the Italian operation. He travels 1,100 kilometers from his home in Milan to the fields of Calabria several times annually. “If we wouldn’t have to worry about grafting,” he explains fieldside, “we could make two phone calls and have an entire shipment ready instantly.”

The esrog tree’s delicate nature and shallow roots give it a significantly shorter, less stable life expectancy. Farmers, therefore, are tempted to graft the tree to one of its hardier cousins, say a lime or mandarin orange tree. But grafting makes the fruit unkosher for use in this mitzvah. Rabbinic inspectors check each tree’s roots to ensure that the fruit is genetically pure.

Since he was 14, Efrayim Keller has spent each summer inspecting row after row of esrog tree. He used to come with his father, and now he sometimes brings his own children. The fruits he picks are packed and shipped back to America with individual certificates from the Italian government. Come Sukkot, they can be found around the United States and as far away as Manchester, Bangkok, and Costa Rica.

Summers in the field are hot and hard, he says. Upwards of 20 percent of the esrogs picked are instantly discarded as unfit for the mitzvah. Even though a single kosher esrog can command 50 dollars (and some sell for hundreds of dollars), the amount of work put into each fruit does not always equal profit for the merchants. Today Keller continues a tradition his father began in 1970: when he finds a beautiful piece, he sings and dances. The farmhands, who likewise came of age in these fields, join in.

Calabria is one of the least developed regions of Italy and farmers depend on the reliability of the Jewish esrog market. When he first visited in the 1960s, Lazar recalls farms of tomatoes, grains, and citrons. Today, those little family farms have joined to produce one single, lucrative product, the esrog. Farmers who spend much of the agricultural season tending these plants, covering, spraying, and inspecting, are grateful for the income they represent come fall.

They are also interested in another aspect of the Jewish culture, their own. In recent years, many locals have begun digging into their roots, discovering Jewish blood. Entire towns and villages can trace their heritage to conversos who were forced to convert to Christianity 500 years ago. Some kept their Judaism secretly, others knew nothing of their past. Throughout the year, Lazar is invited to speak to locals across the region eager to learn more of their heritage. The Italians here hosted a candlelight march to mark The Day of Remembrance. Hundreds gathered last month to celebrate the esrog and its religious importance in the fields.

“We are here to pick the fruit,” Lazar says. “But G-d has different intentions. These Italians want to connect with the Jews and perhaps this is the real reason we are here.”

Related Articles
View All
Sukkot in Donetsk
Like dozens of cities in Eastern Europe and the former USSR, Donetsk, one of the largest cities in Ukraine, was home to a thriving Jewish…
Have Lulav?
Sukkot begins this Wednesday night, and in the days prior, Chabad-Lubavitch centers are encouraging community members to obtain their own set of the lulav and…
Holiday & Shabbos
Sweet and Sweeter
Rosh Hashanah, Yom Kippur, Sukkot, Simchat Torah . . . the holidays in the Hebrew month of Tishrei are chock-full of traditions uniquely symbolic of…
Holiday & Shabbos
Remembering Sinai, Reliving the Experience
A survey by Kelton Research found that less than six in ten Americans knew the sixth commandment, “Thou shalt not kill”
Holiday & Shabbos
Rabbi Dovid Olidort: Behind The Iron Curtain
These are the personal Shabbos stories of an eclectic group of influential personalities
Holiday & Shabbos
Tu B’Shevat: Where’s the Fruit?
This plant-based holiday takes place in the middle of winter. Considering that the fruits of the trees haven’t yet begun to grow, why celebrate the…
Get Inspiration to your inbox!
Newsletter
Join our weekly newsletter for inspiration and updates
Donate
Find Your Local Chabad Center
Subscribe
|
Log In
Chabad
About Chabad-Lubavitch
About Chabad Lubavitch
The Rebbe
Headquarters
Magazine
Magazine
News
News & Updates
In The Media
Impact
Social and Humanitarian
Social and Humanitarian
Education
Education
Community
Community