It Takes A (Jewish) Village

In small towns with scarce resources, parents ask, “If it’s so hard, why am I doing it?” 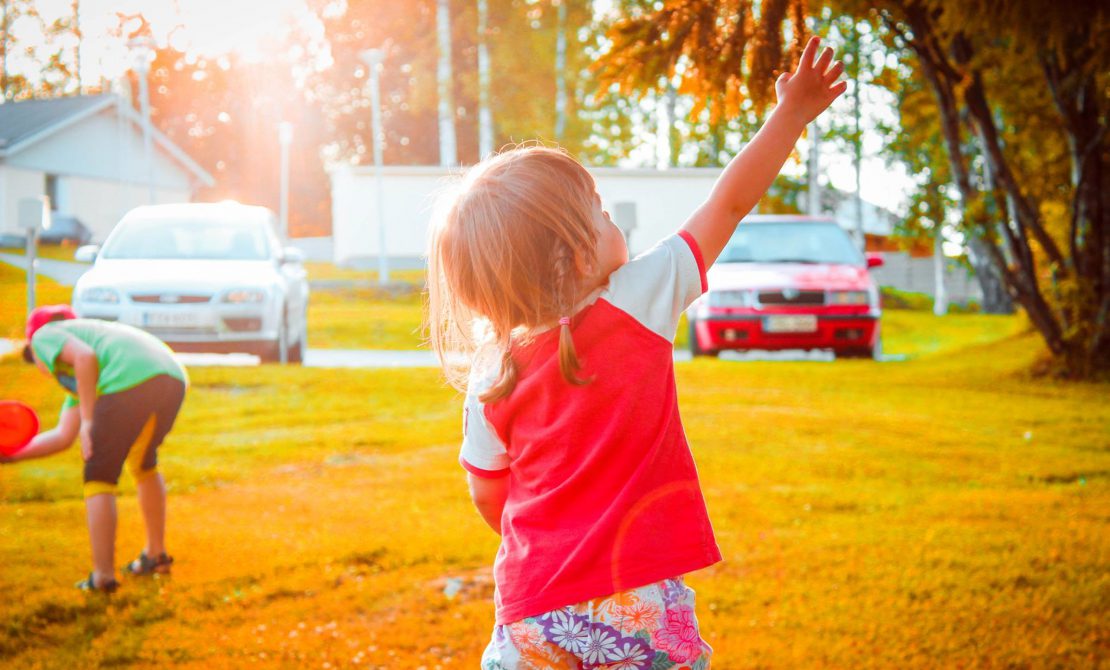 In a place where the Chanukah aisle at Target is tiny, like the kosher aisle in the local supermarket, Jewish parenting means being proactive.

All News
By Chava Leiba Witkes

Portland, Oregon, is known for its microbreweries and bike lanes, not its Jewish life.“I get so many weird questions,” said Rachel Hall, a life-coach who sends her kids to the area’s Chabad-affiliated Gan Preschool. “In most of my social circles, I’m everyone’s only Jewish friend. I basically have to educate everyone around me.”

How to foster a strong Jewish identity among children whose worldview is so strongly influenced by peers? “I try, but my children don’t want to be different. They want to fit in.” Rachel chose the Chabad preschool because she wanted her kids to have a different experience. “I work really hard to surround my kids with lots of other Jews.”

In a place where the Chanukah aisle at Target is tiny, like the kosher aisle in the local supermarket, Jewish parenting means being proactive. “Here in Portland, we constantly have to analyze and ask ourselves, ‘If it’s so hard, why am I doing it? Does Judaism really matter to me?’”

It’s a question that many Jewish parents ask, and one that has brought three leading Jewish organizations together to help parents explore. Yaldeinu, the brainchild of The Rohr Jewish Learning Institute, the Avi Chai Foundation, and the Kohelet Foundation, is an innovative leadership forum now halfway through its two-year pilot phase. 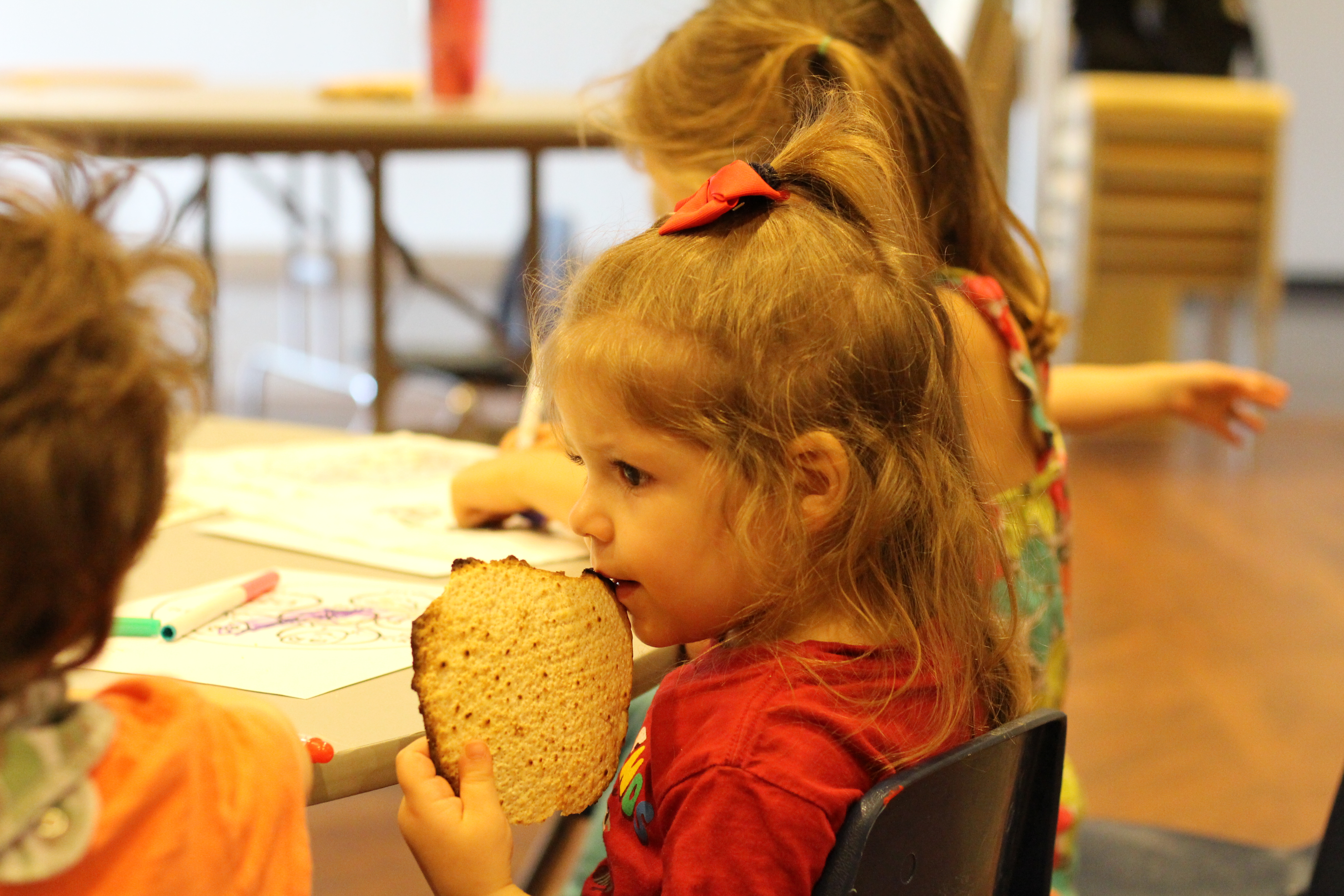 A child in Memphis, TN takes a bite out of their freshly-baked matzah at a Yaldeinu program (April, 2017).

“We’re not here to provide the answers,” Deena Fuchs, director of Avi Chai, explained in a conversation with Lubavitch International. “Our goal is to engage young parents in exploring a Jewish way of evaluating questions.” And while Birthright and BBYO have their own, important demographics, Yaldeinu has a different focus: families.

Built on the premise that “young parents raising young children are the vital building blocks of Jewish continuity,” Yaldeinu, says Rabbi Efraim Mintz, director of the Rohr Jewish Learning Institute (JLI), wants to “engage this population and give them a deeper connection to their Judaism.”

Launched last September in ten cities across the country, each with strong Jewish educational outlets, the program includes monthly get-togethers and periodic social and holiday programming. Chabad emissaries facilitate the experience, identifying parents of preschool children with leadership potential and inviting them to join conversations about Jewish parenting, identity, and values.

A group of couples—all parents of toddlers—might get together for a guided painting class, a group life-coaching session, or a volunteering effort for a community food bank. The social aspect gave way to heart-to-heart talks about everything Jewish parents might struggle with. Instead of traditional lecture-style teaching, learning happened through organic group discussions.

Rabbi Yossie and Rivkie Denburg from Chabad of Coral Springs use a WhatsApp group as a platform to keep discussions going. After each session, Rabbi Denburg posts one point of review from that night’s class and poses a practical question to the group. “It’s great way to open the floor to further exploration,” the rabbi observes. “It also helps the parents integrate the Jewish values we talk about into their daily lives.”

Conscious parenting means being intentional about every aspect of life. As part of the workshop exercise in Redondo Beach, California, participants pause at the end of each session and think of one way to incorporate Judaism into their lives. Chabad representative Sarah Mintz finds it transformative, making mitzvahs “more realistic” and empowering participants to “go out there and inspire their friends. “This is what Yaldeinu is all about: parenting mindfully, pausing and paying attention to how we live and how we can actively incorporate Judaism in our daily lives.”

The desired outcome of Yaldeinu is that these couples develop skills to live Jewishly. Clarifies Deena Fuchs of Avi Chai: “When we say ‘living Jewishly,’ we don’t mean counting the number of synagogue services attended or kosher meals eaten. We are looking to kindle a penetrating realization that our own tradition is rich with wisdom, that Jewish education is essential. We want parents to stop and think: ‘I’m about to have a difficult conversation with my spouse or child. What’s the Jewish approach to moving forward​?’​”

As the pilot program moves into its second year, Rachel Hall reflects.“Who knew this time with my husband and other couples would be so fulfilling?” The experience gave her and her husband a chance to prioritize time together and work on their marriage. As a result, they both “feel more confident as Jewish parents and as leaders in the Jewish community in general.” The sessions were a great balance between thoughtful discussions and spontaneous fun, and, she adds, her Chabad leaders, Rabbi Motti and Mimi Wilhelm served as “great role models for value-driven decision-making. They put an emphasis on relationships and what’s important in life.”

​In Fort Washington, Pennsylvania, Rabbi Shaya and Devorah Leah Deitsch have proudly watched participating couples “take leadership roles in Chabad and embrace their Judaism.” After a year of getting together, the parents are starting to become ambassadors to the rest of the preschool.

There are almost 300 Chabad preschools across the country and the number of young families whose singular Jewish affiliation is their child’s preschool is in the thousands. “Too often,” notes Holly Cohen of the Kohelet Foundation, “the affiliation ends when their children grow out of the preschool years. “We want to support shluchim in turning their preschools into a powerful point of entry for a family’s Jewish life.”

Without a strong support system, raising kids can be extremely difficult. “Yaldeinu brought us together,” says Mintz. “We are all parents going through similar challenges, and we created a supportive community to help each other.” Because it takes a village, and then some, to raise a proudly identifying Jewish child. 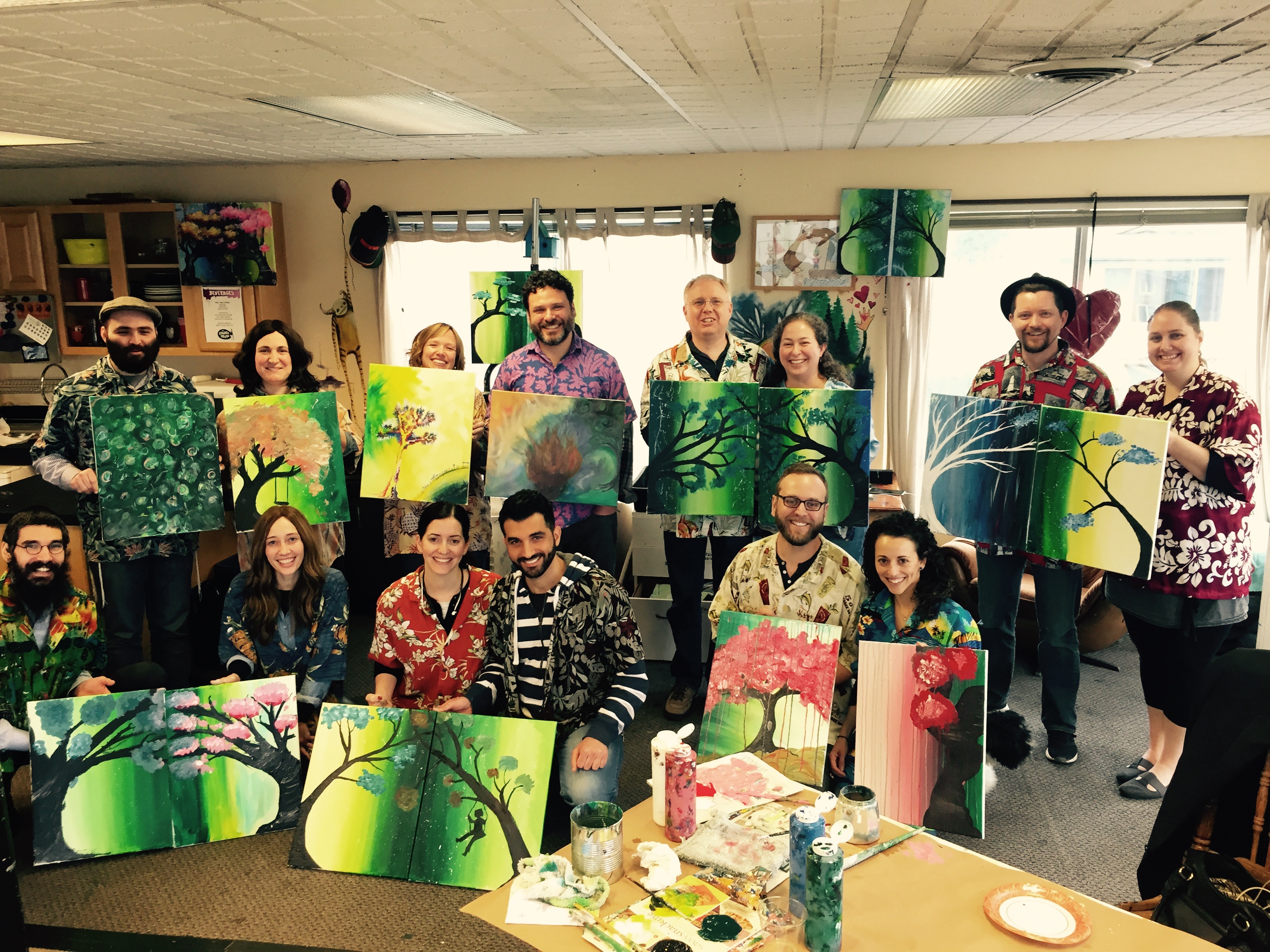 A “paint-nite” in Portland, OR brings together parents of young children, fostering a sense of community. 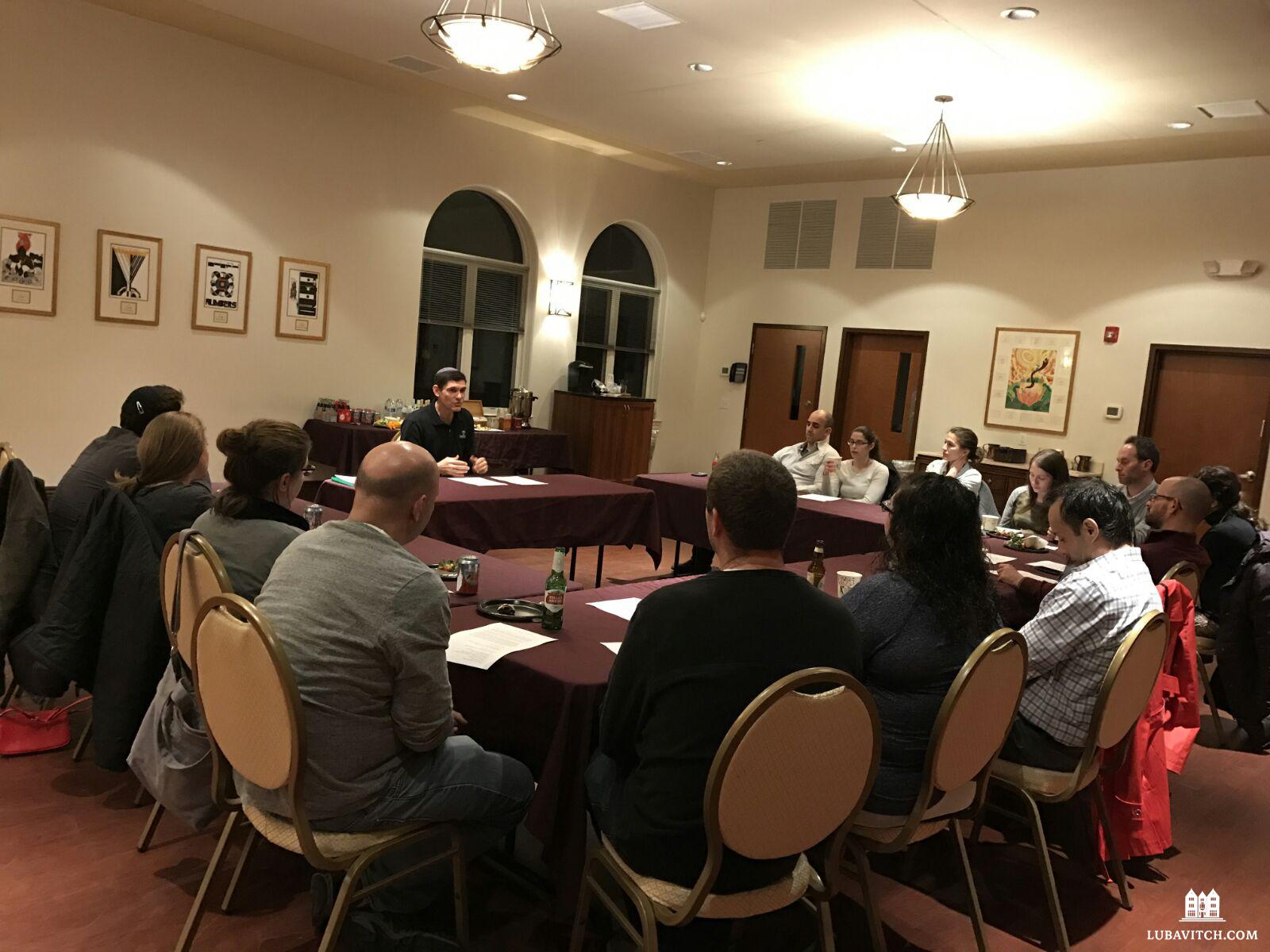 Parents in Kansas take the lead in classes and parenting workshops. Deena Fuchs of Avi Chai describes the purpose of Yaldeinu: We are looking to kindle a penetrating realization that our own tradition is rich with wisdom, that Jewish education is essential. We want parents to stop and think. 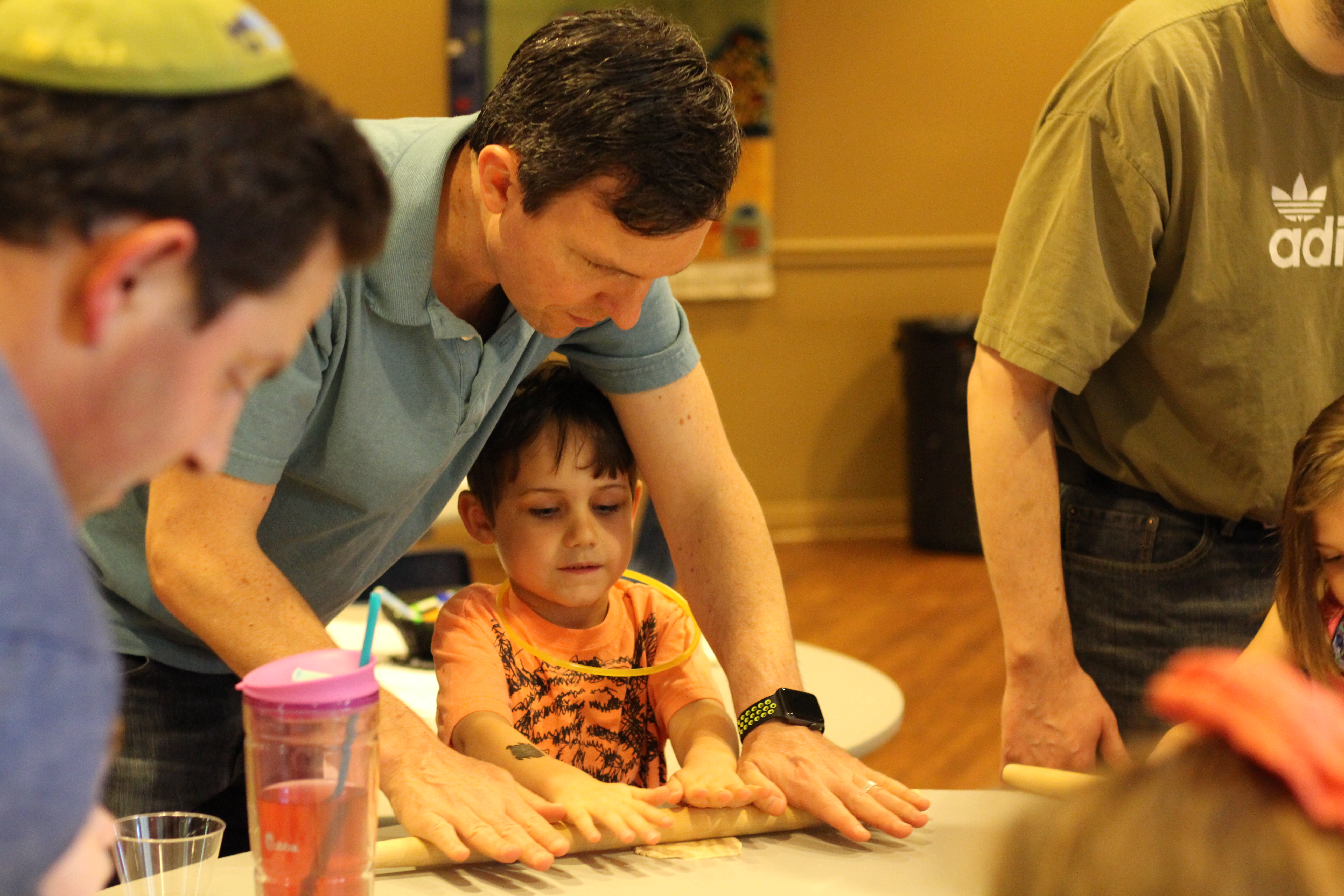 A parent and child in Memphis, TN bake matzah together at a pre-Passover Yaldeinu event.