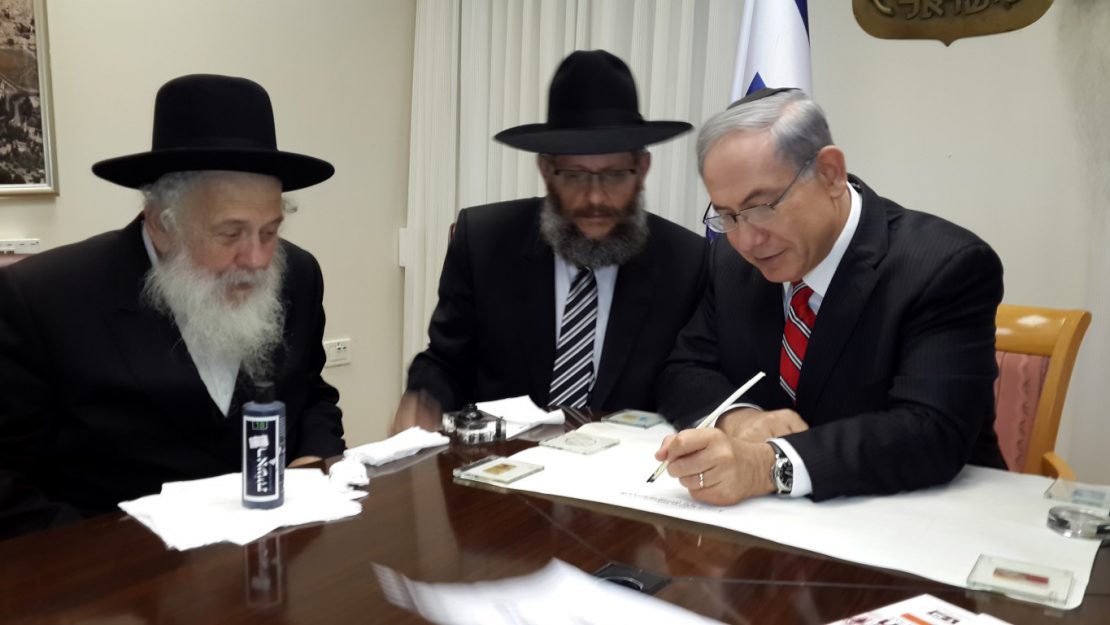 It was an emotional day for the Prime Minister Benjamin Netanyahu this past Wednesday, as he hosted a delegation from Agudas Chasidei Chabad and inscribed a letter in a new Torah Scroll that will be dedicated to the merit of the soldiers of the IDF. The ceremony took place shortly before the PM was to address foreign news correspondents on the Egypt and US mediated 72 hour cease-fire.

“There, I will do again what the Rebbe (Rabbi Menachem M. Schneerson, of righteous memory) told me to do decades ago—to light a small candle in the great darkness of lies that surround us.” The PM told the assembled.

(The cease-fire has since been broken by Hamas, who have fired over 30 rockets at Israel after refusing to continue negotiations).

Rabbi Yosef Yitzchak Aharonov, director of the Chabad Youth Organization in Israel, assisted the PM as he filled in a letter in the first verse of the Torah. He explained that in Jewish tradition, the letters of the Torah have special protective merit.

“We are assured that every soldier for whom a letter has been written in this special Torah will feel a measure of security. In our tradition, the letters of the Torah are especially potent with regards to safety and security, and we felt it incumbent upon us to deploy this spiritual means of security for our troops.”

The PM also received a pair of Tefillin from Rabbi Yisrael Halperin, Chabad emissary  to Herzliya; Rabbi Halperin explained that he had served in the Israeli army under the command of Yoni Netanyahu, the elder brother of the PM, and he had intended on giving him this pair of Tefillin but Yoni tragically fell in combat during the Entebbe operation of 1976.

“Now, I want to finally close the circle and give [you] the tefillin that I wanted to give Yoni,” Halperin told Netanyahu who received the Tefillin with tears in his eyes.

The Torah Scroll for the soldiers is being written by the scribe, Rabbi Mordechai Lishner of Kfar Chabad in Israel