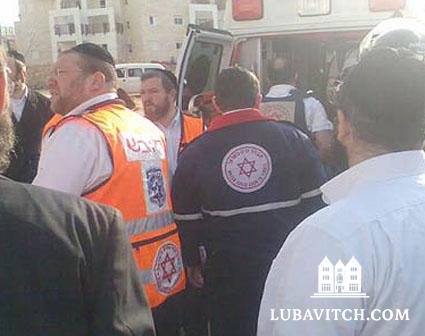 (lubavitch.com) Well beyond the reach of rockets, Israelis throughout the country are on higher alert after several local terrorist attacks including one in which an Arab worker yesterday stabbed his Jewish manager and several other residents in Kiryat Sefer.

On Monday morning an Arab employee with 13 years experience working in the area attacked his manager, Aryeh Deutsch, after they had a conversation about the operations in Gaza. The worker expressed his anger over the events, later taking a sledge hammer and seriously injuring Mr. Deutsch who remains in critical condition in Tel Ha’Shomer hospital outside of Tel Aviv. The worker stabbed three more residents as he dashed out the building and down a path to Rashbi Street, a major thoroughfare in the city.

“There are usually Arab worker everywhere,” said Chabad of Kiryat Sefer Director, Rabbi Mordechai Kenig, who lives in the building next door. “Yesterday they closed down the city entrance for a few hours and residents protested the lack of sufficient security. Today there are very few workers out on the streets. People are concerned. This was a trusted worker of many years from one of the nearby Arab villages.”

Trying to flee the city, the Arab worker hitched a ride towards the city entrance with a local Jewish resident who knew him from his years of local work.

“He told the driver he didn’t feel well and was heading home,” said Rabbi Kenig. “If he made it out of the city he would have easily disappeared into the surrounding Arab villages.”

Rabbi Kenig told Lubavitch.com that the driver stopped a few blocks after picking up the worker to pick up another friend looking for a ride, a member of the local security. Opening the car door, the security member immediately recognized the worker as the suspect who then pulled out his knife. The security officer shot him.

The event follows the IDF’s assumption and warning that as the operation in Gaza  progresses, Palestinians in the West Bank and radical Israeli Arabs would attempt to carry out revenge attacks.

Tonight’s regular evening learning program at the Chabad Center in Kiryat Sefer is dedicated to Mr. Deutsch whose condition remains extremely serious. The event comes on the heels of the opening of a new kindergarten program, Gan Rivka, in memory of Rivka Holtzberg, the Chabad emissary murdered in the terrorist attacks in Mumbai a month ago.