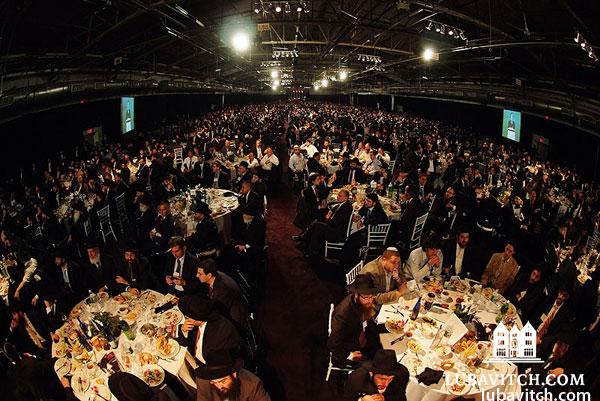 A view of the banquet session at last year’s conference. Photo: Israel Bardugo for lubavitch.com

(lubavitch.com) Rabbi Shlomo Silverman is the new campus rabbi at Carnegie Mellon University. He and his wife arrived in late July, a mere few weeks before the new academic year began. With several successful student programs up and running already, the young Chabad representative is bursting with energy to do more.

Silverman will be joined by thousands of Shluchim and community activists at the International Conference of Shluchim—the largest global gathering of Jewish leadership with representation of Chabad Shluchim and lay leaders from 73 countries.

The Conference, which begins November 19th at Lubavitch Headquarters in New York will pack six days of seminars, lectures, workshops and informal sessions designed to address the challenges and the opportunities of the new year.

“This is the 25th year of the Conference, a milestone in its own right,” says Rabbi Yehuda Krinsky, Conference Chairman and Chairman of the Lubavitch educational and social services divisions. The Conference, he says, “is empowering to our Shluchim—the largest representation of Jewish communities and Jewish life at this time in our history, and will reflect the determination for continued growth despite the economic crisis.”

The economic bust is indeed a big issue for many Shluchim whose constituents are hurting and will be addressed from a spiritual perspective as well.

“People turn to Shluchim in good times and bad,” says Rabbi Daniel Moscowitz, director of Chabad of Illinois. “Now with so many people concerned about the financial crisis, we want to provide representatives with tools to advise their constituents.” Moscowitz is working with other Conference coordinators arranging sessions on the global economic situation.

But the larger theme of the Conference will seek to translate a lofty idea of Jewish unity into practicable programs that Shluchim can take home and implement in their respective communities.

“With the Jewish calendar year 5769 being The Year of Hakhel, it was natural that this should be this year’s conference theme,” says Merkos Vice Chairman Rabbi Moshe Kotlarsky and Chairman of the Conference Committee. Hakhel refers to a Biblical injunction for the Jewish people to assemble once every eight years as a unified body.

“The Hakhel year and the Hakhel theme were dear to the Rebbe’s heart,” explains Rabbi Kotlarsky. “His love for Jewish people and the unity of our people were exemplified in his life and define the work of Shluchim, which will be reflected in this year’s Conference.”

In many ways, the Conference is itself is a microcosm of the “hakhel” gatherings in Jerusalem of yore, where Shluchim work to build upon “what unites us as Jews across the board, not what divides us,” explains Rabbi Efraim Mintz, a conference organizer.

“These representatives are in a unique position to facilitate the concept of Hakhel on both community and global levels,” with a host of and initiatives that will be introduced at the conference that will encourage collective, community activism.

Rabbi Moshe Bryski of Chabad of the Conejo, will speak to the theme in his keynote address at the banquet session.

Guest speaker of the Conference, Yehuda Avner, the Israeli diplomat and ambassador who served five of the State’s prime ministers including Levi Eshkol, and enjoyed personal interaction with the Lubavitcher Rebbe, will reflect on his relationship with the Rebbe—always fascinating to Shluchim, especially the younger generation that had little or no opportunity to see the Rebbe.

Remarkable to any observer at the Conference is the reciprocal respect and synergy of the senior and younger generations of Shluchim. Rabbi Yehuda Weg, director of Chabad of Oklahoma says, “The younger Rabbis have tremendous respect for the older shluchim who received their inspiration directly from the Rebbe. The older representatives are motivated by the dedication and professionalism the youthful shluchim display.”

Rabbi Yosef Plotkin moved to Greensboro, North Carolina two months ago and like Rabbi Silverman, this Conference is to be his first. He plans to gain tips on networking, fundraising, and program development. Plotkin is also looking forward to the social aspect. He is eager to catch up with old friends who are currently serving communities in Oregon, California, Cancun, and Moscow.

Silverman and Plotkin will likely meet in a workshop geared to first-year rabbis or a roundtable discussion on fundraising. Whatever it is, these two leaders and thousands more, will be presented with a smorgasbord of subject matter.

Kaplan is director of Chabad of Maryland. He has attended every one of the 24 previous conventions, and has helped coordinate them for the past 18 years. “That first year there were maybe 35 or 40 shluchim,” Kaplan recalls. “There were no workshops or training sessions for us.” As the years went by and the number of participants increased, the convention has become “more professional and goal-oriented,” he says.

With a guest list of 4,000, the logistics get more complicated each year. “It is a real challenge to find a location in New York where you can host this many people,” admits Rabbi Mendy Kotlarsky who helps coordinate the conference. Some of the programming will move from its regular home at the yeshiva on Eastern Parkway to a large auditorium with 1,200 seats.

The Conference will formally close at the banquet session at Pier 94 in Manhattan. The 111,000 square foot hall is located in a freight pier on the Hudson River. Black and white clad attendees will throng the area and smile at cameras that project their images to family members and supporters watching the event live via the internet.

Like many shluchim who attend, Kaplan finds the banquet “a major focus of the weekend.” It is inspiring, he says, to watch “shluchim and lay leaders sharing their joint success.”

A glance at the countries and cities of origin on the registration applications for the Conference reflect the spectacularly vast dispersion of the Jewish people. As Chabad continues to grow, so does the challenge of its Shluchim who look to the Conference to fire their passion for Jewish life, Jewish unity, Jewish continuity.