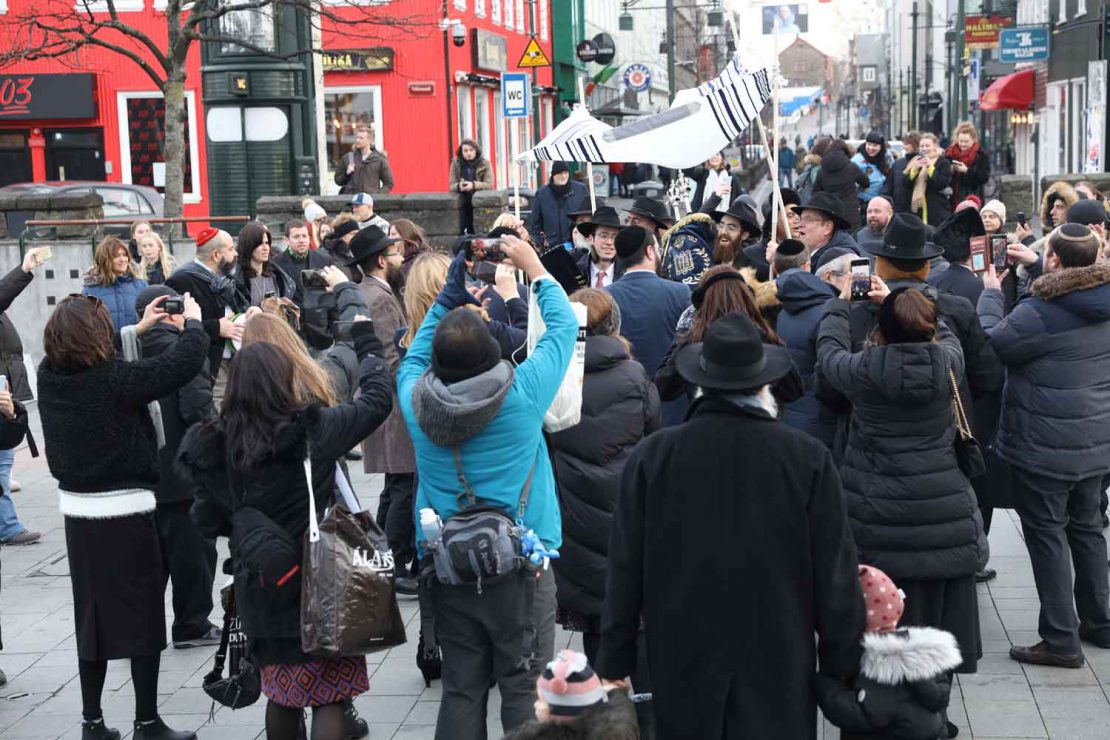 Uri Krauss was turning 50. His wife, Adina was determined to mark the occasion with a memorable surprise—the dedication of a brand new Torah scroll.

But where would such a gift have the maximum impact? Zurich based, Adina began doing research, looking for a community that didn’t have its own scroll. A place where the donation would be used and appreciated.

In 2018 Rabbi Avi and Mushky Feldman established Iceland’s first permanent Jewish institution when they opened the doors of Chabad of Iceland. The couple borrowed a Torah to use on Shabbat and Jewish holidays.

Adina had found her match, and on Sunday, February 18, a year after the first letters of the Torah were inscribed, the Krauss family and friends joined Chabad of Iceland welcoming their new Torah scroll.

US Ambassador to Iceland, Jeffrey Ross Gunter hosted a kosher reception at the embassy. “This is historic. Congratulations to Rabbi Feldman as he grows the Jewish community of Iceland, contributing to the values that we as Americans all cherish,” said the ambassador, who is Jewish.

After the final letters had been inscribed, the Torah was carried on a musical procession along Laugavegur, Reykjavik’s main street to its new home at Chabad.

“Passersby were enthusiastic about our celebration, and people of all faiths joined the revelry,” Rabbi Avi told  Lubavitch.com. It was, he said, “a momentous occasion in Icelandic and Jewish history.”

Thanks to Adina and Uri, the rabbi noted, Reykjavik now has its own Torah, a vital piece toward completing the city’s Jewish community infrastructure. A Torah scroll contains hundreds of thousands of letters. Each letter must be meticulously formed using quill and ink on a parchment made from the hide of a kosher animal, a process that can take up to twelve months and incur a price tag upwards of $30,000.

Related Articles
View All
Black Fire, White Fire
Although it’s a staple of the synagogue service, the reading of the Torah remains something of a mystery to many. Here’s an up-close look at…
Still a Dollar
In the spring of 1981, the Lubavitcher Rebbe spoke about Jewish unity as an antidote to looming threat of warfare and terror at the time.…
Get Inspiration to your inbox!
Newsletter
Join our weekly newsletter for inspiration and updates
Donate
Find Your Local Chabad Center
Subscribe
|
Log In
Chabad
About Chabad-Lubavitch
About Chabad Lubavitch
The Rebbe
Headquarters
Magazine
Magazine
News
News & Updates
In The Media
Impact
Social and Humanitarian
Social and Humanitarian
Education
Education
Community
Community