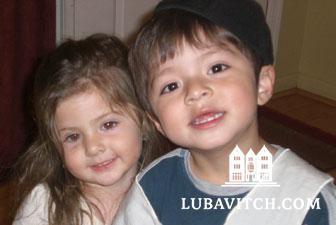 With the numbers of Jewish immigrants from Spanish speaking countries on the rise, Chabad representatives are opening centers that are making them feel comfortably welcome and at home.

(lubavitch.com/LNS) It’s not bagels and lox at La Sinagoga de Jabad de Coral Springs brunch. Here the fare is arepas and cheese pies, a taste of the old country shared by regulars and newcomers at this Spanish Chabad center.

An offshoot of Chabad of Coral Springs, Rabbi Mordechai and Shoshana Lichy lead the Spanish congregation which attracts Jews from Columbia, Venezuela, Ecuador, Argentina, Brazil, Mexico, El Salvador and other points across South and Central America.

Drawn to El Norte for economic and political reasons, Jewish immigrants from Spanish speaking countries are growing. A 2004 study by the Jewish Federation of Greater Miami found that nearly ten thousand, or 10%, of Greater Miami’s Jewish population identified themselves as Hispanic Jews.

A Pew Research Center report released last Tuesday projects that by 2050, the number of Hispanics in the United States is expected to triple, enlarging their slice of the population to 30%. Chabad will be ready for them.

Gusto “Avigdor” Salazar arrived in Florida from Ecuador fifteen years ago. “Spanish people are very friendly. Everyone is close, and that is what makes our Spanish shul a special place,” said Salazar, affectionately known as El Presidente of the Chabad for Spanish Speakers.

Espanol is the language of sermon and shmooze at a growing number of Chabad centers in the United States. In South Florida alone there are services for Spanish speakers in Sunny Isles, Silverlake, Bal Harbour, and Aventura. Along the Mexican-American border, Rabbi Mendel and Nechama Dina Polichenco serve gefilte fish a la veracruzana at their synagogues located in Chula Vista, CA, and Tijuana, Mexico. In other communities, Chabad rabbis are studying Spanish so they can reach and teach their locals in their own language.

These centers offer more than translated prayer books to their congregations. They bring the taste of home that the immigrants crave, and offer guidance over the shoals of culture shock.

Rabbi Mordechai Lichy, an administrator and teacher at Hebrew Academy Lubavitch in Margate, FL, who started La Sinagoga a year ago, is as likely to get calls about finding a good immigration lawyer as he is to counsel married couples and officiate at bar mitzvahs. The Spanish shul is a satellite of Chabad of Coral Springs, directed by Rabbis Yossi Denburg and Avraham Friedman. La Sinagoga, which Rabbi Lichy and his wife Shoshana run as a labor of love, serves as a comfort zone for Spanish speakers, where prayer and Torah classes beget socializing, networking, and job placement.

“We’re just like any family. We come to each other for help,” said Salazar.

Sometimes help comes only after stereotypes are shattered. “It’s a persistent myth that there are no poor Jews from South America,” said Rabbi Shloime Halsband, who directs the California Club Chabad in North Miami Beach. Rabbi Halsband toils to raise funds to feed of 35 families, who fled Argentina’s economic collapse in 2003 and still haven’t gotten on their feet.

With Argentina’s finances on the mend, the streams of people flowing from there into South Florida have tapered off. The need for Spanish synagogues, however, is only increasing.

“People may speak English for business purposes and get by just fine, but to learn spiritual concepts, to discuss matters of the heart, they are much more comfortable in Spanish,” said Rabbi Lichy.

Neshama Salazar of Coral Springs, a relative by marriage of El Presidente, feels it’s positive for the children to hear Spanish on Shabbat. “It helps them keep their culture.”

And there’s bound to be more people seeking the American dream. “Economically and politically, the countries of central and South America are shaky. There will always be people looking for better lives for their children,” said Rabbi Halsband.

Chabad centers are accommodating the needs of their communities as they Americanize. Alexandra Goodwin attends Rabbi Lichy’s synagogue with her American born husband. For the gringos, Rabbi Lichy prepares printouts that provide the gist of his sermons in English.

“My husband claims he can understand enough. He actually feels very comfortable there,” said Mrs. Goodwin.

He likes the emotional quality of the services, she said. Rabbi Lichy concurs. “Passion is visible in everything we do, during the sermons, people cry. We cry. We laugh.”

As the son of Cuban immigrants, Rabbi Lichy has an intuitive grasp of the Latino sensibility. He also has firsthand knowledge of what it means to discover the richness of your Jewish heritage through Chabad. His parents, proud but non-observant Jews, sent young Mordechai to a Chabad elementary school. Rabbi Lichy remembers Rabbi Shalom Lipskar wrapping tefillin on his father’s arm when he was registered for his first day of classes. By fifth grade, Jewish education made its mark on the entire Lichy family, aunts and uncles included.

“That’s how Hispanic families are, we stay together.”

Mrs. Lichy grew up in Venezuela, became observant at age 16, and moved to New York. She longed for the warmth of home, and promised herself she’d share the best parts of her experience with others.

“I know what it is like to not speak the language, and how good it feels to be understood.”