In the Wake of Tragedy, A Call for Unity 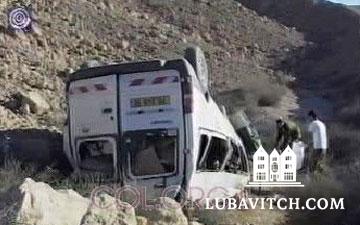 The scene of the accident. Click on image for more photos.

Within Chabad-Lubavitch communities internationally, shock and grief over the deaths of three young Chabad students two weeks ago have now given way to a more introspective focus. Many have issued calls for a concerted effort towards greater achdut, or unity among Chabad chasidim, as they reflect on a tragedy that struck deeply, affecting every segment of the community.

The tragedy and its circumstances, in which the students were killed in a car accident on their way to celebrate Chanukah with Israeli soldiers at an IDF base near Eilat, threw a pall of emotional and spiritual distress among Chabad Chasidim worldwide.

In the faces of the three students plastered on the pages of all the Chabad newspapers and websites, every Lubavitch parent, teacher and mentor saw his own child, his own student. Students were particularly affected, and at many Chabad yeshivahs in Israel, the U.S. and elsewhere, yeshiva principals have called assemblies in an effort to address the gripping sorrow. Many students have dedicated studying segments of Talmud and Chasidic discourses to honor the memory of their peers.

In response to similar tragedies in the past, the Lubavitcher Rebbe, of blessed memory, called for enhanced unity and ahavat yisrael among his chasidim. While unity is an almost natural response in times of crisis, “we should not need to wait for a crisis to come together,” says Rabbi Yehuda Krinsky, Chairman of the Lubavitch educational and social services divisions. Rabbi Krinsky will be travelling to Israel to address a special shloshim gathering to be held on Tuesday, January 16, in Jerusalem. The assembled will also hear from his colleagues in the Rebbe's Secretariat, Rabbi B. Klein and Rabbi L. Groner.

Related Articles
View All
Three Chabad Students Killed in Car Accident
Chabad communities in Israel and beyond are shocked by the loss of three of its students, killed on Wednesday in a car accident. Levi Hendel, 14,…
News Briefs
Walnut Creek Welcomes New Shluchim
Community Welcomes Shluchim With Flowers And Gifts
News Briefs
Remembering The Struggle for Russian Jewry
Ninety-three years ago today, Rabbi Joseph I. Schneersohn, sixth Lubavitcher Rebbe, was freed from Soviet-imposed exile.
News Briefs
Statement By Chabad Lubavitch World Headquarters
Every day that Jews are barred from entering the synagogue by armed guards is an unforgivable violation of the Jewish people!
News Briefs
IL Governor Rauner Joins Chabad Emissaries in Prayer at Western Wall
Illinois Governor Bruce Rauner was joined by Rabbi Avraham Kagan of Lubavitch Chabad of Illinois on a visit to the Western Wall in Jerusalem Tuesday…
Get Inspiration to your inbox!
Newsletter
Join our weekly newsletter for inspiration and updates
Donate
Find Your Local Chabad Center
Subscribe
|
Log In
Chabad
About Chabad-Lubavitch
About Chabad Lubavitch
The Rebbe
Headquarters
Magazine
Magazine
News
News & Updates
In The Media
Impact
Social and Humanitarian
Social and Humanitarian
Education
Education
Community
Community