In Small Brazilian Neighborhood, One Thousand March With Chabad Rabbi To Tashlich 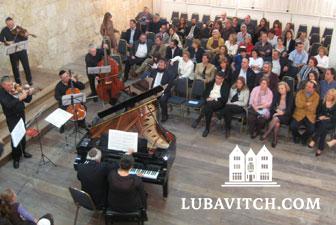 At a pre-Rosh Hashana concert, Rabbi Schildkraut prepares his community to make the most of the Jewish New Year

Home of soccer and Carnival, religion does not usually take center stage in Sao Paulo, Brazil.

But this Rosh Hashana saw of hundreds of Jews participating in a procession with Jewish significance.

Tashlich, a custom peformed by a symbolic gesture, speaks to the idea of Rosh Hashana as a time for seeking forgiveness.

Less popular than apple-dipped-in-honey and other Rosh Hashana traditions, Tashlich is a tradition where Jews walk to a body of water, symbolic of kindness, and following a short prayer, shake the corners of their garments as if casting their sins into the water, while beseeching G-d's forgiveness.

Rabbi Yossi Schildkraut, Chabad emissary in Itaim, an upscale neighborhood in Sao Paulo, has made this ancient ritual resonate with a modern community: a Tashlich procession.

On Thursday, the procession that departed from the Beit Chabad Itaim synagogue numbered 500. By the time it reached the well of water, its numbers swelled to over one  thousand participants.

"People stopped their cars and wished us a happy new year," says Marcelo Stern, a longtime congregant. "Every year we increase our numbers, as publicity about the march spreads ."

In an inspiring ceremony, Rabbi Schildkraut sounds the shofar and addresses the tashlich-goers.

"I feel cleansed after the ceremony," says Renata Levy. "It's a tangible expression of the Rosh Hashana mindset of repentance and forgiveness."

Rabbi Schildkraut conceived the idea fourteen years ago in a casual conversation with shul member Jack Terpins, president of the Hebraica, the most exclusive and elegant Jewish club in Sao Paulo. "He jokingly asked me what Jewish purpose could be created for a well that he had recently discovered on the sprawling grounds of the club," said Rabbi Schildkraut.

Tashlich was the first thing that sprang to my mind and a the idea took off.

"My father was a Chabad shliach in New Haven, Connecticut, but his custom was to spend Rosh Hashana in Brooklyn, with the Lubavitcher Rebbe,” says Rabbi Schildkraut.

In 1957, with Yossi due to be born just around Rosh Hashana, his dad remained in New Haven for Rosh Hashana.

If he couldn't join the Tashlich march with the Rebbe in New York, the elder Rabbi Schildkraut would create his own procession in New Haven.

"So my father pulled Jewish people off the streets on Rosh Hashana and marched with them to Tashlich."

Apart from the value of the custom itself, explains Rabbi Schildkraut, "the sight of Jewish people marching together raises awareness about Rosh Hashana."

The Tashlich walk is only one of the many creative programs the Schildkrauts employ to raise Jewish awareness. When they established their Chabad House twenty four years ago, most of the 7,000 Jewish residents in Itaim had never seen the inside of a synagogue, and their congregants numbered a mere four members.

Last week, the beautiful Chabad House barely contained the 1300 people who attended Rosh Hashana services. Congregant Ricardo Shulman attributes the incredible growth of the community to the vibrant warmth and charisma of the Schildkrauts.

“Rabbi Yossi and Chaya Schildkraut have created far more than a community; they have created one large family.”

With many of the inspired Tashlich walkers planning to join Chabad of Itaim for the Yom Kippur services, the Schildkraut family continues to grow.