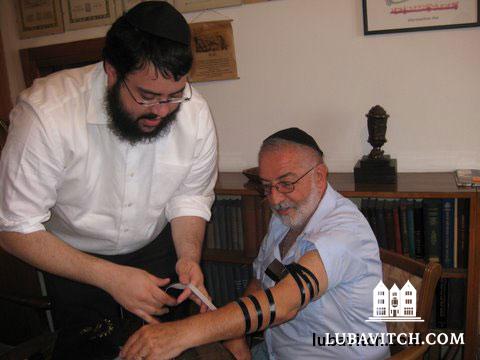 (lubavitch.com) Bosnian and Serbian Jews see the war crimes trial of former president Radoyan Karadzic, which continues in The Hague this Friday, as a sign their country is moving on toward a more stable future. If only that was the case for war weary Jewish communities in the Balkan region.

Zalman Bendet of S. Paul, MN, and Laizer Labkowsky of Los Angeles, rabbinical students on summer internships were assigned to Bosnia and Serbia this summer, by Merkos, the Chabad-Lubavitch educational division.

They found Jewish communities that were proud of their past, well organized, but dwindling in numbers due to intermarriage and assimilation. Many Jews they met during their travels expressed hope that eventual inclusion in the European Union would bring them into contact with larger Jewish communities, and give their children a reason to pursue Jewish continuity.

That’s a long way off, so Bendet and Labkowsky traveled to outlying Jewish communities of the two countries to answer questions, teach classes and give the Jews of Bosnia and Serbia hope.

“No transformation happens over night,” Bendet, 24, told the forty people who gathered for Shabbat dinner on Friday night in Subotica, Serbia. “Your country is taking a lot of time to transform, but it is always progressing. Spiritually, too, it is important to be moving and growing on a constant basis.”

Only weeks before the two rabbis had a close brush with the unrest that is accompanying the country’s transformation. The night Karadzic was arrested, Bendet and Labkowsky were walking through a city square in Novi Sad, getting their bearings after a day of driving alongside motorists that make New York cabbies look like Miss Manners. As they passed a group of protesters, a rowdy college student threw a cigarette lighter at the two, a rock and glass bottle followed.

Not wanting to be the victims of emotions unleashed by Karadzic’s arrest, the rabbis headed indoors. Over the rest of the trip, the locals they encountered were looking beyond the headlines to what the arrest might mean to day-to-day life.

“We have begun to get back to our lives.” They told the young rabbis. “War forces us to put our lives on pause. There is no stability, no consistency.”

This year there have been other signs that region is closing in on normalcy. Serbia’s representatives signed a Stabilization and Association Agreement with the European Union in April of this year, a step toward joining the EU upon its ratification by the parliament. Jewish citizens of Israel have seen great economic promise in Serbia and Bosnia’s new openness, and have pushed the Jewish population numbers up in Belgrade. A Chabad representative moved from Israel to Belgrade right before the summer to assist the new Israeli population.

David Fisher, 18, his hair a dread locked paean to his hero Bob Marley, expects to visit Israel next summer. A resident of Belgrade, Fisher will be traveling to Israel  – with Jewish reggae playing in his ear – thanks to a trip organized by the local Jewish community.

Organized communal life is very strong for a region that saw its Jewish population plummet from 76,000 in 1939 to 16,000 post-decimation in the Holocaust and then tailspin down to 2,500 today. With the support of the American Joint Distribution Committee, even cities with very small Jewish populations have a community president and a place for the community to gather – an office suite, a rented apartment.

Throughout their stay in the region, Labkowsky and Bendet organized Jewish classes and lectures at these far flung community centers. Though their visit coincided with the time most Serbians and Bosnians pack up for seaside resorts, those still in town, from Nis to Zrenjanin, showed up to ask questions, from basic: “What is kosher and why are there restrictions?” to wrenching: “Why do people hate Jews?”

Many of the same questions flowed from Subotica’s Jewish community on Friday night. Their weekly Sabbath gathering shows just how many changes the city’s Jews have endured. Today, their community center is a small rented space, adjacent to the former synagogue, an imposing Art Nouveau building with a gold leaf and cobalt blue cupola and seating for 1000.

During services and the collation afterward, they sat on heavy wooden pews before a masterfully carved Torah ark, both appearing too massive for the small space because they are. They are remnants of the synagogue’s original furniture, and the building itself is too vast, too much in need of restoration to be used on a weekly basis.

In Zrenjanin, former community president Lidja Petrovic described in great detail the beauty of the city’s old synagogue that was demolished by the Nazis in 1941. Today the community meets in an apartment house.

Tefillin in hand, Labkowsky approached a prominent member of the Jewish community in Sombor.  “Would you like to put on tefillin?”

He meant that he is not a Jew in accordance with Jewish law. It was an uncomfortable accounting the roving rabbis encountered throughout their trip. At every meeting with a community’s president the dual population numbers were given. There might have been 600 people who join the Jewish community but only 200 are Jewish according to the Jewish legal definition.

“It’s sad to see how many Jews have assimilated, but the youths we met who are Jewish are very interested in learning more about Judaism,” said Labkowsky. “They know they are different, and they are proud of it.”