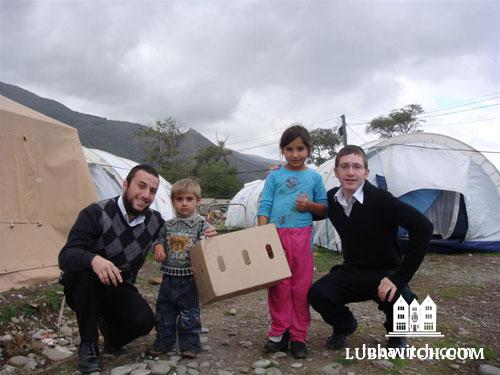 Chabad rabbinical students with some of Gori’s young refugees.

(lubavitch.com) Tensions continue to flare up between Georgia and Russia, with Gori still a city in shambles where many wait in refugee camps for Red Cross food drop-offs, and bombed houses color the landscape.

All the more reason for Georgia’s Chabad-Lubavitch representatives in Tbilisi, Rabbi Meir and Tzipora Kozlovsky, to arrange for rabbinical students to come to Gori and its neighboring towns and cities, so that the area's Jews would have the opportunity to get the Jewish New Year off to a good start, with the kind of Rosh Hashana and Yom Kippur services that would inspire and uplift them.

Arriving in time for the High Holidays, the four students were greeted by government officials, local media and Jewish community members.

Few believed that they would get much of a crowd, but the old Gori synagogue filled up quickly, beyond all expectations.

“People were stunned that we would come to their city, and they were enormously grateful,” said Chaim Serchuk, one of the rabbinical students.

The rabbinical students led the prayers in a creative combination of Sephardic and Ashkenazik styles. “The singing resonated with such soaring inspiration, even those who were not familiar with the services were visibly moved,” he says.

The liturgy was executed in a pastiche of melodies, as community members were invited to lead different segments in their own traditions.

As they departed for Tiblisi, the rabbinical students were showered with thanks by the local Jewish agency representative and the Jewish community leader.

Their itinerary was sponsored by Rabbi Shlomo Duchman and Rabbi Mendy Blau of Colel Chabad, which also provided kosher food staples for the holiday meals.