In Denmark, Chabad-Lubavitch Draws Assimilated Jews Back In 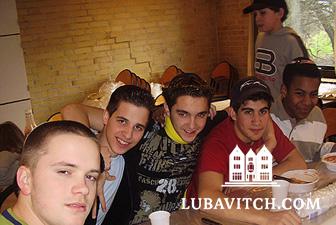 A young generation of Danish Jews get comfortable with their Judaism.
Photo Credit: OLYMPUS DIGITAL CAMERA

Of the 30 children who will be attending Chabad of Copenhagen’s Vinter Lejr, winter overnight camp, a good many will arrive a day late, after December 24, because their parents want them home for the holiday.

Working with children who have non-Jewish fathers is nothing new for Chabad representatives. It’s bumping up the value these children attach to their Judaism that’s especially challenging in Denmark.

Ever since Jews were admitted into the country in the 1600’s, blending in was the norm, a mentality reinforced during the Holocaust, when the intermarriage rate in Denmark was already high. Many attribute the Danes’s decision to rescue Jewish during the Holocaust to the feeling that they were outwardly indistinguishable from the general population.

“Few Danes thought of Jews as anything else but Danish citizens,” Herbert Pundik, a former editor-in-chief of the Danish newspaper Politken, said in a lecture commemorating the rescue’s 50th anniversary.

“The challenge is to explain that Judaism is not a contradiction to Danish life,” said Rabbi Yitzchok Loewenthal, Chabad’s representative in Copenhagen, home to 7,000 Jews. “The Danish system is a framework for feeling good, being happy. For Jewish families, Judaism and Torah is the content that fits into the framework to make life meaningful.”

This year’s lighting of a giant menorah will take place at the Hans Christian Andersen Castle—a measure of how far the Jewish community has come. Several years back, a Danish journalist searched among Copenhagen’s 7,000 Jews for a family that was willing to go on record about their choice to celebrate the Jewish festival exclusively. He didn’t find many takers and ended up interviewing Rabbi Loewenthal and his wife Rochel.

“The journalist and photographer wanted to know if our children felt left out because everyone was gathering with their families on that night,” said Rabbi Loewenthal. “They were surprised to find out that we gather in that way every week, for Shabbat.”

For the past ten years, the Loewenthals have been inviting Danish Jews to share Shabbat meals with them, exposing them to what they’ve been missing. Last month, the Loewenthals hosted a “Shabbat 101” meal and 110 Jewish teens participated. Two weeks afterward, 80 guests, parents and children from their seven-year-old daughter’s class, came for a Shabbat meal. “Shabbat Gymnasium,” held the week after that, is not an acrobatic meal, but one for teens ages 16-19 attending gymnasium, high school.

“All programs present Judaism in an authentic way, not as a tradition that you keep because your grandparents did, but because Judaism is an opportunity to connect to G-d,” said Rabbi Loewenthal.

When all this activity makes its mark, and families begin to take on more of a Jewish lifestyle, they discover gaps in Denmark’s resources. Outside of Chabad’s catering, there are no kosher restaurants in Denmark and kosher meat must be flown in. Jewish education ends at the elementary school level. Rabbi Loewenthal is proud to say he and his wife will be visiting 30 former community members now living in Israel.

Among those who do not make the leap to Israel, many have begun to walk taller through the streets of wonderful, wonderful Copenhagen as Jews.