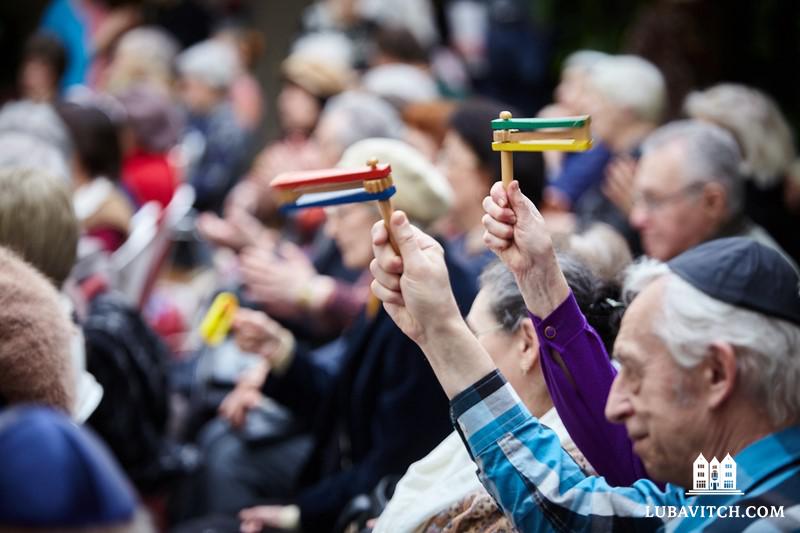 Thousands of people took part in more than a hundred different events that were held in Moscow over Purim this year, including events and Megillah readings held in synagogues, Chabad houses, educational institutions, and various prisons around Moscow.

Major programs were held at the Jewish Center and the Central Synagogue Marina Roscha, headed by Russia’s Chief Rabbi Berel Lazar. The synagogue hosted hourly Megillah readings and a lavish holiday meal which was open to all. Singer Rabbi Pini Einhorn performed at the shul along with the Yachad choir and orchestra, enrapturing the the crowd with celebratory music and dancing.

The highlight of the year was a huge event for 2,500 children at the grand Moscow Circus, which opened with a Megillah reading and a Torah thought by Rabbi Lazar and continued with a fun Jewish program and Purim circus performances.

Special Purim events were also held at the Jewish Chessed Center at Shaare Zedek, which was attended by hundreds of sick and elderly individuals who participated in Megillah readings, received mishloach manot gift packages, and enjoyed a festive holiday meal.

Related Articles
View All
Overview: Chanukah 5777 in Moscow, Russia
For Russia’s Jews, the Chanukah holiday, its lights and message of religious freedom and the triumph of good over evil has particular resonance. Here are…
From Heartbreak to Hope
More than 700,000 children live in state-run institutions in Russia and Ukraine. Many go to bed hungry, never see the inside of a classroom and…
Get Inspiration to your inbox!
Newsletter
Join our weekly newsletter for inspiration and updates
Donate
Find Your Local Chabad Center
Subscribe
|
Log In
Chabad
About Chabad-Lubavitch
About Chabad Lubavitch
The Rebbe
Headquarters
Magazine
Magazine
News
News & Updates
In The Media
Impact
Social and Humanitarian
Social and Humanitarian
Education
Education
Community
Community