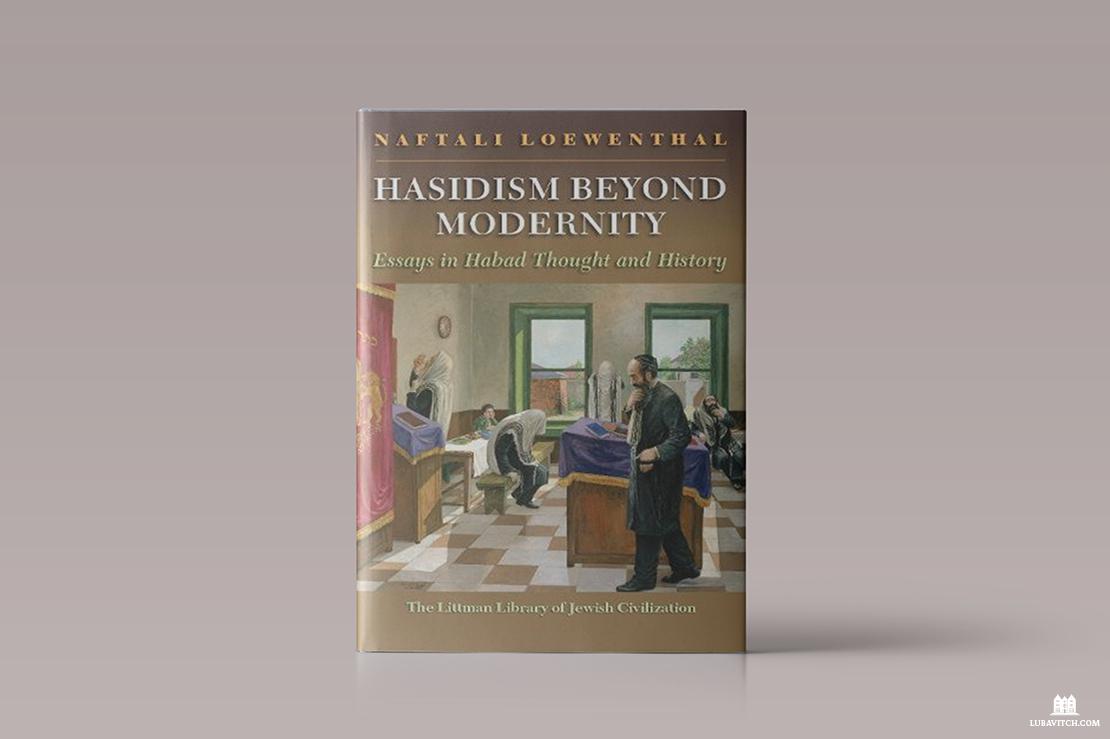 Hippy In the Mikvah

Hasidism Beyond Modernity: Essays in Habad Thought and History

If everyone has a story, an academic is someone who can spend a lifetime refining and retelling the same story, honing its details, sharpening its message. In this groundbreaking book, Professor Naftali Loewenthal, a lecturer in Jewish studies at University College London, asks us to consider Chabad through the lens of postmodernism, thereby gaining a fresh perspective on its development as a movement.

At this point, it would be fair to ask what Loewenthal means by postmodernism. If classical thinking consists of constructing meaningful, distinct categories as a means of describing life and modern thinking consists of deconstructing those categories as false and inadequate, postmodern thinking rejects the either-or forced choice of traditional vs. modern, replacing it with an “and-also” frame. Loewenthal describes this as a feminine mode of thinking, an ability to synthesize and reconcile opposites rather than being forced to choose between them.

In the book’s introduction, Loewenthal describes his own journey with postmodernism. His maternal grandparents were of Polish Chasidic background, while his father’s family was from Frankfurt; as he puts it—the tug between the Yiddish and German Jewish cultures. Over time, while exploring the varied and rich perspectives of Jewish thinking, he came to embrace traditional Jewish observance. But that presented a conflict for him: as an academic, he was free to think critically about Jewish studies, while as an observant and believing Jew, he might feel constrained as to what he could write in good conscience. He considered leaving the field entirely. In a private audience with the Rebbe, he presented his quandary: should he continue working on a degree in Jewish studies or pursue another career pathway?

“The Rebbe encouraged me to continue with the doctorate. I blurted out, ‘But what about the heresy?’ The Rebbe answered: ‘You should write all the footnotes you need to write. And then’—with a broad smile—’you should do teshuvah’” (p. 15).

Here, the Rebbe affirmed the value of his honest academic exploration—a critical analysis with no foregone conclusions—while also asserting that it was possible for him to remain faithful to his principles and loyal to his beliefs and his community. Similarly, Loewenthal’s wife, Kate, was encouraged to continue with her academic career as a lecturer in psychology while raising a Chasidic family.

Loewenthal’s ability to navigate contradiction perhaps makes him uniquely suited to see how seemingly conflicting values within Jewish and Chasidic life can co-exist in dynamic tension and even flourish as a result.

Hippy in the Mikvah

Loewenthal begins building the case for considering Chabad as a postmodern, rather than a traditional, community by looking at Chabad’s embrace of the non-observant. On the one hand, as in all Chasidic groups, there is a great emphasis on traditional adherence to Jewish practice. At the same time, in stark contrast to other communities, Chabad Chasidim did not try to maintain their authenticity by cutting themselves off from those who do not think of themselves as “orthodox.” On the contrary, Chabad leaders emphasize that every Jew is holy and that even one mitzvah, on the part of any Jew, could tip the balance of the world toward redemption.

Loewenthal highlights the tension this attitude creates by sharing an anecdote about a Chabadnik who befriended a young Jewish spiritual seeker, inviting him to immerse in the local mikvah. A Vizhnitz Chasid, who was a member of the Stamford Hill community, expressed discomfort at the thought that his son might encounter someone with a ponytail and tattoos in the mikvah, particularly since this young man might frame the experience in terms of similar practices he had experimented with in India. Was not a mikvah meant to be a sequestered bastion for Jews seeking a higher measure of holiness and spirituality? Yet, to the Chabadnik, the hippy-in-the-mikvah was the ultimate expression of Judaism’s accessibility—every Jew could immerse themselves in the experience of spiritual purification. Over time, this thinking has come to pervade the Orthodox world, with outreach slowly becoming accepted as a community norm.

Another theme that Loewenthal traces is the development of the role of women within Chabad. Traditionally, formal education for women was frowned upon in both the Chasidic and larger Orthodox worlds, though there were always exceptional women who were knowledgeable. Jewish schools for women emerged only in the early twentieth century, in large part as a response to the Haskalah (Jewish Enlightenment), which threatened to destroy the fabric of Orthodox society.

Sara Schenirer’s Beis Ya’akov movement in Poland, founded in 1917, was the first widespread system of formal Jewish education for women. Yet, simultaneously, a parallel movement was occurring within Chabad, which was perhaps even more radical. The sixth Rebbe, Rabbi Yosef Yitzchak Schneersohn, and his successor, the Rebbe, promoted women’s overt participation in Torah study and their activism within the Jewish community. Strikingly, this included the study of Chassidic texts—and even the Talmud, both long considered exclusively male bastions. In other words, Chabad women were educated to be, not only supportive wives and devoted mothers who would uphold the traditional home, but full participants, actively engaging and encouraging their family in every aspect of Chasidic life, bolstered by their personal relationship with the Rebbe and their own knowledge of Torah.

Indeed, Rabbi Yosef Yitzchak stated in the name of his grandfather (who lived 1833-1882), that in the study of authentic Chabad Chasidism, “there is no difference between a son and a daughter.” Loewenthal provides a fascinating account of a young women’s study group founded in 1937, in Riga, called “Ahot Hatemimim.” In many ways, its curriculum paralleled that of Tomchei Temimim, the Chabad yeshiva, founded by Rabbi Yosef Yitzchak’s father. The rigor of the demands upon the young women—both in terms of intellectual sophistication as well as communal leadership and responsibility—were astounding for its time:

“The members of the Riga Ahot Hatemimim group were expected not only to study but to spread Hasidic ideals and other observance of practical commandments. They were given the task of organizing the translation of discourses into Yiddish and their dissemination, as well as of campaigning for the observance of the laws of family purity. Thus spiritual study was combined with practical activism” (p. 290). The Rebbe, on at least one occasion, listened to the students recite a discourse by heart and instructed a young member of the group on a method of spiritual meditation (p. 291).

Unfortunately, most of these students died in the war, and the ambitious Ahot Hatemimim study regimen never took root in the same way in America. Still, we see that women’s familiarity with Chassidic texts continued to grow over time, and their role in shlichut—Chabad’s outreach work—evolved, so that they were not simply serving in a role that supported the work of their husbands, but, with the encouragement of the Rebbe, came to view themselves as activists in their own right.

The Postmodern Faces the Future

Perhaps most boldly, Loewenthal addresses the issue of Chabad messianism head-on: its evolution, the ensuing confusion, and a suggested resolution. The last years of the Rebbe’s life were marked with an ever more overt effort to prepare the world for the ultimate redemption. Many came to believe that the Rebbe would usher in this era, leading them through this experience as he had led their spiritual growth for more than forty years. There was little consideration of how Chabad might continue without the physical presence of the Rebbe. The thought was simply unthinkable.

Yet the unthinkable happened, creating a conflict that touched the essence of Chasidism itself: the relationship between Rebbe and Chasid. The relationship might continue spiritually, but on a physical, practical level, Chabad Chasidim were forced to become their own leaders. Loewenthal talks movingly and honestly about how Chabad has managed to continue, even grow, since the Rebbe’s passing, despite the fact that no successor has been appointed, noting that the majority of the emissaries today embarked on their mission after the Rebbe’s passing. He ends his discussion with this anecdote:

“In 1994, a few weeks after the passing of Rabbi Menachem Mendel, the chairman of Agudas Chassidei Chabad, Rabbi Avraham Shemtov, visited London. While there he gave an inspiring talk about the future of Habad and its view of the Jewish people, the world, and the messiah to a school assembly in the Lubavitch Senior Girls School. After the talk, two 15-year-old girls were talking. One said; ‘I understand: Moshe Rabenu [Moses our Teacher] died, and the Jews still went into the Land of Israel.’ The other responded, ‘Yes, but they had Yehoshua [Joshua]. We need a Yehoshua.’ The first girl answered: ‘Don’t you understand? We are Yehoshua’” (p. 382).

Make no mistake, this book is not an easy read. As noted in the beginning, this is the synthesis of a lifelong academic program of research with “all the footnotes.” Loewenthal has dug deep into the heart of Chabad’s philosophy (and some discussions were too complex to be referenced in this review). Yet, his work is destined to be more than another dusty tome read only by a select cohort of colleagues in his field. Throughout the book, he maintains his humanity, a personal voice that compromises neither his objectivity nor his convictions. The observations of the scholar are considered side-by-side with the insights of school girls. There is no more moving testament to the challenge and the resilience of a postmodern movement; the prior categories exploded, the either/or thinking rejected, while the nucleus—present since the inception—is retained.

Related Articles
View All
Books
Book Review: Teaching The Teachers
I spoke to an Israeli kindergarten teacher this summer who explained to me how the philosophy of early childhood education has changed. “Today,” she said,…
Books
Book Review: My Story
My Story: Forty-one individuals share their personal encounters with the Rebbe, Published by Jewish Educational Media
Books
Keeping That Daily Appointment with G-d
What these books will do is give you the roadmap to find your own “Mezherich” so that you too can learn how to daven.
Books
Chabad of Berlin Publishes German Prayerbook, Marks Holocaust Remembrance Day
A new German-language siddur makes the Jewish prayer book accessible to modern German speakers.
Get Inspiration to your inbox!
Newsletter
Join our weekly newsletter for inspiration and updates
Donate
Find Your Local Chabad Center
Chabad
About Chabad-Lubavitch
About Chabad Lubavitch
The Rebbe
Headquarters
Magazine
Magazine
News
News & Updates
In The Media
Impact
Social and Humanitarian
Social and Humanitarian
Education
Education
Community
Community