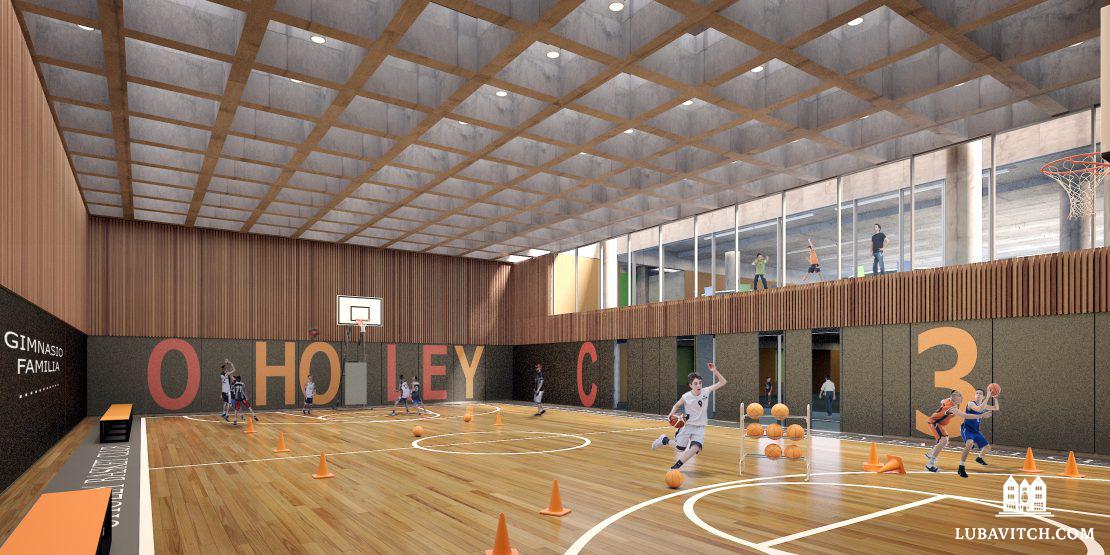 A brisk two blocks’ walk from the Headquarters of Chabad of Argentina, a massive construction project is underway. As Chabad’s nearby Oholey Chinuch Educational Center nearly bursts at the seams, the enormous skeleton of iron rods and concrete coming together in the heart of Buenos Aires is a harbinger of a bright future.

When completed, the twenty-five million dollar Education Center building will contain ample space for nearly two thousand students in its massive 247,570 square feet. A full gymnasium and multiple sports fields will supply much-needed playgrounds and fresh air to the thousands of Jewish children growing up in the dense urban environment of Buenos Aires. “There are very few parks here,” says Rabbi Tzvi Grunblatt, director of Chabad of Argentina. “It’s dense urban apartment buildings in every direction. The children growing up here hardly have space to breathe.”

Perhaps most remarkable is that the building will already be full when it opens. “Each year, we have to add two new classes to our school. In seven years, we’re looking at fourteen entirely new classes,” Rabbi Grunblatt said. “Our current facilities are already operating at maximum capacity, so we desperately need this new space.”

The school began in 1974 with a total of three students. There are now six hundred children enrolled in the elementary school alone, with an additional two hundred in high school and three hundred in kindergarten. Grunblatt says the school’s stellar reputation in the local Jewish community has driven the bulk of its recent growth. Many young families have grown closer to Judaism through Chabad’s outreach programs and are now looking to enrich their children’s Jewish education by enrolling them in Oholey Chinuch.

The first section of the three-part building is slated for completion in March 2023. It will house the boys’ elementary school in a bright and airy facility replete with a cafeteria, playground, gymnasium, and eight divisible classrooms on each floor. There will even be a massive rooftop sports field, providing much-needed recreational space, and an extensive library.

The girl’s elementary school will find a suitable new home in the much larger 170,000 square feet of the campus’s second building, which Grunblatt hopes will be ready in 2025. The structure will also host a kindergarten and, at least at first, the girl’s high school.

The property was acquired in 2005 by two businessmen, Mr. Eduardo Elsztain and Mr. Javier Stolovitzky, after the Jewish school it housed was shuttered due to hard times and a dwindling student body. They were determined to see the building remain in use by the Jewish community and said they chose to donate it to Chabad because “Chabad will be here forever.”

Runaway inflation has stagnated the Argentinian economy, and as the long shadow of the Covid-19 pandemic still casts a pall over the nation, it seems an unusual time to initiate a construction project of this magnitude. The prospect of assembling the necessary funds amidst a recession has prevented most organizations from expanding at this time. Speaking at the symbolic launch of construction, Roberto Goldfarb, a prominent local businessman and owner of the Diarco supermarket chain, was inspired to see Chabad forging ahead with a new initiative despite the circumstances. “It’s been very depressing, watching the economic situation deteriorate here,” he said. “It’s an inspiration to see Chabad display such refreshing confidence about the future.”

Where others saw only cause for dejection, Chabad saw opportunity. Given the devaluation of the Argentine peso, the project is expected to cost only half of the fifty million dollar price tag it was given three years ago.

To Mr. Chaim Lapidus and his sons, Mr. Eduardo and Mrs. Letizia Azar, and the other major supporters coming together to fund the Center’s construction, it’s the groundwork needed to ensure the future of the Jewish community. “It’s not like in America where you have many different educational institutions producing rabbis. If we don’t produce rabbis and teachers here, we won’t have leaders,” says Rabbi Grunblatt.

After receiving generous support from local donors to the tune of eleven million dollars, Chabad is turning to the international community for the remaining costs. Rabbi Grunblatt feels the school is uniquely well-positioned to have an outsized effect on the Spanish-speaking world. “The global community has seen our thousands of graduates go on to reshape not only the face of Argentinian Jewry,” he said, “but also the Jewish community of South America and truly the entire Spanish-speaking world.”