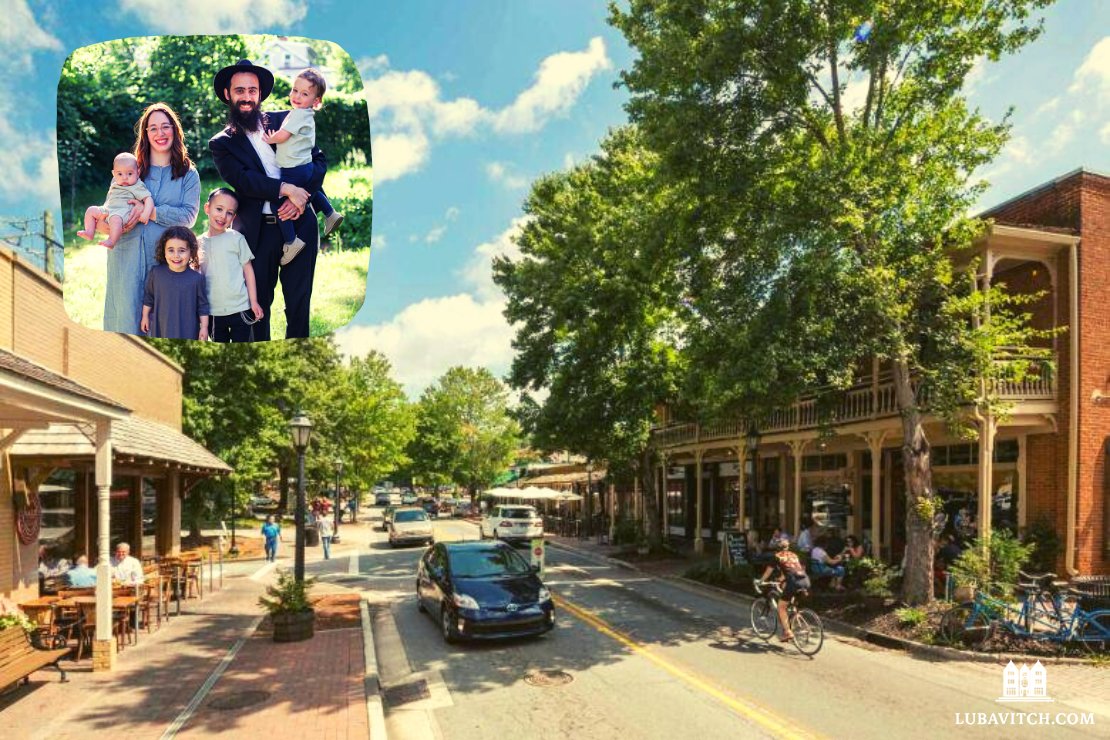 When Rabbi Chaim Schwartz left the University of Georgia to study at a yeshiva in Israel, his family worried that he was gone for good. But now, after years of study and receiving rabbinic ordination, he is returning to his native Roswell, Georgia, together with his wife Menucha, as a Chabad emissary.

Rabbi Chaim grew up just north of Atlanta in a home that was traditional, but didn’t practice all the particulars of a religious Jewish lifestyle. After attending a local high school, he enrolled in the University of Georgia, where he encountered Chabad on Campus and grew to love the Judaism he found there. He followed his newfound passion to Jerusalem, where he spent three years learning Torah at the Mayanot Institute of Jewish Studies, hoping to one day share his passion with others.

Menucha Schwartz spent her formative years near Boston. After her own year of study in Jerusalem, she worked as a student mentor on Mayanot’s Campus for Women, and she discovered her love of teaching. After marrying Chaim in 2016, Menucha pursued a career in education while Chaim continued his studies, first in Crown Heights, Brooklyn, and then in New Haven, Connecticut. All the while, they stayed on the lookout for an opportunity to share their love of Judaism.

“My parents still live in Roswell,” Rabbi Chaim says, “so I noticed that there was plenty of room for Jewish growth in the city.” For years local Chabad emissaries have been servicing the many Jews that live in the booming suburb, but with their centers located elsewhere, there were limits to how much the existing network was able to provide. “Some families there are already in touch with Chabad in neighboring cities,” Rabbi Schwartz says, “but they’re often out of range for Shabbat meals and services.” It was clear a Chabad Center in Roswell would provide a beneficial boost to the Jewish infrastructure.

Once they move into town, the Schwartzes will work alongside Rabbi Hirshy and Devora Leah Minkowicz and Rabbi Ephraim and Chani Silverman, under the leadership of Rabbi Yossi New. They plan to hit the ground running, and start reaching out to old friends and new arrivals alike. “I’m looking forward to having the opportunity to share Judaism,” Rabbi Schwartz says. “Moving back to my hometown after all these years, I feel like I’ve come full circle.”

Related Articles
View All
New Centers
A Jewish Community Life Sprouts in Elk Grove, California
Rabbi Chaim and Raizel Groner moved to Sacramento’s fastest-growing suburb in September to connect local Jews and build the city’s first Jewish community
New Centers
Jewish Community and Culture Comes to Life in Martha’s Vineyard
Ahead of the summer of 2022, the Alperowitzes booked a one-way ticket to the island on the ferry and launched Chabad of Martha’s Vineyard out…
New Centers
Trailblazing Former CTeener to Open Innovative Atlanta CTeen Center
Once a CTeener himself, Dovid Goldschmidt and his wife Talya are opening an innovative CTeen center in Atlanta, GA.
New Centers
Second-Oldest Building in Finland is Chabad’s Newest Center
After two decades of communal growth and half a decade of renovations, and with the help of an old friend from Bogata, Columbia, Chabad of…
Get Inspiration to your inbox!
Newsletter
Join our weekly newsletter for inspiration and updates
Donate
Find Your Local Chabad Center
Subscribe
|
Log In
Chabad
About Chabad-Lubavitch
About Chabad Lubavitch
The Rebbe
Headquarters
Magazine
Magazine
News
News & Updates
In The Media
Impact
Social and Humanitarian
Social and Humanitarian
Education
Education
Community
Community