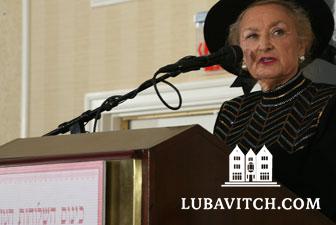 Mrs. Shoshana Cardin greets the Shluchos at the Banquet Dinner.

The sea of 1,000 women in tailored dresses, elegant jewelry and neatly applied make-up didn't look like a crowd of hardcore survivalists.

But there they were last week, convened over a congenial lunch of fish and salad, sharing stories of their survival in remote precincts of the world. The occasion of their gathering was the International Conference of Chabad Shluchos, a meeting of women emissaries of Chabad Lubavitch, which emphasizes reaching out to Jews across the globe to reconnect them to their heritage and culture.

In doing so, they adapt to their varied surroundings while maintaining a Jewish life. Chana Sudakevich described importing frozen kosher meat and long-life milk from Israel three times a year to Japan, where she and her husband run the Chabad House of Tokyo. Luckily for them, she said, it's customary in Japan for guests to bring gifts of fine exotic fruit, which is always kosher, so they often sidestepped the discomfort of being offered non-kosher gifts. Her favorite Japanese custom, she noted, is that of bowing instead of shaking hands upon meeting. As a religious Jewish woman, it means that she doesn’t have to awkwardly face the prohibition against shaking men's hands.

"It's easy for me," said Ms. Sudeakevich, an ivory-skinned mother of four.

Things are considerably more challenging for Chani Lifschitz, who lives with her husband and three children in Kathmandu, Nepal. But she grinned broadly while describing their life in the poor mountainous country where they opened a Chabad House six years ago that famously hosts the largest Passover seder in the world, attended by 2,000 people, mostly young Israeli travelers.

"We do everything like our grandparents did 500 years ago," said Ms. Lifschitz, wearing a bright, flowing skirt and scarf. "We have our own two cows to make cheese and butter. My husband is everything: a shochet, a mohel."

The conference is an annual event that drew 2,057 emissaries from 67 countries this year. It is part United Nations, with women from many countries formally gathering to discuss matters of shared importance. As well, it is also a sprawling, joyful reunion of women who are like an extended family, and seem to be Lubavitch versions of the storied modern superwoman who has it all: marriage, children, fulfilling career and personal satisfaction. The women have many successes to celebrate as they talk about as the schools they've started, the Shabbat meals they host every week, and the programs they run for alienated Jews yearning for a connection to their faith.

It was not only those who lived in far-flung lands, but also hundreds who had come from tiny points scattered across the North American map who seemed like pioneers.

Cheine Lazaroff recalled what it was like when the Lubavitcher rebbe sent her and her husband to open a Chabad House in Houston, Texas 35 years ago.

"When we came to Texas, there were three shomer Shabbos people there," she said, referring to Jews who observe the laws of the Shabbat. "Basically there was very little yiddishkeit. The Jews there were afraid of rednecks. Even people who were shomer Shabbos wouldn't wear yarmulkas in the street. My kids were the first."

Since then, Ms. Lazaroff said, she and her family built a mikveh, a Jewish day school, and established a strict kosher certification that five eateries now abide by. And many Jews feel fine wearing their yarmulkas in public, she added.

Despite the challenges they may sometimes endure, there was hardly a flicker of disappointment in anyone's eyes at the gathering. Instead, they proudly ticked off the countries in which their own children have become emissaries: Australia, Canada, Russia, France, England, Brazil and so on.

Perhaps nobody smiled as broadly as Rochel Pinson. Mrs. Pinson, now in her 80s, grew up in Russia and saw her father, a Lubavitcher Chasid, taken to be shot by Stalin's henchmen in 1938. She came to Paris as a refugee, and when she saw many of her peers immigrating to America, the Rebbe told her and her husband to go to Morocco in 1954, and then to Tunisia in 1960. She has lived in Tunisia ever since, where she raised five children and established a school that, at its height before many Tunisian Jews left the country, had hundreds of students.

"There were difficult moments, but I don't regret it," Mrs. Pinson said. "As long as there are Jewish people there, we'll remain. If today, the Rebbe would challenge us and say you have to go to a faraway place, I would do it."

Related Articles
View All
Women Leaders Convene at International Conference
Hebrew grammarians who examine the theme of this year’s International Conference of Chabad Shluchos, may wonder how the theme, “Shluchaso Shel Adom K’mohu,” which means…
Headquarters
Court Confirms Chabad’s Exclusive Rights To Flagship Synagogue At 770 Eastern Parkway
“Chabad-Lubavitch World Headquarters is gratified by the decision handed down last week by the Civil Court of the City of New York, confirming exclusive rights…
Headquarters
STATEMENT BY CHABAD-LUBAVITCH WORLD HEADQUARTERS
Every day that Jews are barred from entering the synagogue by armed guards is an unforgivable violation of the Jewish people!
Headquarters
Celebrating Radical Change With Chabad-Lubavitch
The banquet dinner, an elaborate, dramatic affair, is in itself no small nod to the challenge of radical transformation:
Headquarters
Hi Resolution: Annual Photo Captures Thousands of Faces
For some photographers, thousands of rabbis standing around the red ‘no standing’ sign outside Lubavitch World Headquarters are a dream; for others, a nightmare.
Get Inspiration to your inbox!
Newsletter
Join our weekly newsletter for inspiration and updates
Donate
Find Your Local Chabad Center
Chabad
About Chabad-Lubavitch
About Chabad Lubavitch
The Rebbe
Headquarters
Magazine
Magazine
News
News & Updates
In The Media
Impact
Social and Humanitarian
Social and Humanitarian
Education
Education
Community
Community