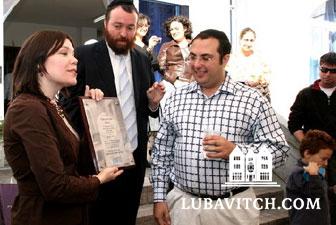 Mrs. Dina Greenberg makes a presentation at the mikvah opening of the Shanghai Jewish Center in China.

The idea of women in leadership positions may seem antithetical to common conceptions of female piety and Torah observant lifestyles. Not so in the world of Chabad. This week, representatives of Jewish communities worldwide–women all–convene at an annual conference.

Hebrew grammarians who examine the theme of this year’s International Conference of Chabad Shluchos, may wonder how the theme, “Shluchaso Shel Adom K’mohu,” which means a messenger is comparable to his master, could be applied to a decidedly female crowd. But it was the Lubavitcher Rebbe, Rabbi Menachem M. Schneerson, an unequivocal proponent of women taking a leadership role in their communities, whose once-revolutionary ideas have shaped an entire generation of Chabad women.

"Shluchos [female emissaries] today do not question their roles as community leaders,” said Chaya Perman, who coordinated convention banquet seating arrangements for the Conference, coming up this weekened, February 7-12. Taking in new reservations as she spoke with Lubavitch.com from Toronto, Perman, a 29-year veteran shlucha [emissary] of Chabad in Caracas, Venuezela, now runs the Friendship Circle. “Many grew up in families where they saw women recognized and respected for their work. Now their sense of empowerment is double-fold, and they are empowered to do a job well beyond their years.”

Among the many superwomen coming to the conference are the eight Alevsky sisters, who will be crossing datelines and continent divides to be together at the convention.

For Dina Greenberg, the fifth Alevsky sister, and her staff at Shanghai Jewish Center, picking up and leaving for a seven-day stay in the States demanded creative juggling. Dina and her husband, Rabbi Shalom Greenberg, run a school, youth group, mikva, Hebrew school, weekly communal Friday night dinners, and much more for Shanghai’s 1800 Jews. Because substitutes capable of taking over Torah classes are in short supply in that part of the world, many of Dina’s staff taped lessons for subs to play in their absence.

Days before leaving, Dina hit Shanghai’s open-air markets to buy Chinese souvenirs for her far-flung family. Actually, far-flung doesn’t quite sum up the worldwide spread of the Alevsky sisters who are community leaders together with their husbands. Sarah Freedman calls Bahia Blanca, Argentina, home. Chanie Glitzenshtein, of Maale Efraim, Israel, wrote a book on the laws and philosophy behind the mitzvah of mikvah. Kaila Sasonkin leads Chabad of Akron, OH. Chabad of Solon, OH, is Miriam Greenberg’s baby.  Estie Marasow’s growing community is in Cleveland. Rochie Sudak recently moved to Washington, D.C. for Chabad work. Youngest sister Rivky Friedman just gave birth and is actively searching for a Chabad position. “Having family all over the world makes thinking about going on shlichus far away from home a lot less scary,” said Rivky. Brothers Rabbi Chaim Baruch Alevsky recently moved to lead Chabad of Plano, TX, and Mendy Alevsky is studying at a Los Angeles, CA, Chabad yeshiva.

Once at the convention, Dina looks forward to absorbing new ideas at some of the 75 workshops delivered by fellow shluchos, especially those that highlight pathways to deal gracefully with the multitasking pressure cookers. Organizers stock workshop panels with eager young shluchos and world-wise veterans to balance creativity with reality checks. Throughout the weekend, they all “bask in the comforting sense of being around other people in the exact same situation,” said Rochel Baila Yaffe, a member of the convention committee and co-director of Chabad of the Shoreline. “It’s the biggest support group around. It’s the shot in the arm that carries you through the year. Breakout groups often brainstorm to meet specific needs. A few years back, Miriam Greenberg, Dina’s immediate older sister, took part in a group project that yielded age-appropriate Passover haggadah booklets to be used in Hebrew schools for children in kindergarten through the seventh grade. Coming back with tangibles like that make it easier for Miriam to justify leaving her Hebrew school, Shabbat youth program, pre-school and children for the weekend, but what makes the convention deeply satisfying is the chance it offers her to see her family. During the convention, the sisters don’t do lunch or get group manicures or pile on double-decker buses for New York sightseeing. “We ‘do’ the whole year through. We just sit and talk,” said Miriam. “That’s the best getaway.”To raise a household of shluchos is not special magic but a result of unyielding focus.

The Rebbe’s message, said Alevskys’ mother Devorah, co-director of Chabad House of Greater Cleveland, “include the whole family in shlichus. There is no describing how the world has benefited from the energy of women who are influential in their communities because they are involved in shlichus.” Mrs. Alevsky’s parents were sent to Cleveland by the Lubavitcher Rebbe to open one of the first Chabad centers in 1963. Mrs. Alevsky is also descended from the legendary Chasidic matriarch Maryasha Garelick, who recently passed away at the age of 106. While her children were young, Mrs. Alevsky and her husband, Rabbi Leibel Alevsky, made the importance of shlichus as a life’s calling a frequent family discussion topic.

But to daughter Kaila Sasonkin, the third Alevsky sister, her parents’ actions spoke louder. The Alevsky home was and is open: guests by the dozens ring the Shabbat table and there’s lots of nonstop action. “My mother was always giving classes, cooking meals for others, organizing amazing programs that were inspiring,” said Kaila. “We got to see it, live it, and feel it. At Chabad of Akron, OH, Kaila’s programs for women are run along the same lines. Women in her community come together bake – and then sell –600 hamentashen pastries for Purim. When a family in the community welcomes a baby, experiences a loss, cares for a hospitalized loved one, Kaila’s not the only one delivering meals; the women’s group prepares and delivers “Mitzvah Meals.”

Ideas like Kaila’s inclusive women’s group will be shared when the shluchos gather this weekend. They will talk and laugh and vent about the joys, trials and outright miracles – how budgets stretch, kids and midnight congregant crises are juggled, and marriages not only survive but thrive under the pressures – of the shlichus life. For many women, their passionate dream is that they will do their job well enough that they too, will get news like the kind Mrs. Alevsky just got from her granddaughter Mushky who lives in Bahia Blanca, Argentina: Mushky, daughter of the eldest Alevsky sister, Sarah Freedman, just turned twelve, and she is already leading a Shabbat group for younger children at her parents’ Chabad house. From generation to generation, said Mrs. Alevsky, “Chabad women are taught, from when they are very young, to be leaders.