Over twenty-one years, Rabbi Yossi and Esty Marcus built a close-knit Jewish community, a successful summer camp, and a prestigious preschool. The $20 million Lent Chabad Center gives them all a permanent home. 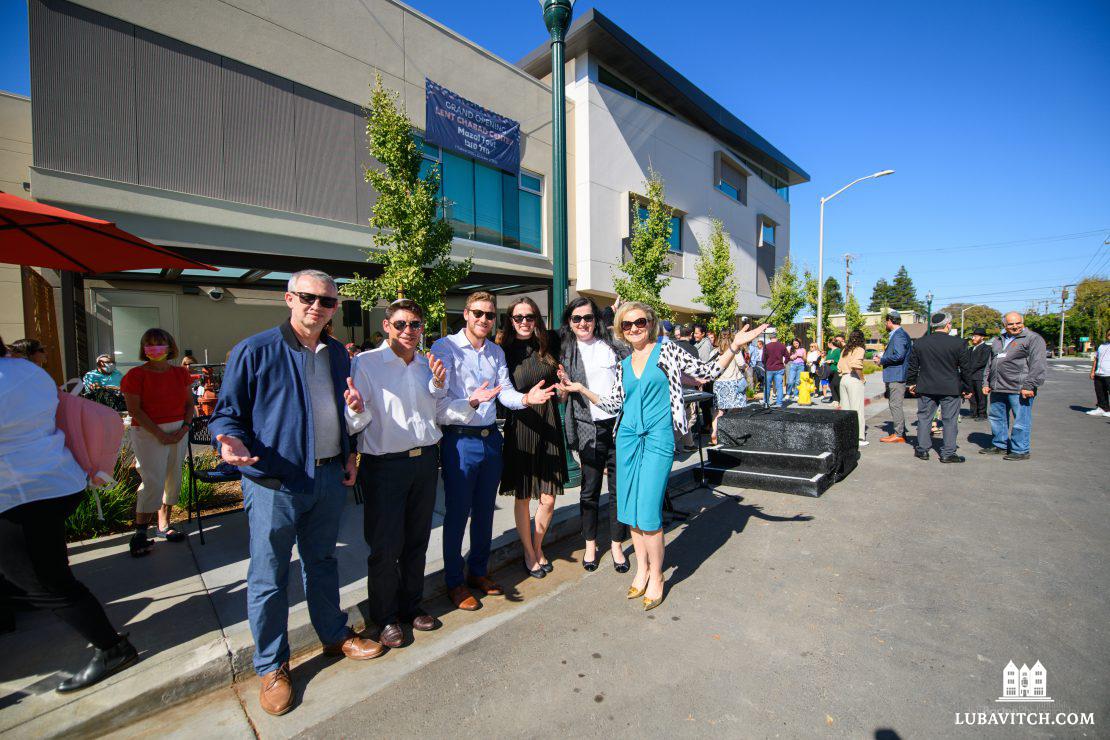 “In the beginning, you have to be creative,” says Rabbi Yossi Marcus. In 2001, he and his wife Esty moved to S. Mateo, California, on the S. Francisco peninsula, and established Chabad of the North Peninsula.

Back then, the Marcuses advertised their inaugural Chanukah menorah lighting ceremony with signs in local supermarkets and celebrated the festival of lights in the Hillsdale Shopping Center with a modest crowd of twenty. But the Marcuses didn’t let the small crowd deter them. Twenty-one years later, on October 2, 2022, they celebrated the grand opening of the $20 million Lent Chabad Center with hundreds of community members.

“We began slowly,” Rabbi Marcus says. One program at a time, they began creating much-needed Jewish infrastructure. Without a permanent synagogue, Rabbi Marcus led Shabbat and holiday services in rented office space and hotel conference rooms. “I used to joke, ‘welcome back to Congregation Marriott,’” he says.

In 2005, Rebbetzin Marcus capitalized on her many years of experience working with Chabad preschools in Port Washington, New York and Redondo Beach, California to launch her own preschool. She was determined to create a truly exceptional program. “We wanted to learn from the best preschools out there,” Rebbetzin Marcus says.

Chabad secured a mentorship from Stanford University’s model Bing Nursery School, and with the support of philanthropists Mr. Bobby and Mrs. Fran Lent, the Chai Preschool was born. Chai’s founding “secret sauce” was a fusion of the famed Reggio method with traditional Jewish influences and a significant emphasis on attracting the most talented teachers. “There were eight kids that first year,” Rebbetzin Marcus says, “but pretty soon, Chai had a waiting list.”

As the preschool took root, it moved from the Marcuses’ living room to rented classrooms, and Chabad’s other activities began to blossom as well. In addition to ever larger Shabbat meals and services, there was the Hebrew school, the Bar and Bat Mitzvah club, and the successful summer camp Gan Izzy. All this without a building.

“By 2010,” Rabbi Marcus says, “it was clear we had a sizable community in need of a permanent home.” Still, the community kept growing, and when in 2014 Rabbi Yale and Rivky Spalter joined the Chabad North Peninsula team to add even more programming to the mix, there was still no building. San Francisco’s red-hot real estate market kept the dream of a community center out of reach.

Finally, Chabad identified an appropriate property in 2016. Mr. Bobby and Fran Lent provided the lead donation that enabled Chabad North Peninsula to purchase three homes on Monte Diablo Ave, just blocks from downtown. Located in the residential area where many in their community lived, the location was perfect. But from demolition to zoning approval, to fundraising and construction, it would be six years before the Lent Chabad Center was complete.

Meanwhile, the community watched the building come together. First, the underground parking lot took shape. Then, they watched the iron beams of the Chabad center’s two stories come together. “Because we built from scratch, the whole community got to feel a part of the process,” Rabbi Marcus says. “When our community finally walked into the completed building, we felt, ‘wow, we built this together.’”

The second floor is home to the synagogue and community center, while the first floor gives the Chai Preschool, dedicated in honor of Eva Chernov Lokey, an attractive home and a state-of-the-art outdoor playground. The new building’s architecture was designed to reflect the Chabad movement’s unique fusion of tradition with modernity. Brass elements exude a sense of antiquity in the synagogue, while a light wooden interior creates a bright and homey feel. “It makes you feel like you’re getting a hug,” Rabbi Marcus says.

For the S. Mateo community, Chabad’s new home represents a new chapter in Jewish continuity. Longtime supporters Jack and Candee Klein dedicated the synagogue sanctuary in honor of Jack’s parents, Asher Lemel and Sedonia Klein, who escaped Nazi Germany in the 1930s. “I’ve always wanted to thank my parents for having the foresight they must’ve had to save our family,” Jack said, “dedicating a synagogue in their memory is symbolic for us.”

At the grand opening on October 2, community member and supporter Mrs. Adrienne Weil pointed to her grandparents and the traditional Jewish values of humility and selflessness they passed on to her. “Chabad’s work, and this center especially, ensure my grandparents’ values will be there for the next generation,” she said, “I’m proud to be a part of it.” The Koum Family Foundation also contributed to the building fund, thanks to Chabad’s work to secure a strong and proud Jewish future.

For longtime Chabad supporters Mrs. Barbi and Mr. Warren Lazarow, the new building heralded a new beginning for the community. “Rebbetzin Esty and I became close friends soon after she arrived,” Barbi said. “Since then, the Marcuses’ drive, belief in their mission, and desire to serve the community has created a strong, welcoming community, and made this magnificent building a reality.”

Rabbi Marcus says the new building marks a new phase for the Chai preschool, the synagogue, and S. Mateo’s Jewish community life. “Chabad has built more than a Jewish community,” Bobby Lent says. “Every Shabbat, I look around and see people of vastly different backgrounds and interests coming together to connect to other Jews and their own Judaism, and I think, ‘this is what family looks like.’”