From Orphan Child to Beaming Bride, A Jewish Wedding in Vilnius 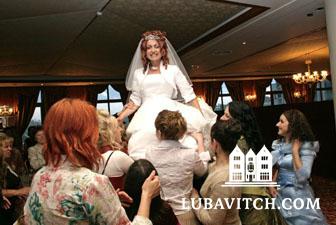 The bride surrounded by her friends

While conflict and tension plague the country’s Jewish leadership, a divided community came together for a chuppah in Vilnius—a rare event in a country with high-intermarriage rates and one Chabad family working tirelessly to rebuild Jewish life one soul at a time.

Without Chabad of Vilnius, the bride would have walked down the aisle alone. Or maybe, she wouldn’t have married Jewish altogether.

Chaya (Luba) Gelemson had every reason to be lonely. She never knew her father. Her mother died when she was a year old. Four summers ago, the grandmother who raised her passed away. If nature had run its course, Chaya, a student at Chabad of Vilnius’s high school, would have become a case number in the State foster care system. But Chabad of Vilnius’s Rabbi Sholom Ber and Nechama Dina Krinsky were not going to let that happen. Then the parents of six children, ages nine and under, the Krinskys opened their home to Chaya and became her guardians.

The Chaya that twirled happily in her flounced white gown and shared quiet looks with Roman Itzkovitch, her groom, is miles from the sad teenager that first crossed the Krinskys’ door. Coming from a home where authority was held in the frail hands of an elderly woman, Chaya was accustomed to staying out past midnight. She balked at the Krinskys’ insistence that she come home earlier or check in if she was going to be late. There were more unsettling discoveries. Unbeknownst to the Krinskys, missionaries had been quite involved in Chaya’s grandmother’s life, adding more confusion to an already complicated situation.

Making Chaya feel at home was quite a handful for the Krinskys. Counseled by mentors, anti-missionary experts, and friends, the Krinskys made very few demands on Chaya. They didn’t push. They didn’t lecture. As the years passed, the Krinskys began noticing small changes in Chaya. Summers at their Camp Gan Israel helped. Close rapport with dorm counselors at the Krinskys’ school opened Chaya still more. Time worked its magic. Chaya’s strengths began to get the upper hand. “After all she’s been through, Chaya could be a bitter person. But she isn’t. She is a special girl. She doesn’t wear a chip on her shoulder,” said Rabbi Krinsky.

Hundreds of miles away, in Israel, Roman Itzkovitch could not have known that the medical school he chose because it was in his native Lithuania would do more than give him career training. Already familiar with Jewish traditions from the years he spent in the United States and Israel, Roman joined a group of Jewish students who spent Shabbat with the Krinskys. About two years or so after Roman’s first Shabbat with Chabad, when Rabbi Krinsky spoke to him about settling down with a nice Jewish girl, Roman worked up the nerve to inquire about Chaya.

After recovering from the “Sunrise, Sunset” shock common to parental figures faced with the prospect of their little girls growing up, the Krinskys saw the logic in the match. A few short months later Roman and Chaya announced their engagement. On a misty Tuesday night, 150 guests – including Chaya’s long lost aunt and cousin who became involved with Chabad through Chaya’s search for family – gathered at the chuppah, marriage canopy, set up near a lake on Le Meridien Villon Resort’s expansive green lawn.

Jew-to-Jew marriages in Lithuania are an endangered species. The Jewish Agency for Israel estimates that 80% of Jews in the former Soviet Union intermarry. The Krinskys have been actively working to counter this trend. Chaya and Roman were the tenth couple to marry as a result of the Krinskys’ inspiration.

Throughout the ceremony, Rabbi Krinsky shared mini-lessons on Jewish wedding rituals with the guests. The explanations, in addition to the dramatic nature of Chaya and Roman’s life story, created an atmosphere where there was “a true outpouring of joy. You could feel it.” As a musician flown in from Israel for the occasion sang classic Jewish wedding songs – with a swinging beat – Chaya pulled Nechama Dina into the middle of the dancing throng for an embrace. Young enough to be Chaya’s sister, Nechama Dina said, “It feels like I’ve married off my daughter.”