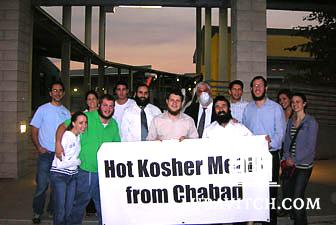 With the overhead roar of DC-10s and Super Scooper planes, and with water helicopters hovering over the swimming pool at Chabad-Lubavitch of Running Springs, Rabbi Yosef Brod can barely hear himself speak.

But he’s turned on the fire hydrant and keeps refilling the pool with water to allow for the choppers to fill their scoopers and dump water on fires licking the perimeter of the 70-acre property situated 14 miles deep into the woods.

“We are in a dangerous situation with fires raging on two sides of our campus and many of the homes in Running Springs destroyed,” Rabbi Brod, Chabad representative to Running Springs says.

And yet he refused to evacuate when he was advised to do so Monday night. “This is a holy place,” he told the fire department, “and I’m not leaving.”

When fire-fighters from LA and San Gabriel drove up to Chabad of Running Springs in search of a place to use as a base, they couldn’t have been more grateful for Rabbi Brod’s defiance of their recommendations the night before.

“Had Rabbi Brod evacuated last night,” Rabbi Shlomo Cunin, head Chabad representative to the State of California, told Lubavitch.com, “they would not have had this fantastic place to use and to refresh.”  Firefighters have been drawing thousands of gallons of water from the site's private water 120,000 gallon water reserves.

The wooded property sitting six and a half thousand feet above sea level, is used as a retreat by Chabad of California and has now been formally opened to firefighters and relief personnel working to combat the wildfires.

“We’ll accommodate even hundreds of  firefighters with food and showers and a place to rest,” says Brod, explaining that because of plans to host university students this weekend, “our refrigerators are stocked with food.”

Private generators, a separate waste treatment plant, and 15 private fire hydrants make this not only an ideal base for firefighters, but also useful to them in their efforts to combat the flames.

It’s a convergence of just those kind of details that makes Rabbi Cunin applaud the hand of G-d, and the blessings of the Rebbe.

“Not a single one of San Diego’s 15 Chabad Houses has been damaged,” says Rabbi Cunin. Though all but one of them have been evacuated, “our Shluchim are fully engaged in counseling and relief efforts, with our trucks delivering food and other forms of assistance to people in need.”

“It’s not a coincidence,” exclaims Rabbi Cunin, “that our facility in Running Springs is named the Panikoff Center of Love and Kindness.”

Related Articles
View All
Chabad-Lubavitch Provides Shelter to Evacuees of California Wildfires
As the wildfires burning out of control in Southern California forced all of San Diego County's 250,000 residents to evacuate, Chabad-Lubavitch representatives there mobilized immediately.…
Features
Remembering The Struggle for Russian Jewry
Ninety-three years ago today, Rabbi Joseph I. Schneersohn, sixth Lubavitcher Rebbe, was freed from Soviet-imposed exile.
Features
Wordsmith: Tamim
The tamim is unflappable. He does not sway with the winds of change, nor bend to meet the expectations of others. He is a simple…
Features
Remembering Rebbetzin Chana: Jewish Feminine Role Model
Rebbetzin Chana Schneerson, a feminine role model of Jewish activism and proponent of Jewish scholarship, mother of the Lubavitcher Rebbe and wife of Rabbi Levi…
Features
Defying Religious Stereotypes on Israel’s College Campuses
By the time Zehavit Mohager, a psychology student, began her studies at the University of Haifa at age 23, she had already completed her army…
Get Inspiration to your inbox!
Newsletter
Join our weekly newsletter for inspiration and updates
Donate
Find Your Local Chabad Center
Chabad
About Chabad-Lubavitch
About Chabad Lubavitch
The Rebbe
Headquarters
Magazine
Magazine
News
News & Updates
In The Media
Impact
Social and Humanitarian
Social and Humanitarian
Education
Education
Community
Community