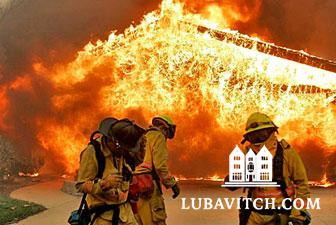 As the wildfires burning out of control in Southern California forced all of San Diego County's 250,000 residents to evacuate, Chabad-Lubavitch representatives there mobilized immediately.

Removing the Torah scrolls, backing up their computer files, and printing out community member lists, the Shluchim at 15 Chabad centers in the city lost no time ensuring that every individual or family appearing on their lists, were accounted for.

Four centers were designated shelters with information posted on Chabad San Diego's websites for anyone needing help. The designated relief centers are: Chabad of Montezuma, Chabad of Downtown, Chabad on Island and 3rd, and until early Monday morning, Chabad of Poway, each of which made food, lodging and any necessary provisions and help available to locals.

Many had no idea how bad the situation had become.  “They thought I was coming to fetch them for morning services,” he said.

“We made sure that every single member was accounted for and delivered to a safe place.”

It is the driest year on record for Southern California, with rainfall just a fifth of average levels. As of now, fire fighters are waiting anxiously for the winds to die down so they can bring the fires under control.

“When they left, they saw the flames advancing, and many are frantic that their homes were destroyed,” he says. “They are desperate to know what has happened to their homes.

It was the same at each of the 15 Chabad Centers serving San Diego’s Jewish community of about 100,000.

Rabbi Levi Raskin, Chabad representative to Rancho Santa Fe was working the phones out of the Chabad center of Downtown San Diego—now a shelter, when Lubavitch.com caught up with him. “I just want to make sure that each of the people in my community are ok, and know that they can contact us here for help.

Rabbi Yonah Fradkin knows the drill. Only four years ago this month, the Chabad Hebrew Academy in Scripps Ranch was destroyed by similar wildfires. At the time, a new building for the school was under construction, and the flames swept within 10 feet of it, but did not burn it. Today, the new building, precariously threatened by the blaze which has already burnt hundreds buildings and charred 200,000 acres, is school to 400 children, and a community center for their families and others.

But Fradkin, who spoke to Lubavitch.com as he was evacuating his own family after ensuring that every one of the school’s students and their families were safe, is optimistic.

“We’re doing everything we can, and the community has pulled together to be helpful and supportive,” Rabbi Fradkin told Lubavitch.com.

For information on relief efforts in Rancho Santa Fe, click here or go to www.ranchosantafefirerelief.com

For information on relief efforts in Scripps Ranch, click here.

To locate any of the Chabad representatives in San Diego, click here.

For information on relief efforts in Rancho Bernado/Poway, click here.