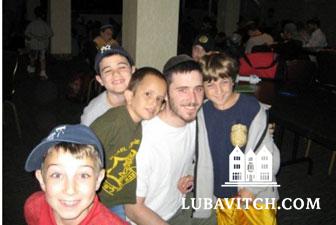 Shimmering above the weatherman’s smile is a headline forecasting “Deadly Heat.” Next week’s weather predictions for Glendale, AZ, sizzle between 108 and 111 degrees.

Beating the heat complicates Rabbi Sholom Ber Lew’s goal to convince parents to send their children to a Jewish camp. The closest Jewish day camp is 20 minutes away, not far, but it’s a brutal commute if the family car’s air-conditioning isn’t arctic quality.

Once the heat and commute have been overcome, the next hurdle between children and a Jewish summer is not exclusive to Glendale. It’s a matter of money.

Chabad-Lubavitch’s 400 Gan Israel camps worldwide stretch their budgets to ensure 120,000 children enjoy a Jewish summer experience. In a 2002 study conducted by the Center for modern Jewish Studies at Brandeis University, Chabad camps were among those found to “not only charge the lowest tuition but also support a significant percentage of campers who otherwise might not be able to attend summer camp.

We have a no child left behind policy,” said Rabbi Mendy Solomon, co-director of Sherry Wilzig-Izak Gan Israel Day Camp in Morristown, NJ. Throughout the year, while his wife and co-director Chana Devorah Solomon plans activities for the camp’s five divisions and 500 campers, Rabbi Solomon raises funds for scholarships. Nearly one out of every four campers receives some form of financial assistance to attend.

Still more get the cash boost they need to take part in camp through local Chabad rabbis who channel community members to the Morristown camp from as far as 25 miles away. Cases of extreme need comprise some of the demand for financial aid. Four siblings from out of state are summering in New Jersey while their father serves in Iraq. A pair of young sisters joined camp gratis after their 33-year-old father suffered an unexpected, fatal heart attack.

At Chabad of the Valley in Encino, CA, several campers have parents serving time in jail; another lives with grandparents while her mother recovers from an addiction. But these children with sensational life-stories are a miniscule minority in the tuition-break pool, said longtime camp director Rabbi Mayer Greene. Most parents come to him for help because they are tapped out. Jewish day school tuitions have gone out of control,” said Rabbi Greene. “Some people are paying their kids’ school tuition over all twelve months, and others need a break over the summer” to recover from the strain. Another set of parents get breaks because they’re not convinced that Jewish camp is worth the extra money and will send their children the local “Y” where hours are shorter, but costs are lower.

In the CIS, where Jewish camps are not quite the foreign commodity they were when the Iron Curtain first fell, most parents pay nothing or a symbolic fee – as low as eight dollars a week – to send their children to any of Chabad’s 50 camps. The 80 children frolicking in the rustic outdoors of Vinnista, Ukraine’s new camp, owe their summer to stalwart supporters like Lev Leviev, president of the Federation of Jewish Communities in the CIS. Across the former Soviet Union, the cost of presenting more than 15,000 Jewish children with a summer of Jewish experiences is estimated in millions of dollars. An all-volunteer staff, college age men and women who often raise money to pay for their flights to Russia, Ukraine, Siberia and beyond, keep budgets as lean as possible.

Chabad centers toil year ‘round to bring children to camp, largely because of the emphasis placed on camp by the Lubavitcher Rebbe Rabbi Menachem M. Schneerson, of righteous memory. Over a 45-year period, the Rebbe left the New York City metropolitan area only three times, and every time he left it was to visit a Gan Israel camp.

The Rebbe viewed summer not as a vacation from Judaism, but as prime time to catch up on Jewish expression and study. In an open letter to schoolchildren written in 1974, the Rebbe wrote: “Summer vacation seems to be so well planned for this purpose, for it is a time when you can devote yourselves to Torah study and Torah activities in particularly agreeable circumstances: in a relaxed frame of mind and in pleasant natural surroundings of sunshine and fresh air.

Studies conducted decades later by scholars of modern Jewish life have borne out the Rebbe’s observation. Professor Bruce Phillips of Hebrew Union College found attending a “Jewish summer camp is a more powerful predictor of ‘endogamy’ (marriage within the faith) than Jewish day school. Rabbi Greene sees proof of camp’s role in providing for Jewish continuity every morning of the summer. Of Gan Israel of the Valley’s 510 campers, nursery age through teens, 35 are the children of his former campers.

Related Articles
View All
Lubavitcher Rebbe Proposes Summer Time Be Used for Fortifyting and Expansion of Jewish Education
New York (LNS) May 4, 1977 “The summer vacation period should be utilized for fortifying and expanding the Jewish education of children,” said the Lubavitcher…
Education
Two Universities React as Antisemitism Steps Out of the Shadows
While college administrators debate the limit of free speech, Chabad campus leaders take action.
Education
A Hebrew School Becomes A Community
How has one innovative Hebrew School made the Big Apple the city of choice for Jewish families?
Education
Growing Gains in Toronto
Even as he cut the ribbon on the doors of the Romano Chabad Centre, Rabbi Mendel Bernstein knew it was too small.
Education
Can An Underfunded School Actually Transform a Community?
Small Jewish day schools—those with less than 100 students—occupy a fragile place in our society. Located outside of centralized Jewish communities, these schools must fight…
Get Inspiration to your inbox!
Newsletter
Join our weekly newsletter for inspiration and updates
Donate
Find Your Local Chabad Center
Chabad
About Chabad-Lubavitch
About Chabad Lubavitch
The Rebbe
Headquarters
Magazine
Magazine
News
News & Updates
In The Media
Impact
Social and Humanitarian
Social and Humanitarian
Education
Education
Community
Community