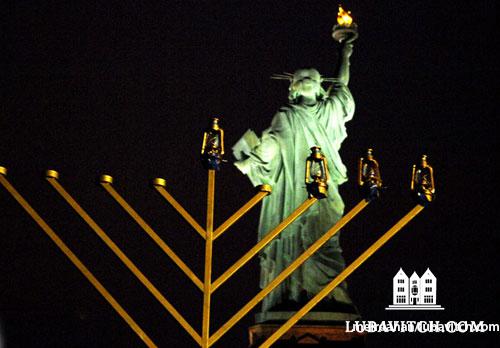 The menorah, with the Statue of Liberty in the background.Photo: M. Dahan for Lubavitch.com

(lubavitch.com)Freezing temperatures and icy winds whipped Liberty Island off the New York harbor Tuesday night. Hardly a night for a boat ride with the kids, but that didn't stop several hundred adults and children, plus distinguished city and state officials, who came out into the cold to celebrate a unique Chanukah lighting.

“Tonight we are here with bittersweet feelings,” said Rabbi Yehuda Krinsky, Chairman of the Lubavitch social and educational divisions. “Sweet, because 2000 years later, we—the Jewish people—yet stand here in celebration of our miraculous continuity. Bitter, because there remains considerable darkness in the world we live in,” he said, referring to the recent terror in Mumbai, which “has cast a dark shadow upon our civilization.”

Rabbi Nachman Holtzberg, father of the murdered Chabad Rabbi Gabi Holtzberg was honored with kindling the lights at the foot of Lady Liberty.

The event was one of many public menorah lightings across the country, part of Unite the Lights, a coordinated effort by Jewish organizations to remember the victims of Mumbai while promoting unity and goodness around the world. M Generation, a popular boys chior by F.R.E.E (Friends of Refugees of Eastern Europe) beat the cold with great live musical entertainment.

In his remarks, Rabbi Krinsky noted that this Chanukah lighting at the Statue of Liberty was in the same vicinity of other terrorist targets, namely the Twin Towers, and the ramp on the Brooklyn Bridge where Ari Halberstam was gunned down by Muslim extremists. Krinsky exhorted the United States to work with other foreign governments to eliminate terror. “Whether in India, in Great Britain, in Israel, or in these great United States, the ugly claws of terror reach wherever they are permitted."

“I call on all governments of the world to put differences aside and unite to find ways and means to eradicate the evil of terrorism from our midst, for G-d’s sake and for the sake of the world.

Following the menorah lighting, Rabbi Holtzberg headed to the airport to catch a flight to Mumbai, where Thursday evening, he will join other family members at a public menorah lighting, continuing a tradition established by Gabi and Rivka in their years serving Mumbai’s Jewish community.

Despite the great pain to the family of Shluchim, said Rabbi Krinsky, “they will move forward in number and in reach, empowered by their resolve and their mission to illuminate the darkest corners of this world with the light of their joy, their goodness and the sanctity of their calling.”