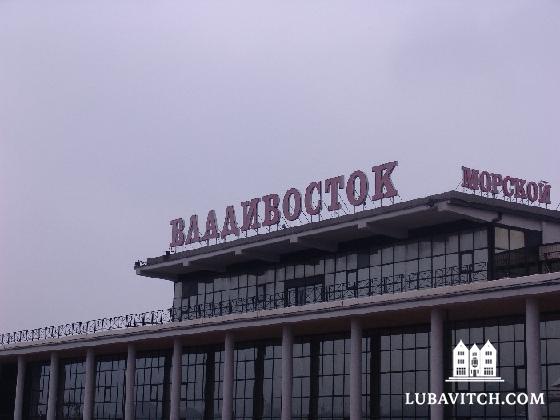 (lubavitch.com) Following their recent expulsion from Russia, several rabbis have been working across phone lines and emails guiding their communities in Passover preparations.

Chabad representatives Rabbi Yisroel and Aliza Silberstein were living in Vladivostok, a port city on the Pacific Ocean, until they were forced to leave in February. Now, from their temporary residence in Brooklyn, the dedicated couple is still taking care of their community’s needs.

“We are in constant touch with the people of Vladivostok with daily telephone calls and emails,” Silberstein told lubavitch.com.

A week after the Silbersteins' deportation, their colleagues serving the Jewish community of Stavropol were also expelled. Rabbi Tzvi and Chaya Hershcovich moved to a new apartment a month ago. Because they did not register their new location within three days, the youthful rabbi was arrested and together with his family, quickly deported.
While waiting anxiously for a decision by the Russian courts that will allow them to return, the rabbis say they are doing whatever they can to ensure that their communities are not rudderless during the eight-day Festival of Freedom which begins Wednesday night.

Rabbi Hershcovich sent 700 kilos of matzah to members of his community and two nearby cities. He also worked long distance to arrange for a local restaurant to be koshered for the holiday meals.

The rabbis are especially grateful, they say, for the help of Chabad’s rabbinical students who have traveled to their respective cities as part of the worldwide Chabad-Lubavitch Passover Seders emanating from Lubavitch Headquarters. With help of the FJC in Moscow, they’ve made all the necessary arrangements for the seders, which they will lead.

Rabbi Silberstein has been providing tips and practical suggestions to the young students in order to make the seder “the most fulfilling and satisfying as possible.” Over 100 people are expected at the seders in both Vladivostok and Stavrapol, numbers that reflect the Jewish revival the rabbis and their wives have spawned in their cities.
“We arrived almost three years ago to a city very little Jewish infrastructure,” says Rabbi Silberstein. “Since then, we have helped create a real community.” Though people of all ages attend services and events, Silberstein has cultivated a “strong core of individuals between the ages of 18 and 40 who are really dedicated to kosher, Shabbat, and holidays.

“Right now, our community is expressing strong distress and the need for leadership. Although we are filling those needs to the best of our ability, it is very hard to do so from so far away. I just hope that the Russian government will understand that they are not punishing me; they are punishing the Jewish community of Vladivostok. I hope we can work this out.”

Rabbi Silberstein told lubavitch.com that he has “received tons of emails and hundreds of messages on my Facebook page begging us to come back.”

In a letter to Russia’s Chief Rabbi Berel Lazar and Chairman of the FJC (Federation of Jewish Communities), 189 members of the Stavropol community, pleaded with him to what he can to have their rabbi returned to them. Rabbi Lazar is working, he says, to facilitate their return.

Though a well-attended Hebrew school, youth programming, and classes for young adults have all been put on hold, Silberstein glimpses a silver lining on this dismal cloud.

“I definitely see that it has helped people become more actively involved in community affairs,” he says.

Both Silberstein and Hershcovich talk of their communities in the present tense, and both clearly want to return.

“There are a couple thousand Jews in Stavropol,” explained Hershcovich. “Someone needs to take care of them, and we are here to do that. We definitely plan to go back and are working hard to get there. Our apartment is still all set up and waiting for us.”

For now, on the eve of the holiday of the four questions, the Silberstein’s young son has been asking a question of his own.

“When are we going home? I want to go to Vladivostok,” implores three year old Mendel Silberstein.

“We tell him that we hope we will be there soon. And that all he can do is pray.”

As the holiday sets in and Jews everywhere sit down to retell the story of the Jewish people, Passover themes of exile and dispersion will resonate personally for these Chabad rabbis and their families, separated from their communities, yearning to return.

Related Articles
View All
Chabad Lubavitch World Headquarters “Deeply Disturbed” At Russian Court’s Decision To Expel Rabbi
Russia’s Chief Rabbi Lazar To Appeal A Russian district court on Wednesday overturned an appeal and upheld its ruling to expel Rabbi Yisroel Silberstein, Rabbi…
Russia’s President Medvedev: Government Should Not Interfere With Religious Life
(lubavitch.com) At a meeting Wednesday with religious leaders in Russia, President Dmitri Medvedev promised to instruct his staff and heads of security regarding policies of…
Features
Coming Back From Cancellation
The notorious practice of “cancellation” suggests that our society has forgotten how to forgive, and how to make amends. What is the Jewish perspective? Here…
Features
Remembering Rebbetzin Chana: Jewish Feminine Role Model
A feminine role model of Jewish activism and proponent of Jewish scholarship, is being remembered today, on her yahrzeit.
Features
Grateful or Entitled?
I am concerned about what kind of people are we raising, and I want to reverse this shift in our family that is making our…
Features
Howard Glowinsky: Letter To My Children
Individuals who have come to Torah study as adults reflect upon something that they have learned
Get Inspiration to your inbox!
Newsletter
Join our weekly newsletter for inspiration and updates
Donate
Find Your Local Chabad Center
Subscribe
|
Log In
Chabad
About Chabad-Lubavitch
About Chabad Lubavitch
The Rebbe
Headquarters
Magazine
Magazine
News
News & Updates
In The Media
Impact
Social and Humanitarian
Social and Humanitarian
Education
Education
Community
Community