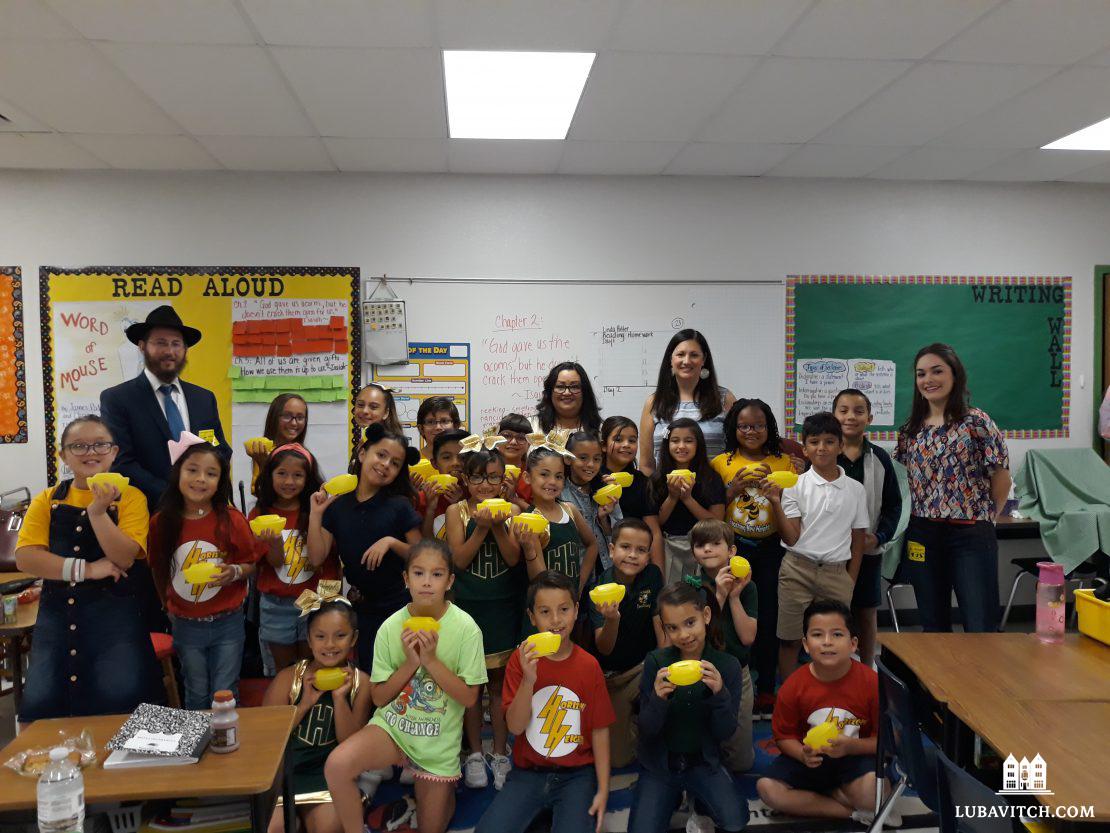 Gavin Katz is a South African businessman, so what does he have in common with a high school student from El Paso, Texas? The answer revolves around a special little charity box that has made its way into American schools all the way from Johannesburg, South Africa.

Before setting out on long cross-country drives, Mr. Katz visits Rabbi David Masinter, director of Chabad of Johannesburg. There, Gavin picks up hundreds of yellow charity boxes shaped like boats — more specifically, arks. “I fill my car with arks,” he says, “and whoever I meet, whether a hitchhiker or a petrol attendant, I give them an ark and a little money.”

“Fill it up,” he tells them, “and pass it along to someone who needs it more than you.”

Why an ark? “It’s an acronym for Acts of Random Kindness,” Rabbi Masinter explains. He began manufacturing the yellow plastic vessels in August of 2014, hoping to promote routine charity and spark a wave of positivity. “The Lubavitcher Rebbe’s message to the world was to increase in acts of goodness and kindness,” he explains. “Charity is the best way I can think of to bring his message to life.”

Within a month of the launch of the ARK program, Johannesburg’s most prominent newspaper ran an editorial on the initiative. Within the year, Rabbi Masinter’s organization, Miracle Drive, had distributed nearly one hundred thousand ARKs. A smattering of publicity and celebrity endorsements helped, as did the tireless devotion of staff and volunteers, and the momentum kept building. Rabbi Masinter reckons 800,000 ARKs have been filled up and given to a needy person. “I have no idea how much money people have raised,” he says, “but that’s the point.” It was always about kindness, not fundraising.

The project has become a phenomenon in South Africa. Still, it wasn’t until one volunteer who worked on the project, Rabbi Moshe Hecht, opened a Chabad House in Hamden, Connecticut, that the little yellow charity boats began floating around the United States. Rabbi Hecht had started spreading the word to fellow Chabad emissaries across the United States when, in 2017, a Chabad rabbi in El Paso, Texas, decided he wanted to place a charity box in the hands of every public school student in his city.

“We’re trying to stop school shootings here,” Rabbi Levi Greenberg said. Across the table, several educators at the El Paso Independent School District slowly began nodding. They were developing a plan to give every school child in El Paso, Texas, an ARK. “It’s not about raising money. It’s about raising a generation of kind people,” he elaborated.

Each year, Rabbi Greenberg had watched the White House and all fifty states celebrate the devotion of Rabbi Menachem Mendel Schneerson, the Lubavitcher Rebbe, to education. Proclamations across the nation mark the anniversary of the Rebbe’s birth as Education Day USA. “The Rebbe placed huge significance on moral education,” Rabbi Greenberg says. “He taught us that education isn’t just preparation for a career. It’s about building moral character and teaching children to be kind and respectful of one another.”

“I got it into my head that we need to get a pushka (Yiddish for charity box) into every El Paso public school student’s hands,” he recalls. When Rabbi Hecht introduced him to ARK, Rabbi Greenberg knew it was just what he wanted. Now he just needed a foundation willing to back the project and provide the required resources. Rabbi Greenberg pitched the idea to a journalist. The journalist referred him to a lawyer — who loved it. The lawyer and his wife recommended Rabbi Greenberg to the El Paso Community Foundation, a prestigious foundation in town and the force behind numerous local educational initiatives.

“How can we educate children to be good people?” Rabbi Greenberg asked in his meeting with Eric Pearson, president of the El Paso Community Foundation. “Either you preach to them to be good, or you train them to do good.” He argued that the ARKs could train children to act kind, think kind, and become future philanthropists. “If you give a large sum to charity once, it’s great for the recipient,” Rabbi Greenberg said, “but if you give a small sum consistently, you become a giver.” Enthused with the idea’s potential, Mr. Pearson green-lit a pilot project.

In 2019, an El Paso private school called a school assembly. A presentation introduced routine charity to the children, and every student, kindergarten through high school, received a little yellow ARK. A month later, Community Foundation volunteers were back with buckets, and everyone watched as each child deposited a few coins, bills, and sometimes a note of a kind deed. They voted to donate the funds to a local food bank, and the foundation wrote out the check — a whopping $1,200.

At the Community Foundation, the highlight came as an email. A high school student who crossed the U.S.-Mexico border from Juarez, Mexico each day thanked his principal for running the program. “I never noticed the condition of the poor people in Juarez before,” he wrote, “but giving charity made me more sensitive to the plight of those less fortunate than myself.” They celebrated the pilot program as a success, and Rabbi Greenberg reached out to Manuel Castruita, Director of Counseling & Advising for the El Paso Independent School District.

“We were rolling out a curriculum to build core social-emotional learning competencies,” Mr. Castruita remembers. He immediately saw the educational potential of the ARKs. “It gives children social awareness,” he says, “it teaches them there are others who have needs, and you can help them. Regardless of your age, or socioeconomic status, there is something you can do.” The idea came at a perfect time because the district was looking for activities to supplement its social-emotional learning curriculum. “It was a perfect juncture to manifest some goodness for students,” Manuel says.

The school district ironed out the details and set the program to launch in the spring of 2020. But COVID put everything on hold. It would be over a year before the school district called Rabbi Greenberg to say they were finally going ahead with ARK. But first, the El Paso Independent School District gave each employee an ARK.

Mr. Castruita chokes up, remembering the day everyone brought their ARKs into the office and combined the change. “At first, it didn’t seem like a lot, but everyone brought in their ARKs, and we could feel the momentum building,” he says. “It caused us to reflect because no matter how small our contribution, when we do something positive collectively, there’s mass-energy. People were very touched by that; it was a moment of joy.” When ARK launched in five schools, that moment of joy was replicated for nearly four thousand students. This coming school year, ARK will finally launch across the entire district, and similar large-scale ARK programs are set to go ahead this year in Atlanta, Georgia; Waukesha, Wisconsin; and St. Louis, Missouri.

“A charity box creates an opportunity for kindness, “Rabbi Greenberg says. “Every time a person puts in a coin, they change just a little bit and become just a little kinder.”

In Connecticut, Rabbi Hecht launched the ARK program beyond the schools. By now, neatly designed boxes of ARKs are stationed in bank lobbies and grocery stores, and local media has covered the new “Kindness Coalition” in town. Rabbi Hecht has seen the arks go viral twice on two different continents. “They’re a novel way to promote charity,” Rabbi Hecht says, “and they allow everyone to put any differences aside and make a positive impact together.”

Back in Johannesburg, where it all began, Rabbi Masinter has set up two massive public art pieces to spread ARK’s message, and is putting up a third. The colorful sculptures sum up the worldwide campaign’s message perfectly in just two words: Be Kind.

Related Articles
View All
Humanitarian
Ep. 28: From Kabul To Fremont: An Afghan Family Moves Into A Chabad House
The 28th episode in its series about the personal struggles and achievements of Chabad representatives
Humanitarian
A Quarter Million Meals From Chabad of Nigeria
As part of Chabad's humanitarian efforts to combat hunger in Nigeria, a quarter of a million meals were distributed to single-parent families last week, just…
Humanitarian
Aleph Rescues Afghans from Taliban
When the Taliban started sending him death threats, Fazel Malek* had to leave his wife and daughter behind in Kabul, Afghanistan. After a team of…
Humanitarian
Hot Meals For Rostov’s Isolated Elders
Since Covid locked Rostov’s elderly in their apartments, Rabbi Chaim Danzinger and his team hand-deliver hot meals each day
Get Inspiration to your inbox!
Newsletter
Join our weekly newsletter for inspiration and updates
Donate
Find Your Local Chabad Center
Subscribe
|
Log In
Chabad
About Chabad-Lubavitch
About Chabad Lubavitch
The Rebbe
Headquarters
Magazine
Magazine
News
News & Updates
In The Media
Impact
Social and Humanitarian
Social and Humanitarian
Education
Education
Community
Community