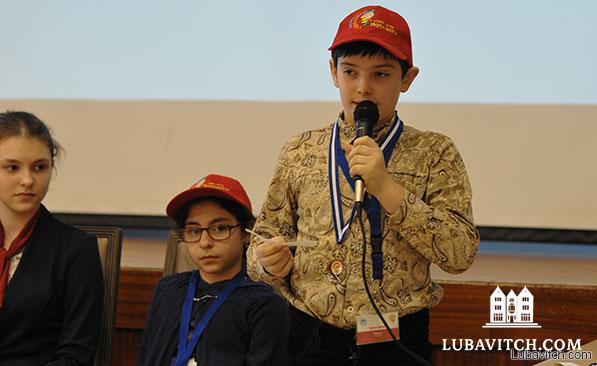 A contestant presents his ideas on a specific Jewish subject in Jerusalem.

Sixty finalists of the Darkeinu Olympic Jewish heritage quiz were flown to Israel from countries in the Former Soviet Union for the final stage of the competition in Jerusalem, last month.

The finalists competed with 1400 students at the ninety Or Avner Chabad Jewish Day Schools, acing exams on a Judaic studies curriculum designed for the children in the Former Soviet union.

Prior to the trip, the finalists conducted a 1500 word research paper on one of the Jewish calendar months. At the competition in Jerusalem they impressed Israelis judges who compared Jewish education in Israel with the Or Avner Chabad day schools.

“It is unbelievable to see the extensive amount of knowledge these children have in Jewish heritage. It is amazing when you think where Jewish education was in the region just a generation ago,” said Dr. Yona Schneider, one of the judges.

The final six competitors were handed a card with two ideas, personalities, or events written on it, and were challenged to explain each subject and then the relationship between them. The winners, Arena Gustrakinha from Saratov, Russia; Partuna Malka from Dneprodzerzhinsk, Ukraine; and Bella Diakova from Moscow, Russia, took home a selection of digital prizes including phones and laptops, as well as medals and certificates.

Related Articles
View All
A Different Kind of Olympics in the Former Soviet Union
While Russians were preparing for the Winter Olympic Games of 2014, thousands of pupils at Or Avner Chabad Jewish Day Schools in the Former Soviet…
Fact or Fantasy? Jewish Life in the Former Soviet Union
Bukharan drummers, fireworks and giant sized video screens flashing a specially designed logo with the words, ha-Lev im haShluchim—meaning, “the heart is with the Shluchim,”…
New Courses in Jewish Texts For Millennials in Former Soviet Union Cities
Twenty new academies of higher Jewish learning in the former Soviet Union opened their doors in the past month. The move spells a dramatic shift…
Education
I Will Learn It on a Train, I Will Learn It in the Rain
What was once the province of an elite few is now available for free online in every language
Education
Vienna Springs into Action to Take In Ukrainian Students
The Lauder Chabad School in Vienna is going to extreme lengths to accommodate 700 Ukrainian refugee families—free of charge.
Education
110 Schoolchildren Show Off Jewish Knowledge at Championship Game Show
On March 13th, one hundred and ten Jewish schoolchildren marched into a Princeton, New Jersey ballroom for CKids’ annual JewQ International Torah Championship 5782 and…
Education
Tuesdays With Steve
Berger’s pomegranate trees are so verdant that every student picks his own glossy red fruit to bring home each Rosh Hashanah
Get Inspiration to your inbox!
Newsletter
Join our weekly newsletter for inspiration and updates
Donate
Find Your Local Chabad Center
Subscribe
|
Log In
Chabad
About Chabad-Lubavitch
About Chabad Lubavitch
The Rebbe
Headquarters
Magazine
Magazine
News
News & Updates
In The Media
Impact
Social and Humanitarian
Social and Humanitarian
Education
Education
Community
Community