During Israel visit in response to soldier’s killing, rock singer dons tefillin at the Kotel 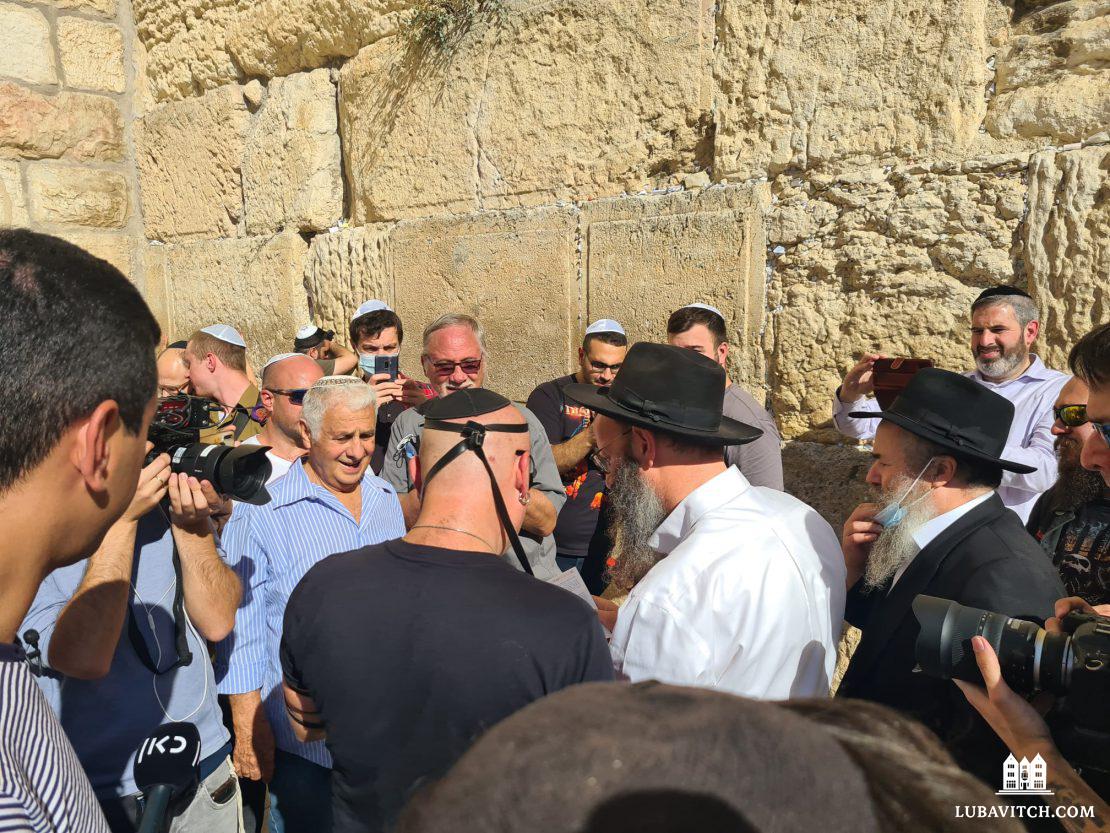 Camera crews jostled with security personnel, reporters, and fans as heavy metal star David Draiman made his way across the plaza towards the Kotel (Western Wall). A young man dressed in typical Chasidic garb cut through the throng and approached him. “David, would you like to put on tefillin?” asked Rabbi Shmuli Weiss, Chabad representative to the Kotel. “Aww, it’s been so long since I’ve done that,” the singer replied.

As fans watched and cameras flashed, David wrapped tefillin and said the Shema prayer. “Lubavitchers will always take care of you,” he remarked as he posed for a picture with Chabad at the Kotel representatives.

The American singer/songwriter, most famously known as the lead vocalist for the heavy metal band, “Disturbed,” is in Israel on a six-day visit in response to last week’s terrorist attack in which South African Lone Soldier Eli Kay, 26, was shot dead, and four others wounded, by a Hamas terrorist. Draiman told the Jerusalem Post that he came to Israel to make a statement in light of the biased reporting of the event in the media. “The coverage was reprehensible in the vast majority of American and European media,” said Draiman. “It’s scandalous how they presented it. Headlines like ‘Palestinian shot dead.’ Well, why was the Palestinian shot dead? Because he was perpetrating a terrorist attack. I love how the context is always flipped around.”

David lit a candle at the spot where Eli was murdered and prayed at the Kotel. “A truly wonderful day,” he captioned the pictures he shared in his Instagram post.

Related Articles
View All
Israel
Triple the Numbers! CTeen Summer Inspires Jewish Pride for Public School Students
Yakov Vinnik went from being asked to wrap tefillin at the White House, to sharing the mitzvah with a fellow Jew in Warsaw, Poland. That's…
Israel
Tisha B’Av: Remembering for a Better Future
This evening, Jews around the world will remove their shoes, begin a 25-hour fast, and sit low on the floor in the manner of mourners.
Israel
Rabbi Yehuda Krinsky Visits Ukrainian Orphans
Secured by Chabad Headquarters, a generous grant allows the weary Zhytomyr community to begin rebuilding their lives
Israel
Israeli Chabad Rabbi Fatally Stabbed in Be’er Sheva
We are saddened and shocked by the brutal murder of Rabbi Moshe Kravitzky in a senseless terror attack near his home in Be’er Sheva, Israel…
Get Inspiration to your inbox!
Newsletter
Join our weekly newsletter for inspiration and updates
Donate
Find Your Local Chabad Center
Subscribe
|
Log In
Chabad
About Chabad-Lubavitch
About Chabad Lubavitch
The Rebbe
Headquarters
Magazine
Magazine
News
News & Updates
In The Media
Impact
Social and Humanitarian
Social and Humanitarian
Education
Education
Community
Community