Decoding the Origins of Jewish Tradition 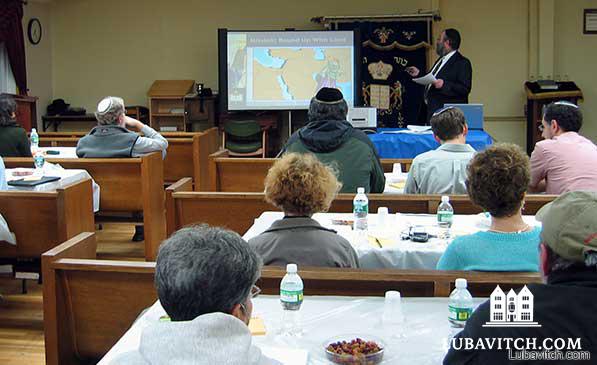 A JLI class in Sharon, Massachusetts.

“If we have a written law, why do we need tradition? And if we have a tradition, what’s the point of a written law?” This question is being posed in a course by the Rohr Jewish Learning Institute (JLI) Judaism Decoded: The Origins and Evolution of Jewish Tradition.

Set to begin in early May, the course promises to examine the differences between the Biblical writings and the Talmudic, Jewish law, and myriad of volumes of Jewish scholarship.

In six classes, conducted at 357 locations in 7 languages, will lay down the basics of Jewish scholarship. “We spend a lot of time building on how Jewish scholarship developed, the lessons in our daily life, but not so much on the foundation,” says Rabbi Mordechai Dinnerman, Director of Curriculum Development for JLI, the adult education arm of the Chabad-Lubavitch movement. This course, he explains, will challenge the basic premises of the teachings.

Authors of the course promise that participants will “Discover the sheer elegance of the ‘source code’ on which Torah law is built; enjoy the razor-sharp reasoning, intelligent debate, and compelling arguments of the Talmudic dialectic; and get a fascinating, behind-the-scenes glimpse of the most intellectually sophisticated religion in existence.”

The course was authored by Rabbi Berel Bell, a justice (Dayan) at the Rabbinical Court of Montreal, and a prominent authority on Jewish law, and the staff at JLI. It is based primarily on the teachings of Maimonides.

Dinnerman says that most surprising to the students may be the “significance of the human contribution that is required in Torah.” This, he says, is the greatest question many people have when approaching Jewish teachings. Thus the course promises to “explore the systematic formula through which Jewish law is applied to solve new, modern-day dilemmas.”

To join the course in your area, go to myjli.com.

Related Articles
View All
Learning Parenting To Raise Healthy Children
A parenting course that looks to Jewish values that have stood the test of time may surprise participants as it cuts the sacrosanct “what are…
Chabad’s Jewish Learning Institute To Probe Fundamentals of Faith
(Lubavitch.com/LNS) How did the world get here? If the Universe has a Creator, does He run the world? How does G-d communicate with us? Who…
Chabad Unveils Talmudic Study Program In 15 Cities
(Lubavitch.com/LNS) Yeshiva boys typically crack their first Talmudic sugiya (problem) at a young age. The dense Aramaic text, the endless back and forth of argument…
Chabad’s Jewish Learning Institute Comes to the University
It was developed as an educational program that would provide adults in Jewish communities the essentials of Jewish literacy. Since its establishment several years ago,…
Jewish Learning 10,000 Feet Above Sea Level
Ed Brown covered over 970 miles of blacktop and jaw-dropping mountain passes to make his way to the first annual National Jewish Retreat from his…
JLI Launches Advanced Women’s Study Division
The Rohr Jewish Learning Institute, pioneer of adult Jewish education, is breaking new ground with its latest division–a women’s only study program that debuts this…
Get Inspiration to your inbox!
Newsletter
Join our weekly newsletter for inspiration and updates
Donate
Find Your Local Chabad Center
Chabad
About Chabad-Lubavitch
About Chabad Lubavitch
The Rebbe
Headquarters
Magazine
Magazine
All Magazines
News
News & Updates
In The Media
Impact
Social and Humanitarian
Social and Humanitarian
Education
Education
Community
Community